One of the more interesting boards we have tested is the MSI P55-GD65. This particular motherboard is aimed straight at the enthusiast/gaming audience who wants CrossFireX or SLI capabilities at a midrange price of $160. Like our recent review of the Gigabyte GA-P55M-UD2, we purchased the MSI P55-GD65 motherboard and tested the board and applications without any contact with MSI in order to approximate a true user experience. After spending significant time with the board, we have to say that MSI has produced a terrific board, but one with a few warts. Unfortunately, most of these warts could have been completely avoided with some forethought or as is apt to happen with MSI, additional BIOS tuning. 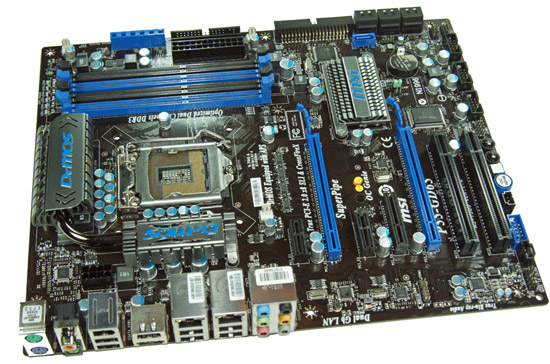 Let’s get to the warts that we found and then discuss a few of the better features that MSI has enabled on this board. We found it perplexing at best that MSI included features for the overclocking audience like the base-clock, power-on, and OC Genie buttons but completely left off features like reset and clear CMOS buttons. The oddly placed JMicron SATA port (seventh port - blue) seems like someone played pin the tail on the donkey for the location when it could have been placed at the top of the board next to the V-Check connector or even as a second eSATA port on the I/O panel. The inclusion of a floppy drive port and even IDE port are also questionable for a board in this category. Otherwise, the layout of this board is just fantastic, especially the PCIe/PCI layout.

The OC Genie overclocking technology could not be easier to use and it works exactly as MSI advertised. Even the 3.3GHz i5/750 and 3.7GHz i7/860 generated overclocks on perfectly acceptable voltages pleased us. We think MSI could have squeezed more out of the i5/750 and improved memory timings a little better, but at least the results made a difference in everyday usage without any fuss. Yet, this feature had a dark side.

It refused to work with several of our test power supplies and we are not talking $35 no name units (they all worked perfectly), but some of the best power supplies from Corsair, BFG, Thermaltake, and others. We could grant a pass on this if it was just one power supply, but we noticed a definite pattern with this board and its big brother, the P55-GD80 when using Channel Well based power supplies.

One area that just drove us crazy at times was overclocking various memory modules. The BIOS features 25 different settings for memory timings and each can be changed on a per-channel basis. Unlike other BIOS releases we have tested, you cannot change the timings of both memory channels with a single entry. Also, under manual mode, there are no auto settings for each memory timing option. So, instead of changing the four basic timings and maybe fine tuning tFAW, tRFC, and B2B only, the user is left with manually setting each sub-timing properly. For a lot of users, this will cause significant additional tuning time to make sure every memory setting is properly set when overclocking. Of course, you will get a crash course on memory tuning so that is a silver lining in the cloud.

Your other choice is to simply leave the memory timings on auto and hope for the best. We say hope for the best because if your SPD is not setup properly with several settings based on memory clock speeds, you could be running your memory at higher than advertised timings or getting stuck in an endless loop when overclocking. We had several modules (1600+ kits) that offered just a couple of memory SPD timings. They were fairly aggressive C6/C7 timings for 1066/1333 clock speeds, yet when we tried to overclock our memory to 2000, these settings were utilized and obviously the board did not POST.

On one hand you can blame the memory suppliers, but these same modules worked perfectly in other boards at high memory clocks. Fine tuning of the BIOS would solve most of these problems, including some tightening up of Vdroop variations that were around 0.05V under load with LLC disabled and an overshoot of 0.03V when enabled. Vdroop follows Intel’s guidelines, but on a enthusiast inspired board like this, it is possible reduce it and not have to enable LLC when overclocking, especially with MSI's excellent hardware design.

The only other two items worth mentioning is that S3 resume worked perfectly up to a 190bclk, after that, this board would not properly resume. We also had a few problems with PCIe speeds above 103 being stable. Both of these will only affect the more adventurous overclockers, but even our sub $100 ASRock P55M Pro had no problems with S3 resume up to a 215 bclk or PCIe speeds up to 110MHz.

Now, that might have sounded like a long list of dirty laundry items but overall this is still an excellent board. MSI's power consumption numbers are first rate and even match or exceed those of boards with less peripherals and slots at idle and near stock conditions. MSI’s continued use of their DrMOS hardware allows for these impressive power consumption numbers and provides for some excellent overclocking results. We also have to hand it to MSI for not playing the “More Phases are better…” game that Gigabyte and ASUS seem to be locked into at this time.

In the end, this board offers a great overclocking experience for users on air or water, especially with an i7/860 as Bclk rates can be kept lower while still hitting current CPU limits and keeping S3 resume enabled. While the board had problems clocking our i5/750 with 8GB of memory above DDR3-2000, running the memory in the DDR3-1680 range at C7 timings offered the same if not better performance as the same memory at DDR3-2055 with C9 timings.

All that said, the MSI P55-GD65 has a great layout, extensive BIOS options, excellent power consumption, and class leading performance in several benchmarks. If the board did not carry a few warts that either could have been solved easily in the design phase or with some additional BIOS tuning, it would certainly be at the top of our list in the mid-range P55 market. So while we were frustrated at times, our overall feeling is that this board deserves your full attention and should be on anyone’s short list when considering a P55 motherboard. Some additional BIOS tuning would make this board award worthy, maybe not in Gold territory, but definitely on the podium.