With Cypress pared down some for the 5850, the power/temperature/noise situation takes on a different look. The 5870 ended up being hot, noisy, and more power-hungry than any other single-GPU setup under load. Let’s see if the 5850 can avoid that. 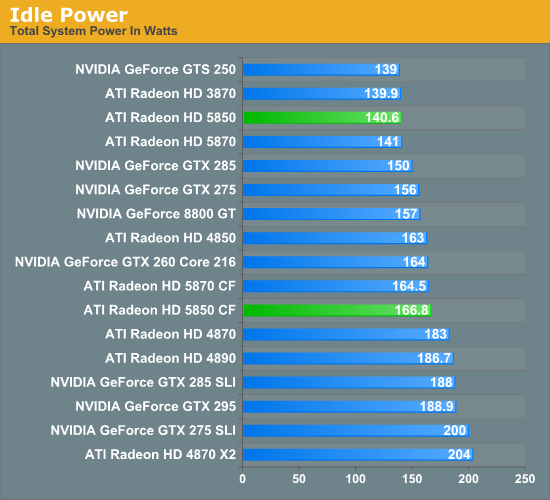 Looking at idle power, the results are the same as the 5870. This is to be expected as both are capable of reaching the same low idle power state. Crossfire results are similar, although the 5850 CF nudges itself higher than the 5870 CF on our charts; but this is within experimental variance. 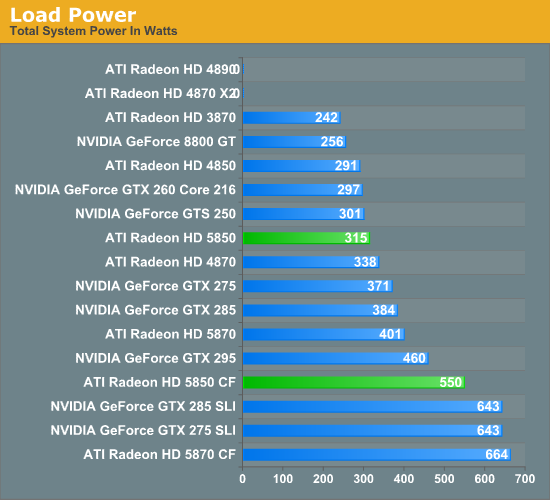 Load power on the other hand gives us a surprising difference. While the 5870 was one of the most power-hungry single-GPU cards we tested, the 5850 moves half-way down the chart. At load it uses less power than 4870 and most of the GTX series, in effect using less power than all of its closest performance competitors. In fact the difference in load power is beyond the specs; AMD’s specs call for a 37W difference, but here we have an 86W difference. Even after accounting for power supply inefficiencies, this is still a huge difference. We’re not seeing clock throttling occurring, so at this point we don’t have a complete explanation for what we’re seeing beyond the fact that we’re sure these are legitimate results.

As for Crossfire, this gap closes somewhat in that configuration. Here it’s only 114W under the 5870 CF, and just 93W under the GTX SLI cards. Even with its low power usage, the 5850 can’t erase the fact that multi-card solutions eat much more power than single-card solutions; it’s 90W over the GTX295, for example. 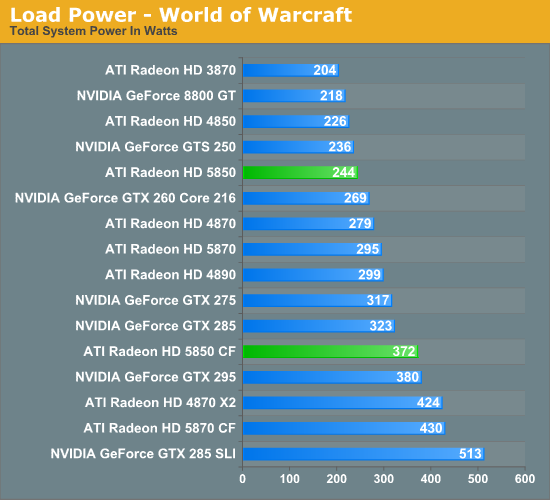 We’ll also take a look at power usage in Warcraft quickly, since it doesn’t trigger throttling in our other AMD cards. Warcraft doesn’t push these cards like OCCT does, so the overall power usage is lower, but the overall situation is virtually the same. The 5850 comes in at 55W less than the 5870, and this time bests the entire GTX lineup by at least 25W. We also see Crossfire do better here; now the 5850 CF can beat even multi-GPU cards like the 4870X2 and the GTX 295. 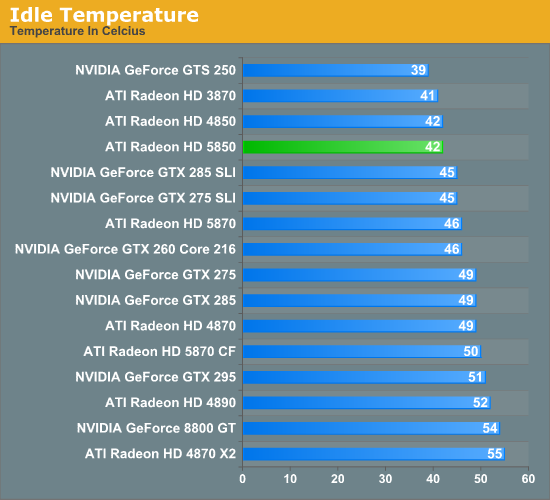 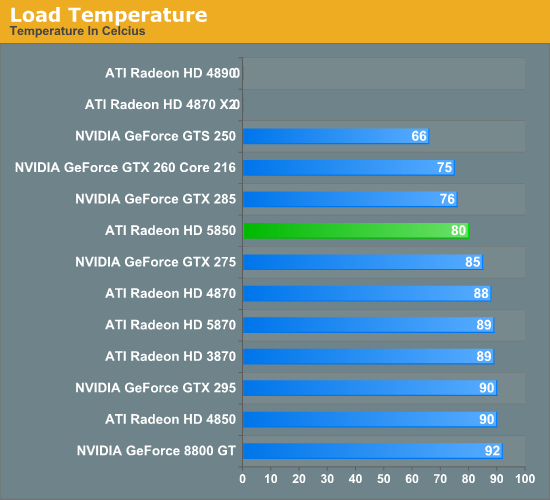 With lower power usage and a similar cooler, the 5850 is capable of keeping cooler than the 5870. While the 5870 approached 90C, the 5850 we’re testing was able to stay at 80C. This makes it the only AMD card we’ve tested that isn’t approaching 90C, which is good news for those of you with limited case ventilation. However it still loses to the GTS 250, and most of the GTX cards. We know NVIDIA is consuming more power, so clearly they have a more effective cooler in use if it’s able to cool their cards that well. 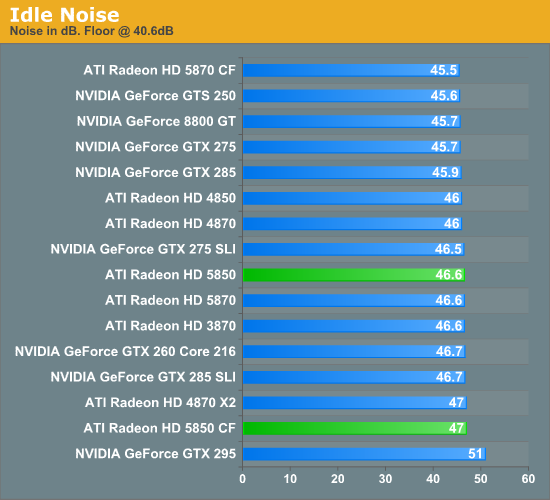 Finally we have noise. At idle virtually everything is the same, the 5850 and the 5870 come in at 46.6dB. To see a significant difference here, we would have to switch to a passively-cooled card. 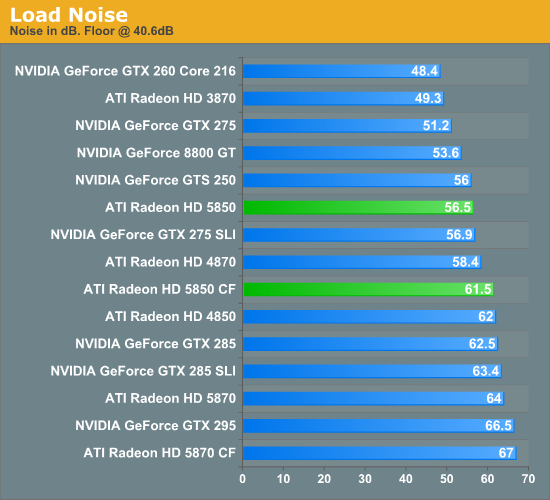 At load, the 5850 is just below the middle of the pack. Thankfully it’s not nearly as loud as the 5870, shaving off 8dB compared to its big brother and brings a Cypress-based card in to more reasonable territory. Adding a second card for Crossfire makes things louder at 61dB, but even that is still 6dB quieter than the 5870 CF.

This also shows us the tradeoffs NVIDIA made in cooling compared to AMD. The GTX 285, which was cooler running, is 6dB louder here as a result. Going by our charts the 5850 is fairly balanced in noise and temperature; it’s doesn’t need to make any trade-offs to achieve one or the other.