This is a big IDF, it's my first without Pat Gelsinger at Intel. We're unlikely to hear much about Pat's departure here, but the rumor mill appears active with everything from him being kicked out due to Larrabee's initial issues (unlikely) to him not being selected to be the next in line for CEO succession at Intel (much more likely). 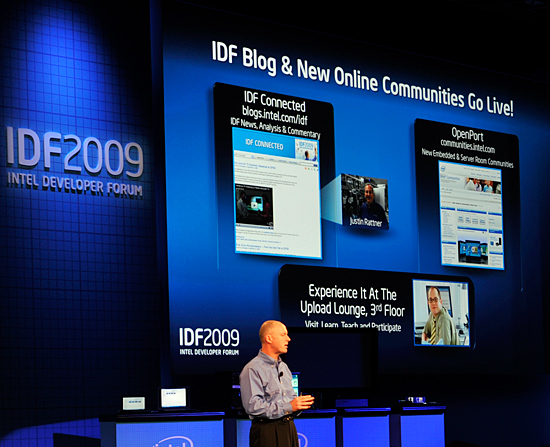 Sean Maloney, the heir to Otellini's throne at Intel - not Gelsinger

Regardless of what the motivations were, he will be sorely missed. Pat Gelsinger was the first person I met in this industry who truly blew me away with his knowledge. He has a rare combination of pure genius, passion and an incredible ability to convey even the most complicated concepts in a very easy to understand manner. He's been a tremendous influence on my own style of writing and knowledge, and for that I'll be forever grateful. Pat, you will be missed.

Otellini gave us a status update on Moore's Law. 32nm is healthy and we'll see the first products based on Westmere later this year: 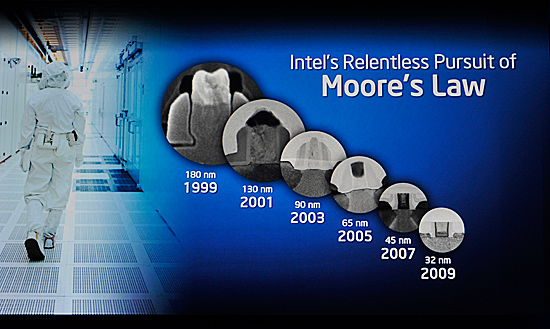 The move to 32nm will allow Intel to ship microprocessors with over 1 billion transistors into the consumer space. Sweet. 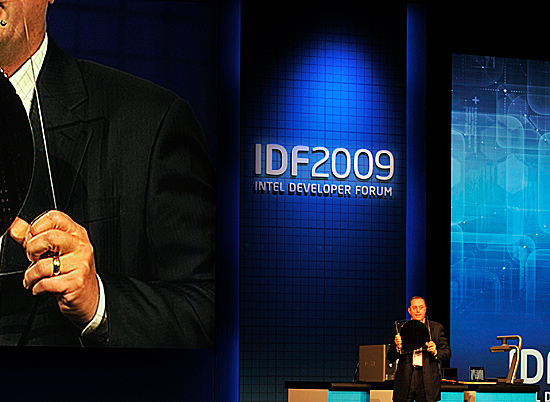 We also got the first look at Intel's 22nm SRAM test vehicle. The relevant details are as follows: 2.9 billion transistors per SRAM chip, each arey is 364Mb and production in CPUs in the second half of 2011.

Paul outlined the roadmap for the Atom processor and you'll notice that its progression looks a lot more like how Intel used to do things: 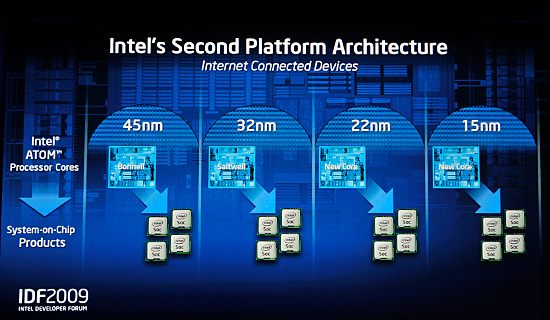 We'll get a brand new microarchitecture every "2 or so" years and transitions to smaller manufacturing processes on a regular basis.

Bonnell is the current 45nm core, Saltwell is the 32nm follow-up due out next year. 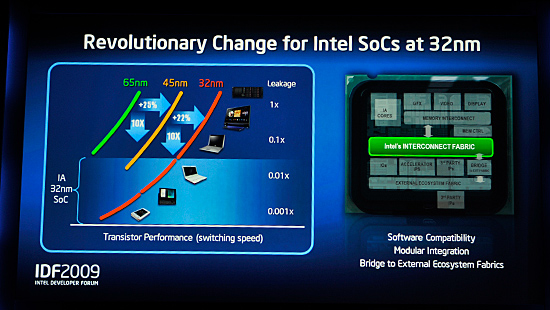 The move to smaller transistors ultimately has a different focus in the Atom space. While smaller manufacturing processes can be used to ramp clock speeds, in Atom the focus is going to be to reduce leakage current (and thus improve power efficiency/battery life). We'll see larger caches, more integration, but not necessarily higher clock speeds out of Atom in the future. Intel's goal here is to get Atom power consumption down to ARM levels.

First up was Arrandale, the upcoming dual-core 32nm Westmere derivative. We got a demo of an Arrandale notebook running full disk encryption accelerated by the CPU's hardware AES instructions. 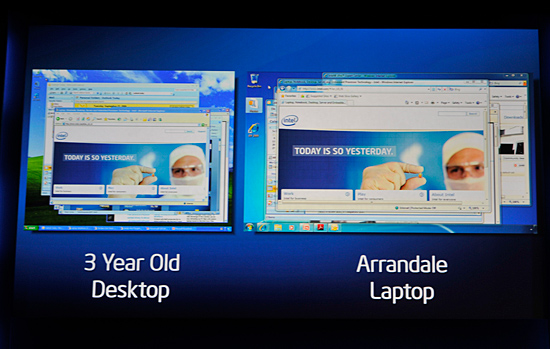 Sandy Bridge is the next major architecture shift due out in the second half of 2011. Built on 32nm, Sandy Bridge should be to Nehalem what Nehalem was to Conroe. It will also be the architecture that competes with AMD's long awaited Bulldozer cores. If all stays on track, 2011 should be very competitive in the high end CPU space. 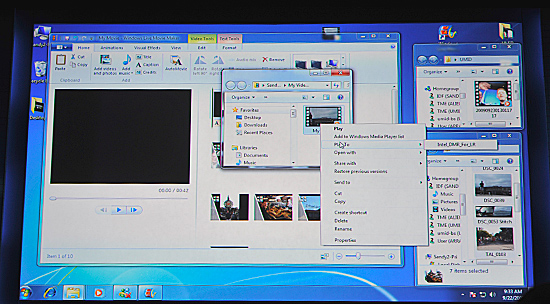 The program is a way of encouraging development for Atom based platforms (and potentially testing the waters of moving people off of ARM and to x86 in the ultra mobile space). 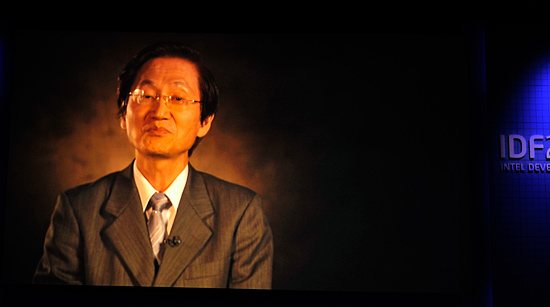 Moblin is a mobile optimized Linux distribution designed for notebooks, but next year we'll start seeing it on MIDs (again, one step away from getting Atom ready for the smartphone). 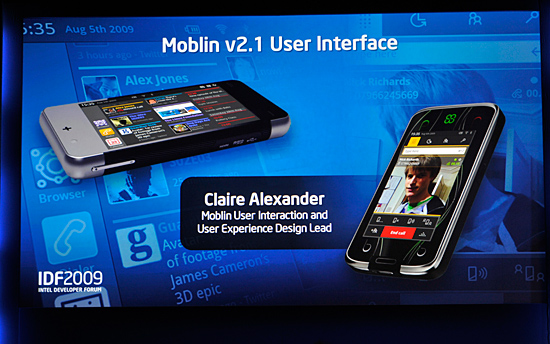 Intel did a quick demo of the Moblin 2.1 UI on a MID. The UI isn't particularly amazing by smartphone standards, but it's getting there. One more generation and I think we might have something that could really be used in a smartphone. 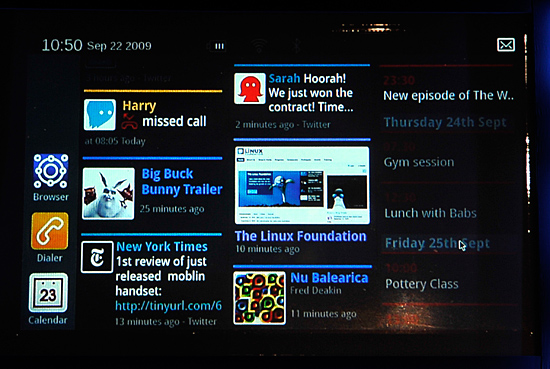 Intel's goal here is to bring the netbook usage experience to the MID. Honestly, that's been the biggest limitation to MID adoption in my mind: scaling down a desktop UI to a 5" screen just doesn't work well. A brand new touch UI is necessary for MIDs to be useful and Moblin delivers just that. 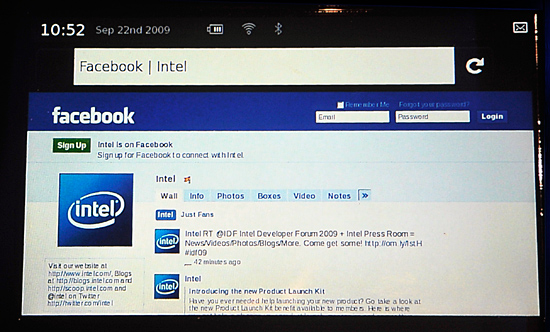 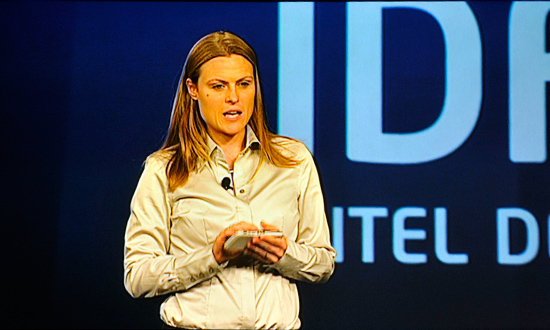 You can give Moblin a try on your netbook here.