DirectCompute, OpenCL, and the Future of CAL

As a journalist, GPGPU stuff is one of the more frustrating things to cover. The concept is great, but the execution makes it difficult to accurately cover, exacerbated by the fact that until now AMD and NVIDIA each had separate APIs. OpenCL and DirectCompute will unify things, but software will be slow to arrive.

As it stands, neither AMD nor NVIDIA have a complete OpenCL implementation that's shipping to end-users for Windows or Linux. NVIDIA has OpenCL working on the 8-series and later on Mac OS X Snow Leopard, and AMD has it working under the same OS for the 4800 series, but for obvious reasons we can’t test a 5870 in a Mac. As such it won’t be until later this year that we see either side get OpenCL up and running under Windows. Both NVIDIA and AMD have development versions that they're letting developers play with, and both have submitted implementations to Khronos, so hopefully we’ll have something soon.

It’s also worth noting that OpenCL is based around DirectX 10 hardware, so even after someone finally ships an implementation we’re likely to see a new version in short order. AMD is already talking about OpenCL 1.1, which would add support for the hardware features that they have from DirectX 11, such as append/consume buffers and atomic operations.

DirectCompute is in comparatively better shape. NVIDIA already supports it on their DX10 hardware, and the beta drivers we’re using for the 5870 support it on the 5000 series. The missing link at this point is AMD’s DX10 hardware; even the beta drivers we’re using don’t support it on the 2000, 3000, or 4000 series. From what we hear the final Catalyst 9.10 drivers will deliver this feature.

Given that DirectCompute is the only common GPGPU API that is currently working on both vendors’ cards, we wanted to try to use it as the basis of a proper GPGPU comparison. We did get something that would accomplish the task, unfortunately it was an NVIDIA tech demo. We have decided to run it anyhow as it’s quite literally the only thing we have right now that uses DirectCompute, but please take an appropriately sized quantity of salt – it’s not really a fair test. 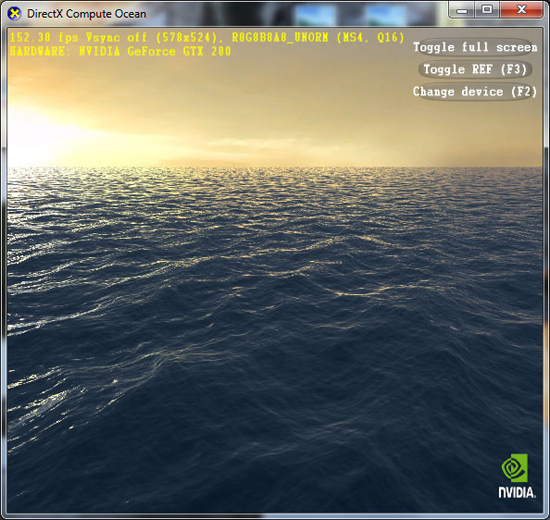 NVIDIA’s ocean demo is a fairly simple proof of concept program that uses DirectCompute to run Fast Fourier transforms directly on the GPU for better performance. The FFTs in turn are used to generate the wave data, forming the wave action seen on screen as part of the ocean. This is a DirectCompute 4.0 program, as it’s intended to run on NVIDIA’s DX10 hardware. 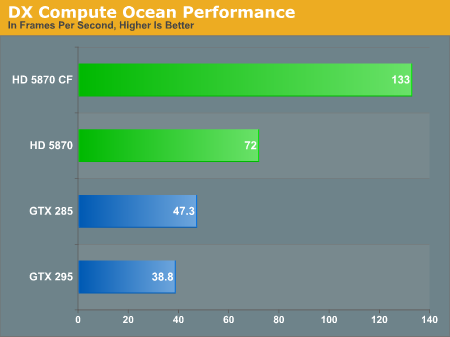 The 5870 has no problem running the program, and in spite of whatever home field advantage that may exist for NVIDIA it easily outperforms the GTX 285. Things get a little more crazy once we start using SLI/Crossfire; the 5870 picks up speed, but the GTX 295 ends up being slower than the GTX 285. As it’s only a tech demo this shouldn’t be dwelt on too much beyond the fact that it’s proof that DirectCompute is indeed working on the 5800 series.

Wrapping things up, one of the last GPGPU projects AMD presented at their press event was a GPU implementation of Bullet Physics, an open source physics simulation library. Although they’ll never admit it, AMD is probably getting tired of being beaten over the head by NVIDIA and PhysX; Bullet Physics is AMD’s proof that they can do physics too. However we don’t expect it to go anywhere given its very low penetration in existing games and the amount of trouble NVIDIA has had in getting developers to use anything besides Havok. Our expectations for GPGPU physics remains the same: the unification will come from a middleware vendor selling a commercial physics package. If it’s not Havok, then it will be someone else.

Finally, while AMD is hitting the ground running for OpenCL and DirectCompute, their older APIs are being left behind as AMD has chosen to focus all future efforts on OpenCL and DirectCompute. Brook+, AMD’s high level language, has been put out to pasture as a Sourceforge project. Compute Abstract Layer (CAL) lives on since it’s what AMD’s OpenCL support is built upon, however it’s not going to see any further public development with the interface frozen at the current 1.4 standard. AMD is discouraging any CAL development in favor of OpenCL, although it’s likely the High Performance Computing (HPC) crowd will continue to use it in conjunction with AMD’s FireStream cards to squeeze every bit of performance out of AMD’s hardware.