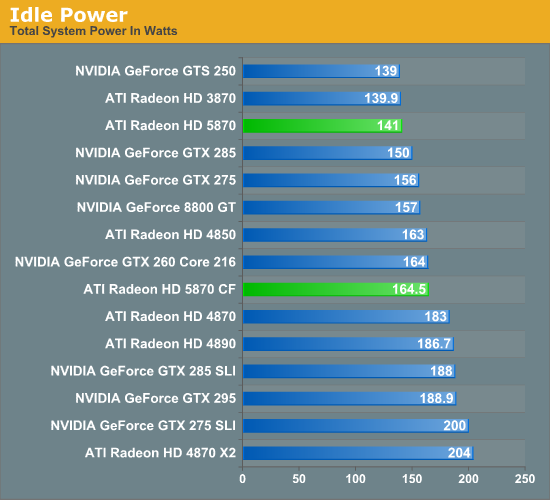 On our test bench, the idle power load of the system comes in at 141W, a good 42W lower than either the 4870 or 4890. The difference is even more pronounced when compared to the multi-GPU cards that the 5870 competes with performance wise, with the gap opening up to as much as 63W when compared to the 4870X2. In fact the only cards that the 5870 can’t beat are some of the slowest cards we have: the GTS 250 and the Radeon HD 3870.

As for the 5870 CF, we see AMD’s CF-specific power savings in play here. They told us they can get the second card down to 20W, and on our rig the power consumption of adding a second card is 23.5W, which after taking power inefficiencies into account is right on the dot.

Moving on to load power, we are using the latest version of the OCCT stress testing tool, as we have found that it creates the largest load out of any of the games and programs we have. As we stated in our look at Cypress’ power capabilities, OCCT is being actively throttled by AMD’s drivers on the 4000 and 3000 series hardware. So while this is the largest load we can generate on those cards, it’s not quite the largest load they could ever experience. For the 5000 series, any throttling would be done by the GPU’s own sensors, and only if the VRMs start to overload. 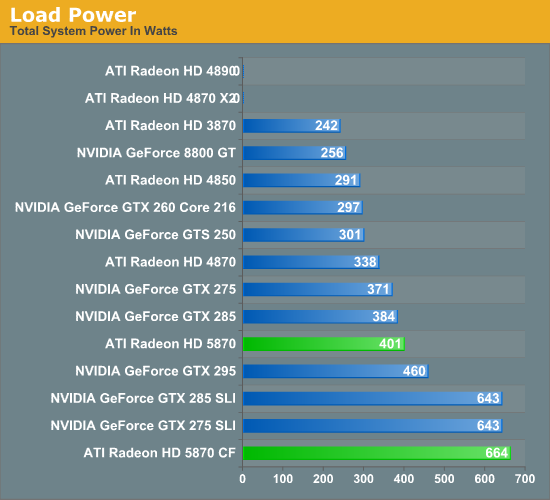 In spite of AMD’s throttling of the 4000 series, right off the bat we have two failures. Our 4870X2 and 4890 both crash the moment OCCT starts. If you ever wanted proof as to why AMD needed to move to hardware based overcurrent protection, you will get no better example of that than here.

For the cards that don’t fail the test, the 5870 ends up being the most power-hungry single-GPU card, at 401W total system power. This puts it slightly ahead of the GTX 285, and well, well behind any of the dual-GPU cards or configurations we are testing. Meanwhile the 5870 CF takes the cake, beating every other configuration for a load power of 664W. If we haven’t mentioned this already we will now: if you want to run multiple 5870s, you’re going to need a good power supply.

Ultimately with the throttling of OCCT it’s difficult to make accurate predictions about all possible cases. But from our tests with it, it looks like it’s fair to say that the 5870 has the capability to be a slightly bigger power hog than any previous single-GPU card.

In light of our results with OCCT, we have also taken load power results for our suite of cards when running World of Warcraft. As it’s not a stress-tester it should produce results more in line with what power consumption will look like with a regular game. 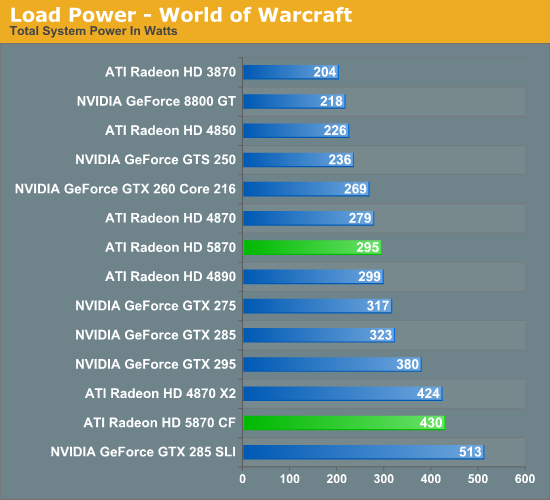 Right off the bat, system power consumption is significantly lower.  The biggest power hogs are the are the GTX 285 and GTX 285 SLI for single and dual-GPU configurations respectively. The bulk of the lineup is the same in terms of what cards consume more power, but the 5870 has moved down the ladder, coming in behind the GTX 275 and ahead of the 4870.

Next up we have card temperatures, measured using the on-board sensors of the card. With a good cooler, lower idle power consumption should lead to lower idle temperatures. 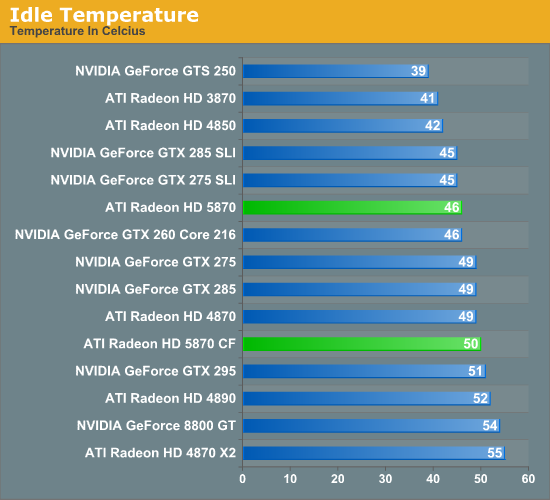 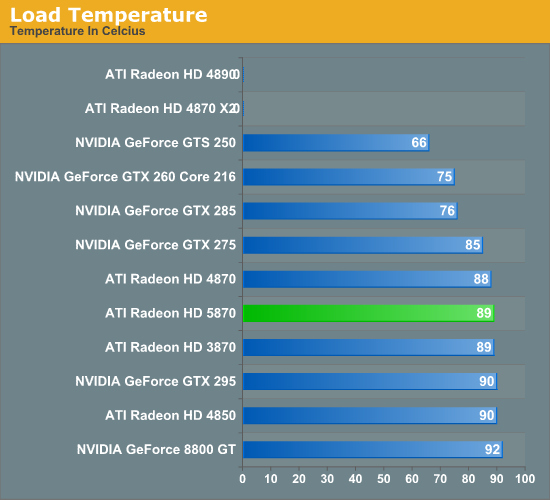 Unlike power consumption, load temperatures are all over the place. All of the AMD cards approach 90C, while NVIDIA’s cards are between 92C for an old 8800GT, and a relatively chilly 75C for the GTX 260. As far as the 5870 is concerned, this is solid proof that the half-slot exhaust vent isn’t going to cause any issues with cooling.

Finally we have fan noise, as measured 6” from the card. The noise floor for our setup is 40.4 dB. 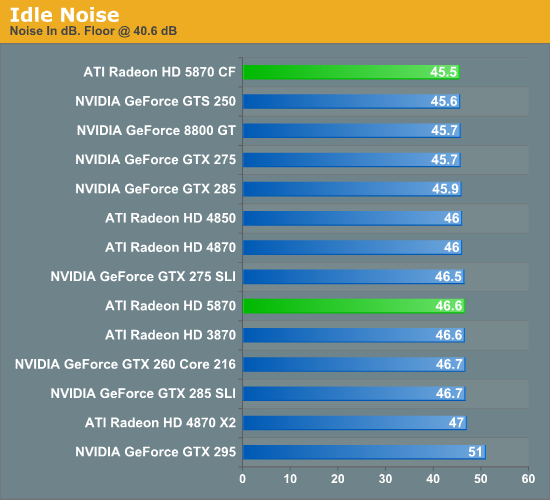 All of the cards, save the GTX 295, generate practically the same amount of noise when idling. Given the lower energy consumption of the 5870 when idling, we had been expecting it to end up a bit quieter, but this was not to be. 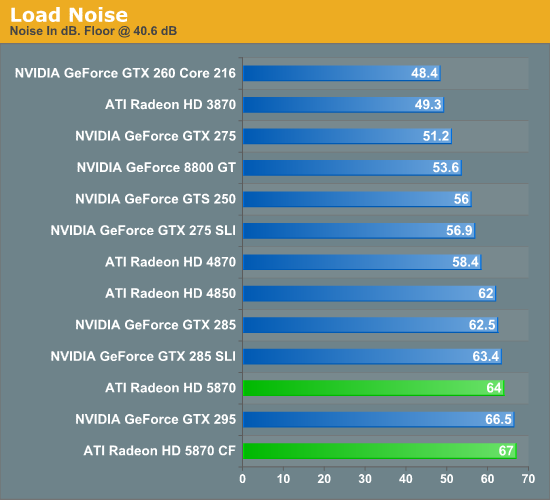 At load, the picture changes entirely. The more powerful the card the louder it tends to get, and the 5870 is no exception. At 64 dB it’s louder than everything other than the GTX 295 and a pair of 5870s. Hopefully this is something that the card manufacturers can improve on later on with custom coolers, as while 64 dB at 6" is not egregious it’s still an unwelcome increase in fan noise.