We'll start with AMD's mobile platform, which we have already dissected in previous reviews. Here's the quick rundown of specifications, and as much as possible we updated all applications, drivers, and OS components to the latest versions. The ATI drivers for Windows XP and Windows Vista are slightly older than the Windows 7 drivers, but unfortunately we are not able to install "reference drivers" on ATI-based laptops for Vista or XP. Thanks OEMs!


We are comparing performance and battery life on a single system, so system specifications don't necessarily matter. This is an apples-to-apples comparison between several different operating systems using the same hardware. Here are the results. 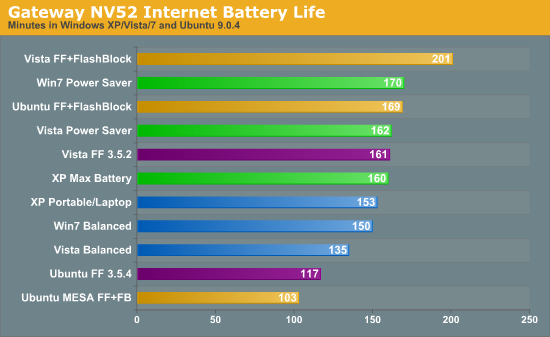 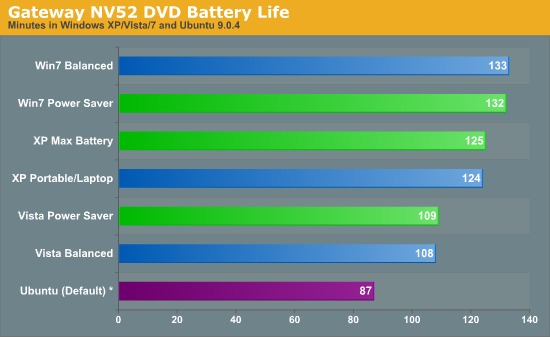 So we have some good news and some bad news. The good news is that Windows 7 definitely shows some battery life improvements relative to Windows Vista. The bad news? We're still awaiting the official launch of Windows 7… and then we need to start from scratch with battery life testing on future laptops, since as we don't want to compare apples and oranges.

Using the Balanced profile, Windows 7 ends up providing 11% more battery life than Windows Vista. When we switch to the Power Saver profile, the margin of victory shrinks to 5%. The wildcard in these tests is Windows XP, which delivered the best battery life using its Portable/Laptop profile (by 2% over Win7, so it's almost a tie). However, it also achieved the worst battery life using the Max Battery profile (Win7 wins by 6%).

The margin of error between runs is around 3%, but we try to run each test multiple times and take the best result… unfortunately, when you have one laptop and about 30 battery tests to run on it, each requiring around four hours (with recharge time), repeating each test is a bit too much to ask for. Case in point, the Gateway NV52 originally had a score of 175 minutes on one run with the Power Saver profile, which seemed too high; rerunning the test three times showed that there must have been some other factor involved (i.e. perhaps a Flash ad server was temporarily down). Feel free to take the figures with a grain of salt, and we have some additional data later to verify the standings.

Clearly, power profiles are making a big difference depending on the operating system. Windows XP saw the least benefit, improving just 4.5% by using the power saving profile. Windows 7 comes in second, with an improvement of 13%. Then we have Windows Vista, which delivers an astounding 20% improvement in battery life just by switching the power profile.

Ubuntu is a little bit more difficult to assess, but clearly Ubuntu doesn't come anywhere near matching Windows. Using the power saver profile and Firefox, Windows Vista beats Ubuntu by 38%. Even if we factor in the power profile (Ubuntu doesn't appear to have a way to manage power profiles like Windows), that would still be a difference of around 15% in favor of Vista. Flash is extremely sluggish on Linux, however, and the margin of victory decreases when we use the FlashBlock add-on. At that point, Windows Vista only wins by 19%, which we could attribute to the power profile. That's still a significant difference in battery life, and we're using the worst of the Windows OS options for comparison. We didn't have time to test with other operating systems using Firefox or FlashBlock, largely due to the amount of time we spent trying to get Ubuntu to work properly in the DVD playback results.

The DVD playback results are completely different from the Internet battery life results, with the power profile having virtually no effect on battery life. The three Windows versions had the same score, within one minute, using each profile, so using the Power Saver profile is clearly no panacea. On the other hand, there are definite differences between the three Windows OSes. Ubuntu crashed repeatedly during DVD playback, sometimes to the point where we needed a hard reboot. Changing to the open-source MESA drivers fixed the situation with DVD playback, but under that test scenario Ubuntu manages a rather unimpressive result. It looks like ATI's drivers would last just over two hours with Ubuntu in DVD playback, so they definitely do better in terms of power optimizations. Looking at the Internet battery life with the open-source MESA drivers, there's clearly a lack of power optimizations (despite enabling dynamic clocks in the xorg.conf file).

Overall, Windows 7 appears to improve battery life for DVD playback by over 20% relative to Windows Vista, but the improvement is only about 6% relative to Windows XP. The story for Internet surfing is far more confusing. If you use the Balanced power profile, Windows XP beats Windows Vista by 13% and just edges out Windows 7 by 2%, making it the best option. Turn to the Power Saver profile and Windows 7 is the leader, 6% ahead of XP and 5% ahead of Windows Vista. Ubuntu isn't even in the running, with Vista offering up to 37% more battery life using Firefox; blocking Flash elements does help Ubuntu, but it also helps Windows and the gap shrinks to only 19%. Makes you wonder if Flash content is actually worth having, doesn't it?