Lynnfield vs. Bloomfield: Overclocked and Without Turbo

The second request was how Lynnfield and Bloomfield stacked up with turbo disabled but when overclocked. At higher frequencies the demands on the memory subsystem go up so it's more than a valid concern.

I took both systems and overclocked them to 3.8GHz, a level that wasn't too difficult to achieve (more on this later): 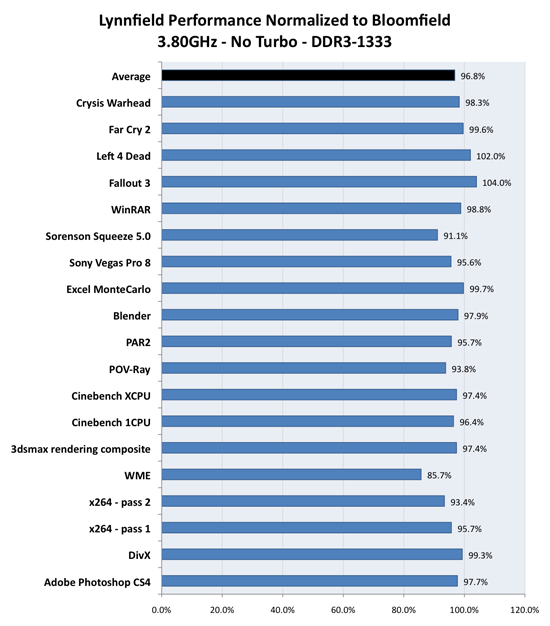 The average performance difference doesn't appear to change even as we scale up clock speed. Lynnfield actually does better here thanks to better than expected scores in the game tests (the on-die PCIe controller to blame?), but also falls behind in some other tests (e.g. x264). Overall the performance difference seems to hold even when overclocked; the performance you give up when going to Lynnfield at stock speeds with turbo disabled doesn't get any worse at overclocked speeds.

It's also worth noting that there are applications that we haven't tested that could demand even more of the memory subsystem, but on average, for most users I'd say that the third memory channel isn't worth the price difference.

Hitting 3.8GHz: The Good, The Bad and The Ugly

I picked 3.8GHz for the comparison on the previous page and I just wanted to share what I had to do to reach that frequency.

Bloomfield was by far the easiest to get up to 3.8GHz. I just increased the BCLK and the system POSTed at 3.8GHz. After going through several benchmarks I found that I needed to add a tiny bit of voltage (~40mV) to make it completely stable, but I really didn't have to do anything above and beyond that.

Lynnfield was a bit more difficult. After increasing the BCLK there was a lot more guess and test of voltage levels before I could get the system completely stable. As I mentioned in our Lynnfield launch article, thanks to the on-die PCIe controller any serious overclock will require a bit of voltage. I ended up running the chip at around 1.265V for full stability.

It was far easier to overclock Lynnfield if I just used voltages above 1.30V, but then I ran into another problem: heat. The chip wouldn't hit 3.8GHz regularly at such high voltages, although Gary's testing indicates that a bigger heatsink/fan could fix that. With some work you can definitely overclock Lynnfield using the retail heatsink/fan, it's just not nearly as easy as Bloomfield.

And finally we get to the Phenom II X4 965 BE. With Vista 32-bit installed, the Phenom II system had no problem running at 3.8GHz - however all of our application tests run under a 64-bit OS and this is the Phenom II's achilles' heel. Getting the system stable at 3.8GHz in a 64-bit OS was the most difficult out of the three overclocks I performed for this article. The chip required an uncomfortable amount of voltage and ultimately I couldn't get my sample 100% stable at 3.8GHz in 64-bit Vista (although 32-bit OSes weren't an issue).

If you're curious, the performance gap between AMD and Intel does widen considerably at these higher frequencies:

Guru3D pointed out an important observation in their Lynnfield review: power consumption goes up considerably when you overclock. It's not just the overclock, but it's the process of increasing core voltage that makes power consumption skyrocket. This is partly why I stress stock-voltage overclocking so much. Let me give you an example:

That's a pretty hefty gain in power consumption, over 18% but we get a 29.% increase in clock frequency. Remember my troubles getting the Phenom II X4 965 BE to work in 64-bit Windows? I ran some numbers to show exactly what a lot of extra voltage will do to power consumption:

Increasing the clock speed by 400MHz only drives up power consumption by 7%, boosting voltage on top of that results in an additional 25% power gain. When overclocking you always want to increase as much as possible while adding as little voltage as possible to maintain the most power efficient system.