The vast majority of our benchmarks are single task events that utilize anywhere from 23MB up to 1.4GB of memory space during the course of the benchmark. Obviously, this is not enough to fully stress test our 6GB or 8GB memory configurations. We devised a benchmark that would simulate a typical home workstation and consume as much of the 6GB/8GB as possible without crashing the machine.

We start by opening two instances of Internet Explorer 8.0 each with six tabs opened to flash intensive websites followed by Adobe Reader 9.1 with a rather large PDF document open, and iTunes 8 blaring the music selection of the day loudly. We then open two instances of Lightwave 3D 9.6 with our standard animation, Cinema 4D R11 with the benchmark scene, Microsoft Excel and Word 2007 with large documents, and finally Photoshop CS4 x64 with our test image. 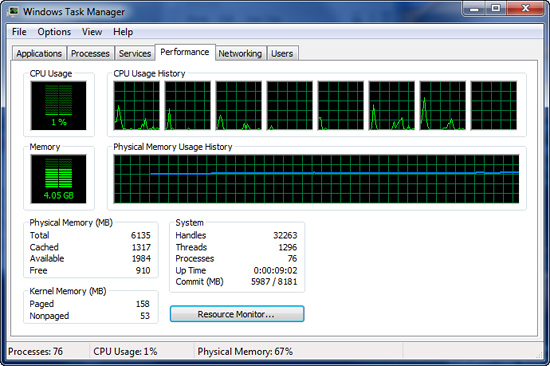 Before we start the benchmark process, our idle state memory usage is 4.05GB. Sa-weet! 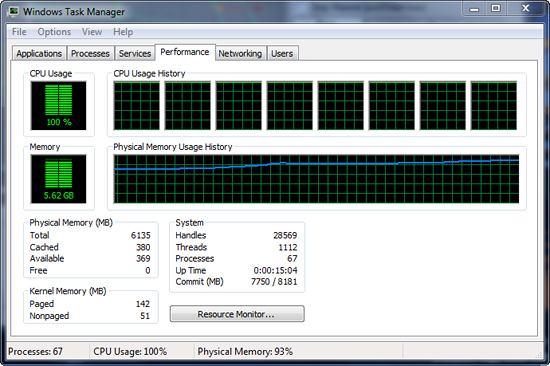 We wait two minutes for system activities to idle and then start playing Pinball Wizard via iTunes, start the render scene process in Cinema 4D R11, start a resize of our Photoshop image, and finally the render frame benchmark in Lightwave 3D. Our maximum memory usage during the benchmark is 5.62GB with 100% CPU utilization across all four or eight threads. 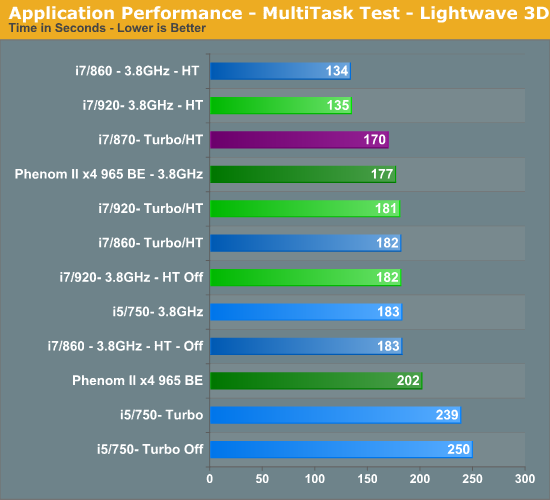 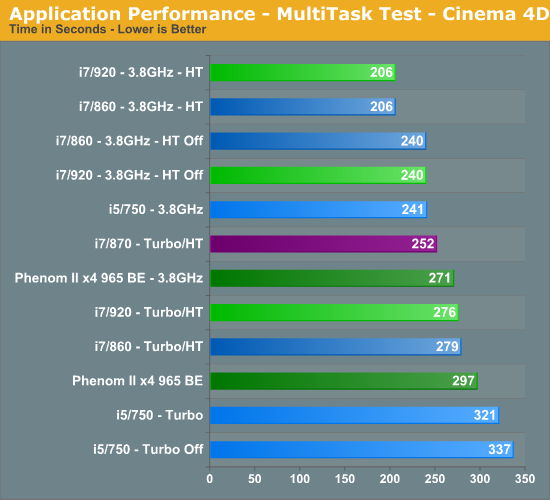 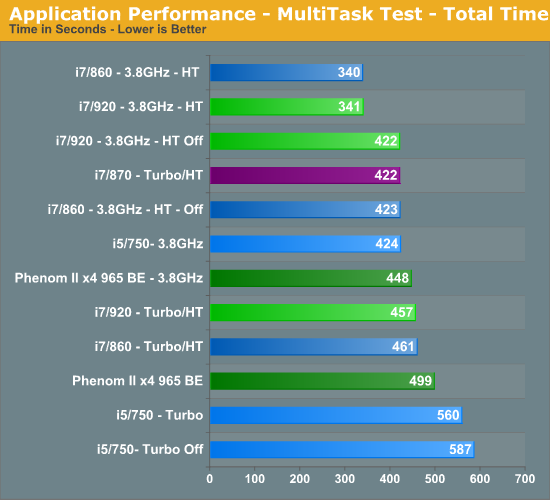 So far, our results have pretty much been a shampoo, rinse, and repeat event. I believe multitasking is what separates good systems from the not so good systems. I spend very little time using my system for gaming and when I do game, everything else is shutdown to maximize frame rates. Otherwise, I usually have a dozen or so browser windows open, music playing, several IM programs open and in use, Office apps, and various video/audio applications open in the background.

One or two of those primary applications are normally doing something simultaneously, especially when working. As such, I usually find this scenario to be one of the most demanding on a computer that is actually utilized for something besides trying to get a few benchmark sprints run before the LN2 pot goes dry.

The i5/750 results actually surprised me. The system never once felt “slow” but the results do not lie. The i5/750 had its head served on a platter at stock speeds, primarily due to the lack of Hyper-Threading when compared to the other choices. The 965 BE put up very respectable numbers and scaled linearly based on clock speed. An 11% increase in clock speed resulted in a 10% improvement in the total benchmark score for the 965 BE. You cannot ask for more than that.

At 3.8GHz clock speeds, it is once again a tossup between the 920 and 860 processors with HT enabled. The 920 did hold a slight advantage over the 860 at stock clock settings, attributable to slightly better data throughput when under load conditions. Otherwise, on the Intel side the i7/870 provided excellent results based on its aggressive turbo mode, although at a price.

We utilize the Ranch Small demo file along with the FarCry 2 benchmark utility. This particular demo offers a balance of both GPU and CPU performance. 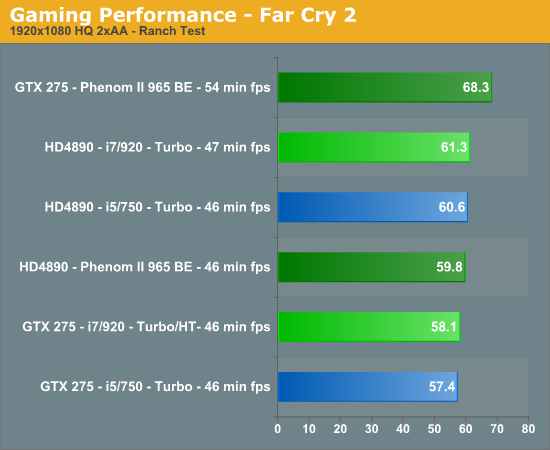 We utilize FRAPS to capture our results in a very repeatable section of the game and report the median score of our five benchmark runs. H.A.W.X. responds well to memory bandwidth improvements and scales linearly with CPU and GPU clock increases. 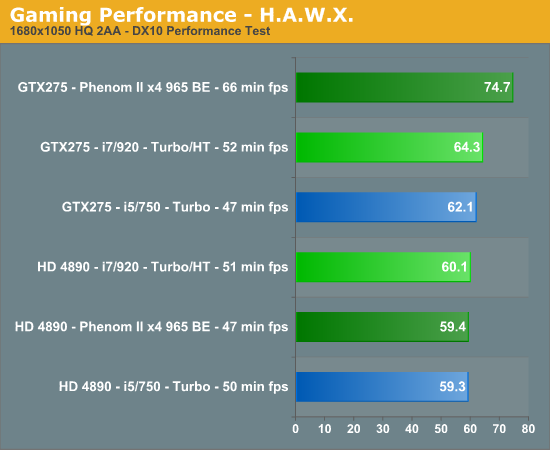 Your eyes are not deceiving you. After 100+ clean OS installs, countless video card, motherboard, memory and driver combinations, we have results that are not only repeatable, but appear to be valid. We also tracked in-game performance with FRAPS and had similar results. Put simply, unless we have something odd going on with driver optimizations, a BIOS bug, or a glitch in the OS, our NV cards perform better on the AMD platform than they do on the Intel platform. The pattern reverses itself when we utilize the AMD video cards.

It is items like this that make you lose hair and delay articles. Neither of which I can afford to have happen. However, we have several suppliers assisting us with the problem (if it is a problem) and hope to have an answer shortly. These results also repeat themselves in other games like H.A.W.X. and Left 4 Dead but not in Crysis Warhead or Dawn of War II. So, besides the gaming situation, we also see a similar pattern in AutoCad 2010 and other 3D rendering applications where GPU acceleration is utilized, it is just not as pronounced.