The first two laptops are representative of a large portion of the mobile market. Both processors are reasonably fast, you get 4GB RAM, and battery life is acceptable if not great. Discrete graphics would improve performance in gaming applications by a substantial amount, but it would also eat into the battery life, which is why most laptops utilize integrated graphics. Our last laptop for the browser battery life testing represents the last major chunk of the mobile market where battery life would matter: netbooks. The ASUS 1005HA represents the current state-of-the-art in netbooks, with an Intel Atom N280 processor, 1GB memory, a 160GB hard drive, and a 10.1" LCD. It uses the Intel 945GSE + ICH7MU chipset with integrated GMA 950 graphics.

Unlike our testing for the 1005HA review, we set the Super Hybrid Engine to "High" instead of "Auto", so the N280 won't underclock on battery. This reduces battery life by around 6%. Since the 1005HA runs XP instead of Vista, we also chose the "Portable/Laptop" power profile rather than the "Max Battery"; the reason is that the netbooks tend to run too slow when set to "Max Battery" and the gains aren't as substantial as with faster laptops. We measured a 7.5% increase in battery life by switching to the "Max Battery" profile, if you're interested. 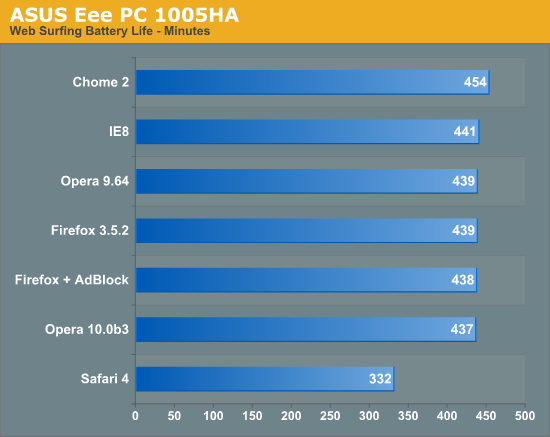 Unlike the other laptops, all of the browsers offer almost the same battery life on the 1005HA. Google Chrome comes in first this time, offering 2.5% more battery life than IE8. There's only a four minute gap between IE8 and Opera 10, a difference of less than 1% total. AdBlock doesn't help Firefox this time, most likely because of the amount of processing it takes to parse HTML and perform regular expression matching.

The gap between first and sixth with a netbook looks to be 3.5%, so if you're using a netbook you can select a browser based on other features, though Chrome does come in first by almost 15 minutes. The major exception is that Apple's Safari 4 web browser again comes in last, again by a large margin. Chrome managed 36% more battery life on the 1005HA than Safari, and Flash content within Safari 4 used a significant amount of CPU time. Safari seems to want more CPU power than the Atom can provide, with the result being the processor is often near 100% utilization for significant amounts of time on Flash-heavy sites.