This test writes 4KB in a completely random pattern over an 8GB space of the drive to simulate the sort of random writes that you'd see on an OS drive (even this is more stressful than a normal desktop user would see). I perform three concurrent IOs and run the test for 3 minutes. The results reported are in average MB/s over the entire time: 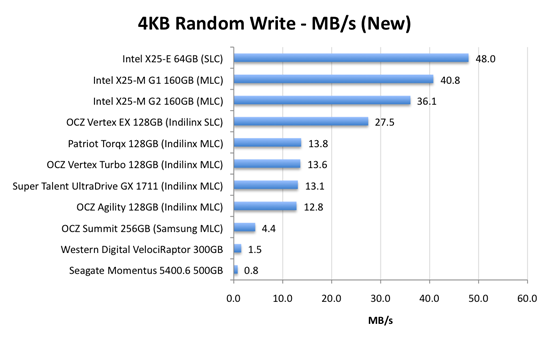 As we established in previous articles, the disk operations that feel the slowest are the random small file reads and writes. Both of which are easily handled by an SSD. A good friend of mine and former AnandTech Editor, Matthew Witheiler, asked me if he'd notice the performance improvement. I showed him the chart above.

He asked again if he'd notice. I said, emphatically, yes. 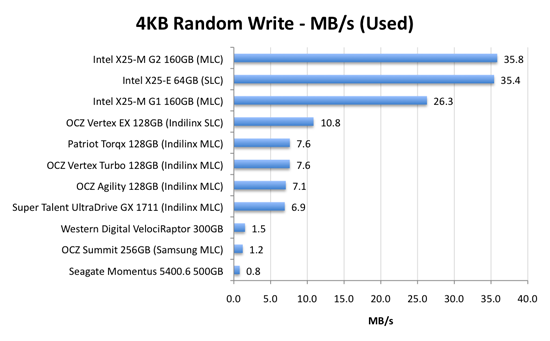 Now this is super interesting. Intel's X25-M G1 drops from 40.8MB/s when new down to 26.3MB/s in a well used state. Unfortunately for the G1, it will never get TRIM and will spend more time in the lower performance state over the life of the drive. But look at what happens with the X25-M G2: it drops from 36.1MB/s to 35.8MB/s - virtually no performance is lost. In fact, the G2 is so fast here that it outperforms the super expensive X25-E. Granted you don't get the lifespan of the X25-E and the SLC drive should perform better on more strenuous random write tests, but this is a major improvement.

The explanation? It actually boils down to the amount of memory on the drive. The X25-M G1 had 16MB of 166MHz SDRAM on-board, the G2 upped it to 32MB of slower 133MHz DRAM. Remember that Intel doesn't keep any user data in DRAM, it's only used for the remapping, defragmenting and tracking of all of the data being written to the drive. More DRAM means that the drive can now track more data, which means that even in the heaviest of random-write workloads you could toss at it on a normal desktop you will not actually lose any performance with the drive in a used state. And this is the drive Intel has decided to grant TRIM to.

The Indilinx drives do lose performance here. They drop from roughly 13MB/s down to 7MB/s. We're still talking ~5x the speed of a VelociRaptor, so there's no cause for alarm. But it's clear that even Indilinx's SLC drive can't match Intel's random write performance. And from what I hear, Intel's performance is only going to get better.

This is what the X25-M price premium gets you. 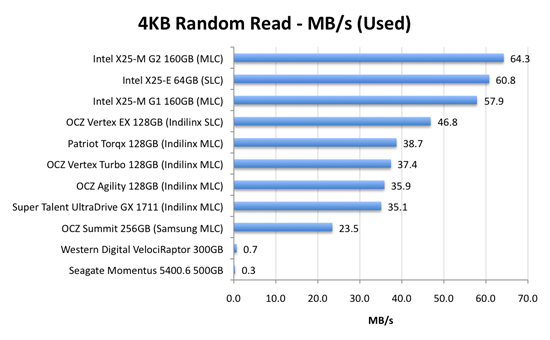 Bahahaha, look at the hard drive scores here: 0.7MB/s and 0.3MB/s? That's freakin' terrible! And that's why your system feels so slow when you start it up, there are a ton of concurrent random reads and writes happening all over the place which your hard drive crunches through at roughly 0.5MB/s. Even the Samsung based OCZ Summit manages a significant performance advantage here.

The Indilinx drives all cluster around the 30 - 40MB/s mark for random read performance, nothing to be ashamed of. The Intel drives kick it up a notch and give you roughly 60MB/s of random read performance. It's a noticeable improvement. As our application launch tests will show however, loading a single app on either an Indilinx or Intel drive will take about the same amount of time. It's only in the heavy multitasking and "seat of the pants" feel that you'll have a chance at feeling a difference.