The Phenom II X4 965 Black Edition impressed us when it launched earlier this week. Well, just about everything but the long-winded naming scheme and a slight concern about its power consumption under load conditions impressed us. Of course, the last minute change from a 125W TDP rating to a 140W TDP rating had us scratching our heads and those of the motherboard suppliers who will see a few less products certified for this processor.

That said, our first retail processor arrived in the labs yesterday. Of course, our first inclination was to test its overclocking capabilities and it reached the same 4.025GHz core speed the review sample managed on similar voltages. We did not expect any real miracles as the Phenom II tends to run out of steam around 4GHz when utilizing a 64-bit operating system. This particular chip did manage to hit 4.3GHz on 1.510V under Windows 7 x86, so it’s a keeper.

Our initial curiosity of the way, we decided to take a quick look at whether undervolting this gem of a processor could reduce its carbon footprint. After all, a stock 1.40V core voltage setting is a bit high for our tastes although an idle rate of 1.00V with Cool-n-Quiet (CnQ) enabled produced excellent results in earlier testing.  Of course, undervolting is not new and all current processors can handle a certain reduction in voltages.  We wanted to see just how low our first retail 965 BE could go before becoming unstable.  Our best 955 BE retail CPU hit 1.220V at a lower stock core speed of 3.2GHz and we thought this would be an attainable voltage target but at 3.4GHz considering the yield and process improvements made by AMD over the past few months. 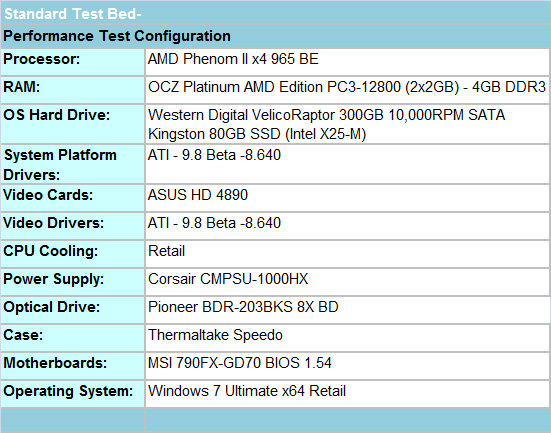 Our test bed is slightly different than the chipset launch article as we are utilizing the MSI 790FX-GD70 motherboard and an ASUS HD 4890 video card. The test results today are concentrated on undervolting this particular processor and not as a cross-platform comparison.

The power consumption tests utilize an watts up? Pro meter and we capture total power consumption for the system at the wall, less the monitor and speakers. Our faith in capturing true core temperatures with various software utilities for the Phenom II series is suspect at times based on the diode design and chipsets. Regardless if the reported temperatures are exactly true or not, the delta between settings is our primary focus today. We are using Everest 5.0.2.1810 to capture our individual core temperatures.

We let the system idle for 10 minutes before capturing the idle readings for both power and temperature. The CPU load test consists of us rendering a rather large scene in Maxon’s Cinema 4D R11 x64 while transcoding a MPEG4 file into a size friendly format for our iPOD with Mainconcept’s Reference 1.61 utility. This test ensures a 100% load on the processor from start to finish. We run FarCry 2 at 1680x1050 2xAA High Quality settings (very high on processing effects) to simulate a typical gaming session. 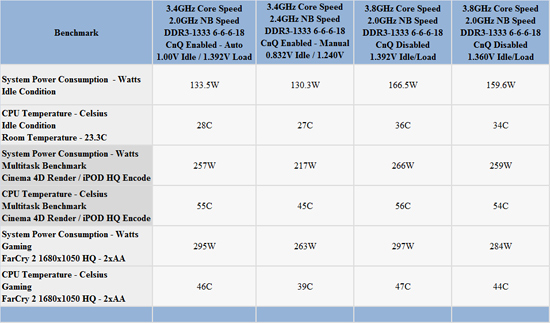 At a stock core speed of 3.4GHz, we were able to reduce the load core voltage from 1.392V to 1.240V and retain 100% stability with the system. The idle voltage with CnQ enabled dropped from 1.00V to 0.832V. At idle there is a slight difference in power consumption and temperatures, but nothing to get excited about yet.

We set the CPU multiplier to 19x for the overclock test which disables CnQ. Changing the HTT reference clock will allow CnQ to remain enabled and we are still running stability tests to determine core speed stability at reduced voltages. At this point, the highest stable setting on 1.36V is 17x218 for a 3.708GHz core clock with the NB at 2.4GHz, but we are still trying for 3.8GHz.

In the meantime, we set our multiplier to 19x with an HTT reference clock of 200, resulting in a 3.8GHz core clock. The lowest voltage we could set was 1.36V and retain stability in a wide variety of benchmarks. The CPU load test indicates a 3% reduction in power consumption and a 4% drop in temperatures. The game result is better with an earth friendly 5% reduction in power and temperatures dropping 7%.

Of course, your mileage will vary based on the quality of the processor, but our initial tests indicate there is an opportunity to reduce both power consumption and temperatures up to 16% and 19% respectively at stock settings by undervolting the 965 Black Edition processor. We have an additional retail processor arriving shortly and will provide a short update on the final test results at that time. For now, it appears this processor can be saved from the gas guzzler tax.