When doing the initial research for this article, one of my goals was to try to identify all of the reasons why I would want to use Ubuntu. While there are many reasons, a lot of them are what amount to edge cases. At the risk of being accused of shortchanging Ubuntu here, after using Ubuntu for quite some time the main reasons came down to this: It's free, and it's secure. That's it. Many of the popular Linux applications can be found for Windows, non-gaming performance largely isn't a concern on a high-end desktop such as mine, and no one is making any serious claims about ease of use when compared to Mac OS X. Ubuntu is free and Ubuntu is secure, but that's about it.

We'll start with “free”, since that's one of the fundamental subjects. When we say Ubuntu is free, there are two elements to that. The first is that Ubuntu costs nothing; it is free (gratis). The second is that Ubuntu's source code is open and can be modified by anyone; it is free (libre). This is expressed in the popular and simplified slogans of “free as in beer” and “free as in speech.” Many software products are freeware (e.g. Futuremark's PCMark) but fewer products are open source. The former does not necessitate the latter or vice versa, although practical considerations mean that most open source software is also freeware in some fashion since you can't keep people from compiling the source code for themselves.

There's fairly little to explain with respect to Ubuntu being freeware. It can be downloaded directly from the Ubuntu website in the form of an ISO disc image, and copied, installed, wiped as many times as anyone would like. Ubuntu's corporate sponsor/developer Canonical also sells it for a nominal price (currently it's listed on Amazon for $12) but there is no difference between the retail version and the download version. It's a free operating system, and free is a very good price.

Being free does mean giving up some things that would normally come with purchased software. Official support is the first element, as since it's a free OS there is no one being paid to support users. We'll dive into support in-depth in a bit, but for now it's enough to remember that Ubuntu does not come with official support. Support options are limited to the Ubuntu Knowledge Base, the forums, and whatever additional help can be found on the internet.

There's more to being able to offer Ubuntu for free than just not offering official support. Incidental expenses of assembling and distributing Ubuntu are covered by Canonical, who expects to eventually make a profit from Ubuntu through selling enterprise support. Development of Ubuntu and the underlying Linux components are done by a variety of volunteers working in their spare time, and paid employees from companies such as Novell, IBM, Red Hat, and others who use Linux in their commercial products and have a vested interest in its development.

However - and this is where we're going to take a bit of a detour - there is also the matter of who is not paid because Ubuntu is free. The United States patent system allows for ideas and methods to be patented, along with the more typical physical devices. What this means is that everything from encryption methods to video codecs to file systems can be and are patented by a variety of companies. As a result a lot of technologies in common use are patented, and those patents must be licensed for use when it comes to the United States (and many other countries with similar patent systems). Ubuntu includes software that uses patented material, but since Ubuntu is free, no one is paying those license fees.

Now I want to be very clear here that the reason I bring this up is because it's interesting, not because it's a problem. The chief example of where patents are an issue is media playback. MP3, MPEG-2, H.264, AAC, and other common formats have paid license requirements. This directly rears its head for the user when you first fire up Ubuntu's movie player and attempt to play a movie using a patented codec. Ubuntu goes through great lengths to point out that it needs to use a patented codec to play the material, and that unless the user has a valid license for the codecs it may be a patent violation to play the material, ultimately giving the user the option to download what Ubuntu calls the “restricted” codec set that is not distributed for legal reasons. 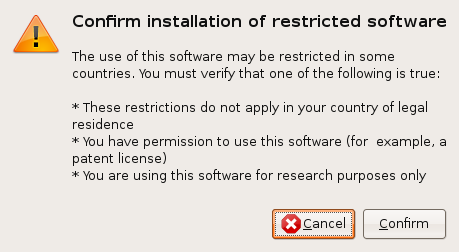 With that said, the legal issues are entirely theoretical for the end user. While using the restricted codecs is technically a patent violation, to our knowledge no individual has ever been sued or otherwise harassed over this, and we don't expect that to ever change. The licensing bodies like MPEG-LA are concerned with commercial products using their property – if someone is making money from their property, they want a piece of it. They are not concerned with home use of their codecs, and quite frankly users have nothing to be concerned about.

It should also be noted that Ubuntu (and other Linux distros) are not alone in this. VLC, Media Player Classic, various Windows codec packs, and many other free media players are also technically in violation of patent law for the same reasons. Even if someone is a Windows user, there's still a good chance they're violating patent law. For all practical purposes it's very hard to avoid being an IP violator, no matter the platform.

Meanwhile for those that absolutely must stay on the right side of the law, there are options, but it's not pretty. Canonical sells licensed software packages that can play back most media formats; Cyberlink's PowerDVD Linux for DVD playback, and Fluendo Complete Playback Pack for everything else. However the price may be shocking: being legit is going to cost you $50 for PowerDVD and another $40 for Fluendo. This makes a small but notable difference from Windows and Mac OS X. It's hard but not impossible to be both free and legitimate on those platforms through legal software that is given away for free – Winamp, Quicktime, DivX, and Flip4Mac all fall under this umbrella. Again, this makes no practical difference – no one who's holding a patent cares – but it's something any Ubuntu user trying to playback media is going to have to pay attention to for a fleeting moment.

Ultimately, the important bits to take away from this are that Ubuntu is free as in beer, and for the price you're only giving up official support. There are some patent issues, but since no one on either side actually cares, it doesn't matter. If nothing else, Ubuntu will be the best-priced operating system you will ever use, and price matters.