We’ll start our short look at Ubuntu’s performance with our CPU intensive benchmarks. Up first is SuperPi, a single-threaded pi-calculating benchmark. Here we time how long it takes to calculate Pi to 1 million digits. 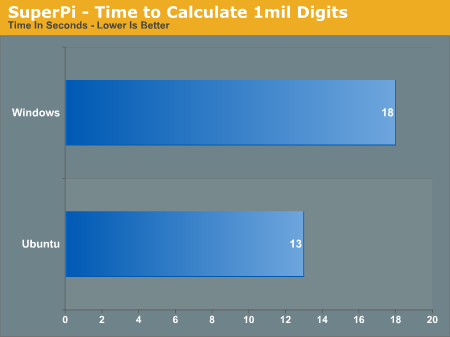 We ran this test several times more than usual just to make sure we weren’t seeing any kind of error. The Linux version of SuperPi really is about 30% faster than the Vista version. Keep this in mind, this will be an important point later. 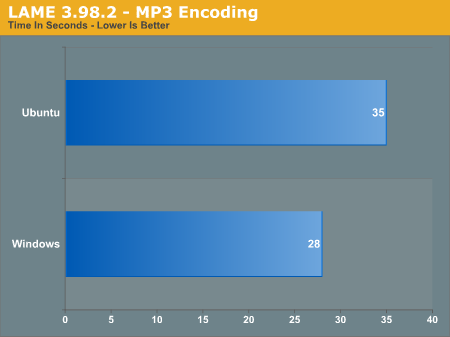 Meanwhile the situation for LAME is inverted. Vista outscores the Linux version by nearly 20%. 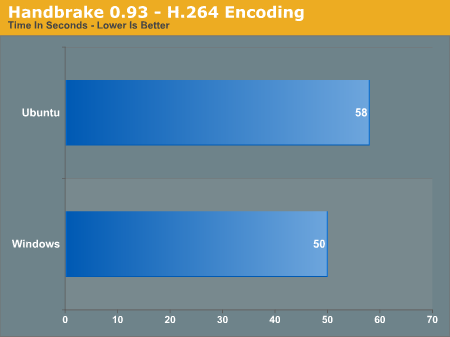 Using the cross-platform X264-based Handbreak for our video encoding test, Vista once again pulls ahead of Linux. 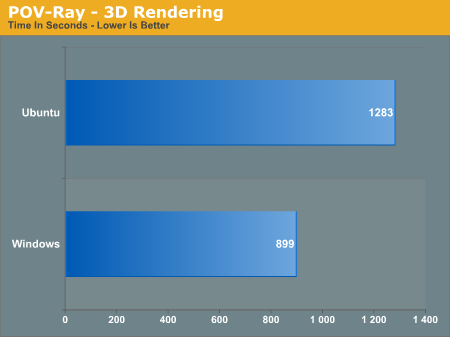 Once more Vista is ahead by a large margin.

From what we can tell, there’s little-if-any innate performance advantage to Vista or Linux in these benchmarks. Our working theory is that the performance difference comes down to the compiler used. Many Linux applications are compiled with GCC, while for Windows it’s either the Visual Studio compiler, or Intel’s own compiler (which is also available for Linux). There’s also a matter of compiler settings, as we saw in our quick breakout of Firefox benchmarks.

Meanwhile SuperPi uses a lot of hand-rolled code, although we’re still not sure why it’s outperforming Vista on Linux by as much as it is.

To shed a little more light on this idea of compiler performance, we have a few benchmarks of Windows application performance under Ubuntu through Wine. 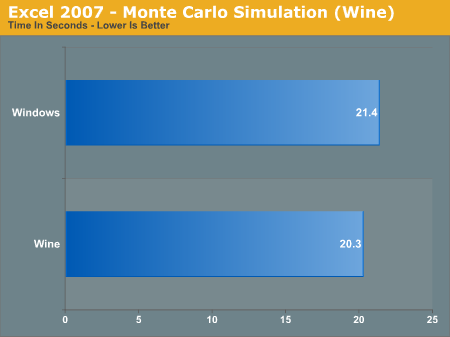 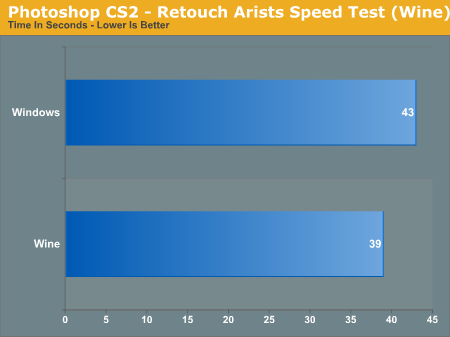 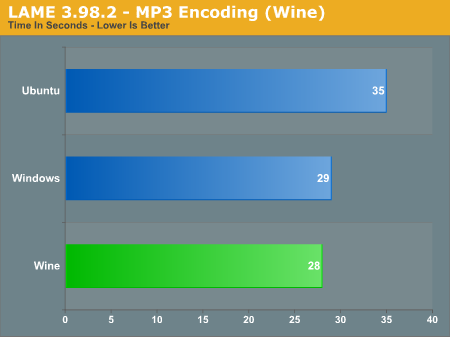 Here we see a most amazing thing: Ubuntu is outperforming Windows at running Windows applications! As we’ve removed the influence of compilers the Photoshop results are particularly interesting. From what we can tell it’s normally as fast under Linux as it is Vista, however there seems to be a short gap of low-CPU usage when running it under Vista that doesn’t occur when running it under Ubuntu. As a result Ubuntu finishes a few seconds earlier.

There are a number of conditional cases that mean that applications running under Wine don’t always match or beat Windows performance, but in our tests there’s no performance hit to using Wine to run Windows applications.

These results also lend a great deal of support to the idea that there’s a significant difference in performance between the two operating systems due to their compilers. This goes particularly for the LAME benchmark, where the performance gap melts away under Wine. This is something we’re going to have to look in to in the future.