The Card and Features

This card sports a 400MHz PowerPC processor with 128MB of RAM, essentially making the Killer Xeno Pro a computer on a x1 PCIe board. As with the first generation, the major feature of the Killer Xeno Pro is it's ability to offload TCP/IP work from the CPU by bypassing the Windows TCP/IP stack.

Microsoft's built-in TCP/IP stack requires the CPU to handle network packet processing. Additionally, when packets arrive, they don't generate interrupts and applications must poll for data (which also wastes time and resources). Bigfoot Networks claims that the windows networking stack is not designed for low latency operation while the Killer Xeno Pro is. Regardless of how (or how efficiently) a software network stack is implemented, having it run in hardware will reduce overhead and impact on the rest of the system. It should also be noted that, for applications which require the windows networking stack (like some VPN products), the Killer Xeno Pro can disable it's "game mode" and enable "application mode" which does disable TCP/IP offload and can increase compatibility in some cases.

Adding to this, the Killer Xeno Pro hardware is capable of offloading other network centric tasks like VoIP, firewalls, and networked storage (though these features are not all fully supported with appropriate software at this point in time). 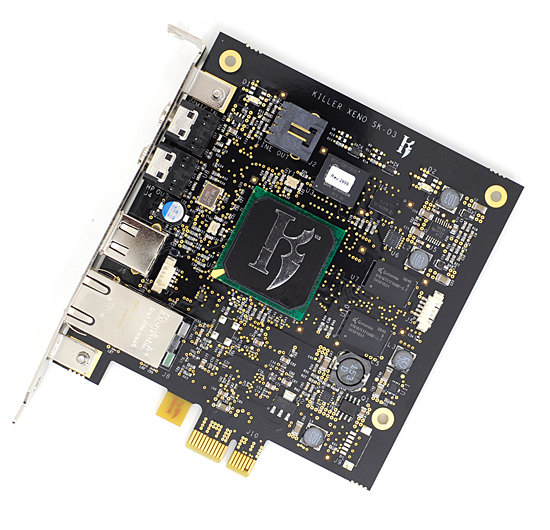 Installing the hardware is very straight forward, as it's just a simple PCIe card. If you want to use the voice chat features, the only additional need is to connect either the internal or external audio cable. No power is required, and other than that the network port is all that you'll need to worry about. Despite the fact that there is a USB port on the card, it is not used for anything at this point (but Bigfoot has indicated future potential to enable hardware managed USB attached storage).

Mic in and audio line out on a NIC; now that's a first.

The only installation issue we noted is that the driver install, when necessary, will also flash the Killer Xeno Pro hardware. There isn't very much warning about what's going to happen and no confirmation dialog before the start of the flash process. Those who click through install programs quickly without reading them might get themselves into a bit of trouble. There is no way to cancel the flash update once it's started, and while flashing hardware isn't as risky these days, it might be nice if the drivers were a little more clear about what was going to happen. 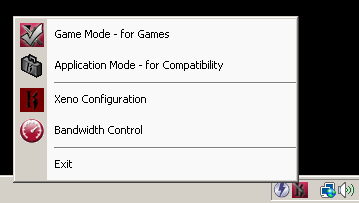 The hardware comes with drivers and a tray application that are capable of bandwidth throttling and prioritization. Control can be down to a per application basis and maximum download and upload speeds can be specified. Or for benefit without the headache, applications can be prioritized allowing hardware and usage patterns to determine effective bandwidth. Unfortunately, the drivers and applications for the Killer Xeno Pro only run on Microsoft Windows operating systems (XP and Vista flavors). With the gaming focus, this makes sense, but it would still be nice for those who like to dualboot Mac OS X or Linux. 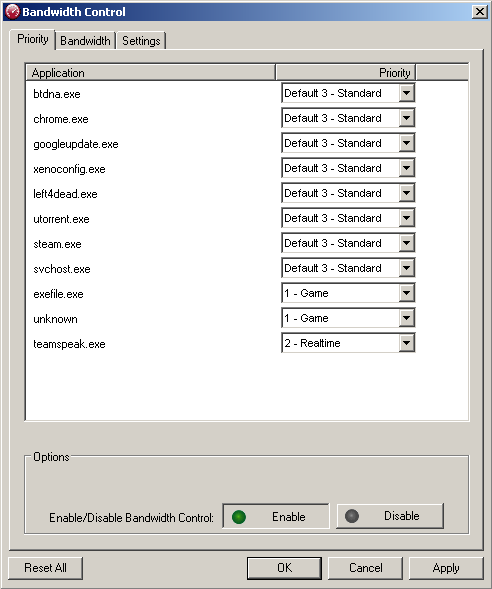 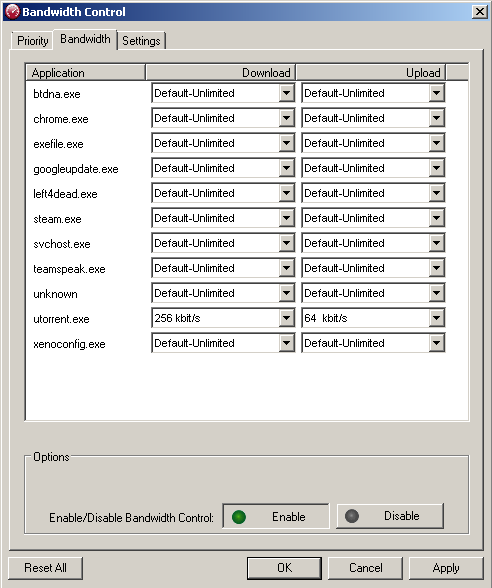 With software support, games and voice chat software can completely delegate any VoIP functionality to the Killer Xeno Pro which would handle taking input from the microphone (which plugs straight into the Killer Xeno Pro), compressing the data and sending it out over the network. When a voice packet is received by the Killer Xeno Pro, it decompresses it and sends it straight to the sound card (either via the soundcard's line-in port or an internal cable) bypassing the rest of the system completely. This should help reduce CPU overhead and voice lag caused by sources other than the network or server.

While this is great from a geeky technical standpoint, there isn't a huge amount of overhead on modern CPUs for voice chat software, and the network is by far the largest source of delay. So the actual benefit isn't going to be huge. These issues are the same with hardware firewall, bandwidth control, and all the extras.

The TCP/IP offload capability of the hardware will definitely remove another task from the CPU and operating system. This will free up resources that could be useful for other things, but the real world benefit of this will be very small in most games where the majority of the work is done on the GPU rather than the CPU. Having an NPU (network processing unit, as Bigfoot Networks likes to call it) that handles TCP/IP processing as soon as packets are received and uses hardware interrupts to let a game know that network packets have arrived (rather than requiring polling) can help decrease the latency between when a packet is received by the network card and when a game is able to make use of it, but as with the voice issue the largest delay is inherent in the internet itself and there is only so much benefit that can be had by optimizing the client side.

Not to say that optimizing client side networking is a bad thing: it certainly is not. The real question here is not whether the Killer Xeno Pro does something useful (because it does), the question is whether that useful thing has any significant impact on experience (and if that impact is high enough to justify the price).