Without increasing the core voltage on the 975, and using the retail cooler the highest stable overclock I was able to achieve was 3.73GHz: 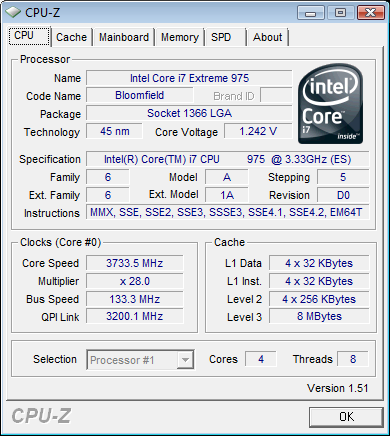 Boosting core voltage by 16% I was able to hit 4.13GHz with the retail air cooler, but I could not get the system fully stable at any higher frequencies: 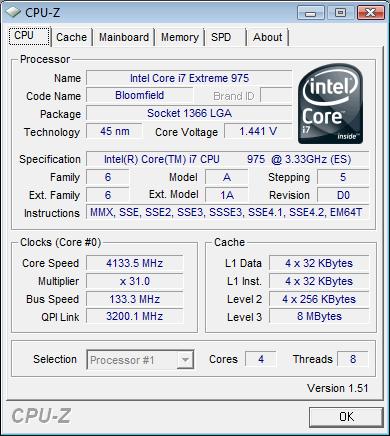 Gary was able to squeeze a 24/7 stable 4.4GHz out of his 975 on aftermarket air cooling with the EVGA X58 Classified and Gigabyte EX58-Extreme motherboards at 1.4V Core Vid, 1.375V VTT, 1.62V VDimm, and memory set to 7-8-7-20 at DDR3-1704 (new OCZ Blade PC17000). However, he admitted that if the retail Core i7-975 chips clock anything like the ES samples we were provided with that buying one would be a huge waste of money (actually his exact words were quite explicit but not printable). All of his retail D0 stepping Core i7-920 processors are easily hitting 4.4GHz~4.6GHz on high-end air coolers when installed in a variety of X58 motherboards. We have a retail Core i7-975 arriving later this week and will provide an update in the near future. As is always the case with overclocking: your mileage may vary. 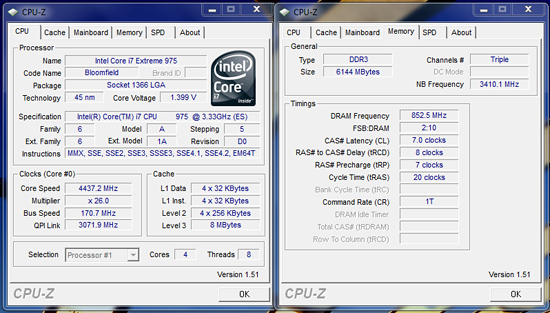 With relatively similar transistor counts, similar starting clock speeds, it's wonderful to see that AMD is able to offer virtually identical overclocking headroom to Intel's flagship Core i7 in a 64-bit operating system.