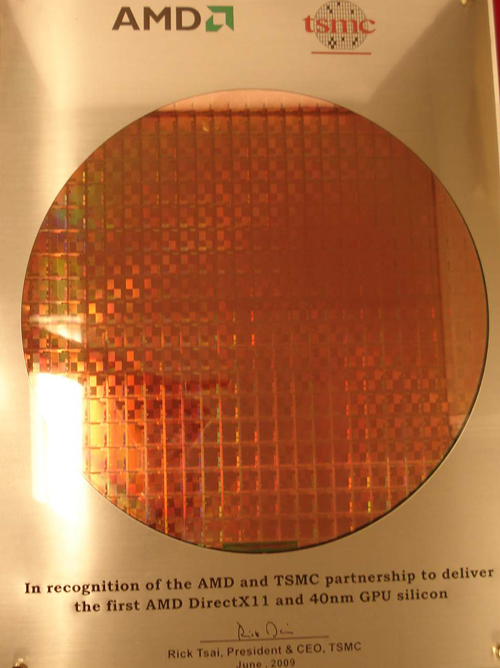 Evergreen is the codename for AMD's 40nm DX11 based product. With AMD's codename shift this time around, it is still a little ambiguous as to whether Evergreen is a GPU class or a specific configuration. While it is exciting that they're sharing what they are, AMD are still holding quite a few cards close to their chest. We know almost nothing about the details of the configuration, except that is is built on a 40nm process, is fully DX11 compliant, and that AMD put forth a slide titled "DirectX 11: sooner than you think."

Of course, sooner than I think would have to mean DirectX 11 would be here before Windows 7 launches (which is sort of impossible). We learned today that Microsoft has announced Windows 7 will be here on on shelves on October 22nd. From AMD's press release and slide deck, however, the only safe bet on when we'll see hardware is before the end of the year. But teasing us with "sooner than you think" would just be mean if we'll have to wait that long.

If AMD doesn't need to respin their silicon and Evergreen really is complete as of today (aside from qualification, tuning and ramping production), AMD really could be ready to ship product much sooner than November, getting product out along side or in advance of Windows 7. It all really depends on a bunch of things they aren't going to tell us. Of course that's just the way it is, but that doesn't make it any less frustrating not knowing.

We can ascertain from the wafer shot AMD provided us that there are about 19.5 dies vertically and 25.5 dies horizontally. As this is a 300mm wafer, we can sort of "guess" the dimensions of the chip at roughly 15.38mm x 11.76mm resulting in a die area of a little over 180mm^2. This is much smaller than the 55nm RV770 which is a 260mm^2 part, so if we expect a similar price target for the first Evergreen die that we saw with RV770, we could see a significant cost savings (and hopefully this tiny die will deliver a good general performance improvement as well).

Compare this die size to RV740 that weighs in at 137mm^2 and 826 million transistors, and we can estimate very loosely that Evergreen could come in at something over 1 billion transistors. Certainly the process has been tweaked since RV740 and Evergreen is a different architecture and layout, so scaling isn't exact or direct, but proportionally AMD should be able to fit that many transistors into only 180mm^2 on the 40nm process.

We'll definitely be interested in seeing how close our guesses are when we finally have hardware in hand. But this still doesn't speak to performance. Our only real reference for AMD's target is to guess that they will want to come in at near the same price point the RV770 hit at: the $200 - $300 range. With the added transistors, changes in architecture, and clock speed advantages with the 40nm process over 55nm, we could reasonably see AMD hitting that target.

Showing off Demos and Preliminary Thoughts

Unfortunately, we don't have any videos of the demos in action as presented at Computex. All we have to go on right now is a presentation from AMD with some slides showing stills from some demos. Here's a DX11 SDK sample showing sub-division surfaces using tessellation. 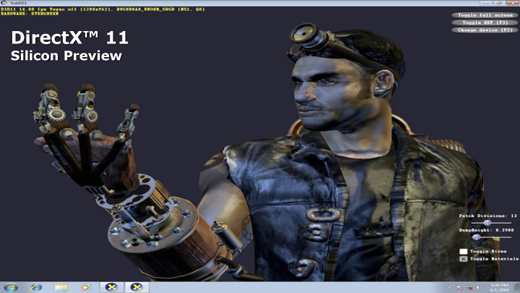 Since we don't have hardware that can run this demo as of yet, we can't really know how good 14 frames per second really is or what it means. We'll have to wait until we have competitive hardware to do any evaluation of performance (or we'll have to wait until AMD shows us something we can compare to current DX10 hardware running on Evergreen). Also shown were some other demos including transcoding and compute shader based AI. 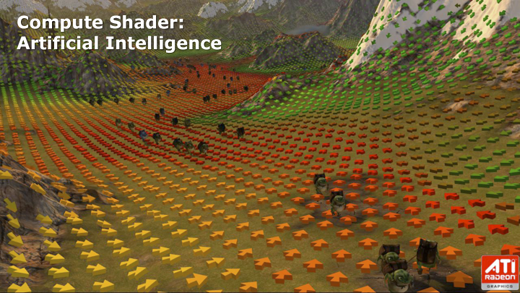 While there are a lot of applications that will be potentially enabled by the compute shader, it will certainly take some time for developers to get familiar and comfortable with treating the GPU like another processor for data-parallel compute operations. Our expectation is that DX11 (and preparation for the next round of console game systems) will serve as a catalyst for a final push away from DX9 based hardware and into the realm of real programmability.

While dynamic branching has been available since DX9, we haven't seen heavy use of it as it can be very resource intensive and slow even on modern hardware. Yes, it's much faster today, but there are still somethings that are not practical today despite the fact that some algorithms would significantly benefit from fast branching. We hope, and it seems AMD believes, that DX11 class hardware will continue the trend of speeding up and improving branching on GPUs. Here's a timeline showing ATIs GPU technology progression at a very high level. 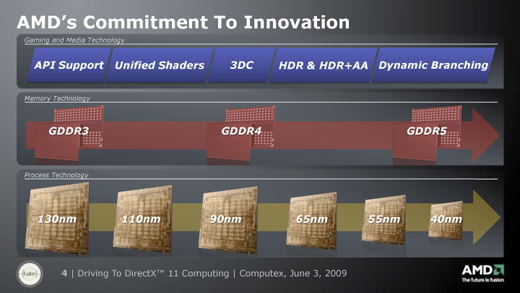 From the context of the presentation and what we've seen, AMD is really interested in pushing their tessellation technology. Tessellation has been an option since R600, but it hasn't been taken incredibly seriously because it wasn't a standard feature and couldn't run on all DX10 hardware. DirectX 11 changes that, and AMD is touting their experience as a benefit here. We'll have to wait and see what NVIDIA does, as experience doesn't always mean better.

So, the big deal today is that AMD is showing off working DX11 silicon on a 40nm process running DX11 demos. We expect DX11 before the end of the year based on what AMD has said. Now that we know when Windows 7 will hit (October 22nd) and that AMD already has Evergreen silicon in their hands, we are fairly hopeful that AMD could introduce their DX11 part ahead of Windows 7 if everything goes smoothly for them from now until then. Definitely cool stuff that really puts the pressure on NVIDIA to follow suit and start talking about their DX11 answer.