Putting It in Perspective: The Atom Takes on a Single-Core Pentium 4

When the Atom first appeared I immediately did my best to characterize its performance. Intel always referred to it as having the performance of a 90nm Pentium M but never really got as specific as I would like. In my subsequent testing I found that at 1.6GHz, Intel’s Atom performed like a 1.2GHz 90nm Pentium M (Dothan). If you had a Pentium M notebook back then, the comparison makes sense to you. If you didn’t, however, then you’d need another reference point.

I realized I had no idea how Atom compared to an old Pentium 4. To remedy the situation I dug up an old Dell based on a single-core, Northwood based (130nm) Pentium 4 running at 2.66GHz. These chips used a 533MHz FSB and had a 512KB on-die L2 cache. The system had an ATI Radeon X800 XT and 2GB of DDR memory. This Pentium 4 did not have Hyper-Threading, this was before HT made its official desktop debut.

For my first test I turned to Adobe Photoshop CS4: 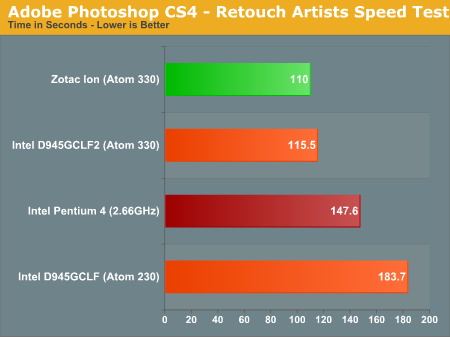 Next I wanted to look at video encoding performance, one of the Pentium 4’s strongpoints. If you remember back then, even the Athlon 64 had difficulty competing with the P4’s encoding prowess. We’ll start with Windows Media Encoder: 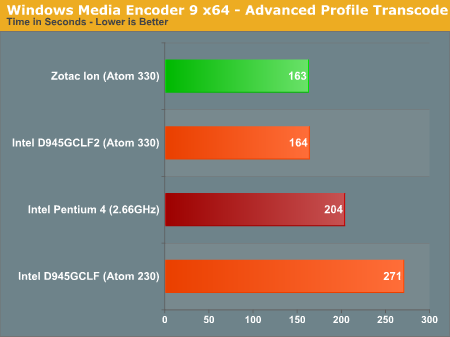 Again, the Atom 330 is faster than the Pentium 4 and again it’s due to the extra core. The Atom 230 is noticeably slower. 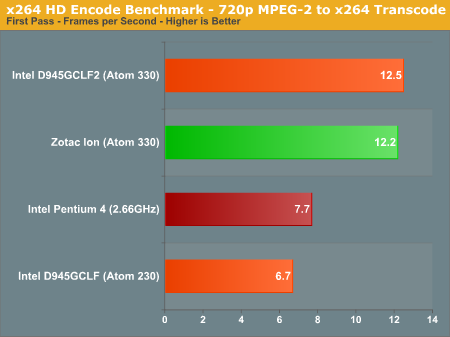 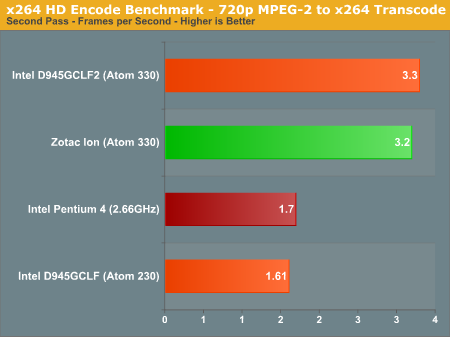 Next up was Cinebench. This is an interesting benchmark to look at because it offers both a single-threaded and multi-threaded benchmark. The Pentium 4 without Hyper-Threading can only execute a single thread, so the multi-threaded test can’t run. I’ve combined the meaningful results in a single chart: 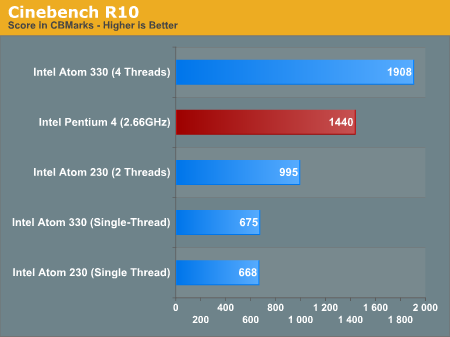 If we look at single-threaded performance, the Pentium 4 destroys the Atom - offering more than twice the performance of the svelte Atom core. Enable the multi-threaded render and the Atom 330 pulls ahead by 33%. This is the strength of the Atom; it’s clearly not faster than the Pentium 4 when working on a single thread, but exploit its ability to work on four threads simultaneously and it can actually be faster than a much larger, much more power hungry Pentium 4. This is a very important point to remember because despite losing to the Atom 330 in nearly all of the benchmarks, the Pentium 4 system it felt much faster than the Atom system in normal usage.

Simple things like opening up Control Panel or switching between windows felt faster on the old Pentium 4 system, which makes sense given that those tasks only spawn a single thread. In Cinebench we saw that the single-threaded performance of the old Pentium 4 was over twice as fast as the Atom - you tend to notice performance differences of that magnitude.

The final application test I ran was our WinRAR compression benchmark: 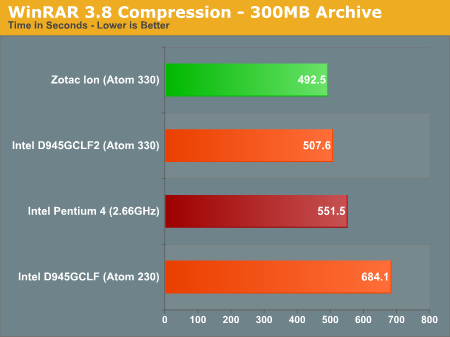 Once more, the Pentium 4 gets beat by the Atom 330 but turns the tables on the Atom 230. Even file compression is multi-threaded these days, and that is the Atom’s saving grace.

I wanted to know how well the GeForce 9300 could stand up against the old Dell’s Radeon X800 XT so I ran my WoW test on both systems. This is less of a CPU test and more of a CPU + GPU test obviously, but the results are interesting: 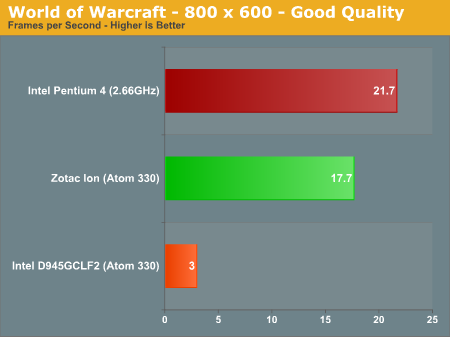 The Pentium 4 + X800 XT system is clearly faster, but not by as much as I expected. The advantage amounts to 22.5%, which is very noticeable, but close enough that if you had an even older system (or one with a lesser video card) you might not notice the performance difference between it and the Zotac Ion.

The last benchmark I ran comparing the Atom to a Pentium 4 was Futuremark’s Peacekeeper - a benchmark for measuring web browser performance. The benchmark is unaffected by internet connection and simply measures, once loaded, how fast your PC can work with various forms of commonly used javascript. I ran all of the Peacekeeper tests using Google Chrome: 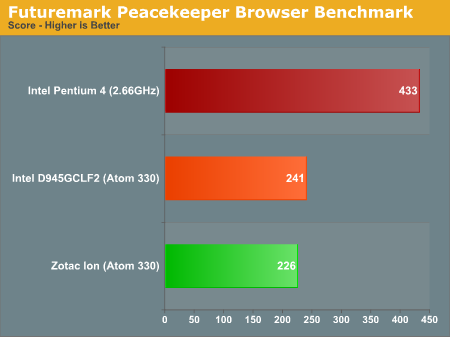 The Pentium 4 absolutely demolished the Atom here. Once again it’s almost twice as fast as the Atom 330. In a multi-threaded environment the Atom 330 can pull ahead, but in most typical day-to-day tasks the Pentium 4 is going to be a much faster solution.

Power efficiency is obviously where the Atom based Zotac Ion wins out. AMD and Intel both viewed the move to multiple cores as a performance and power efficiency win, and the results below help show that. Granted Atom is built on a 45nm process and we’re looking at a 130nm desktop Pentium 4 system, which is where much of the difference really comes from. But the results do show you that if you don’t need top bin performance you can build a very capable PC these days with significantly better power consumption characteristics. 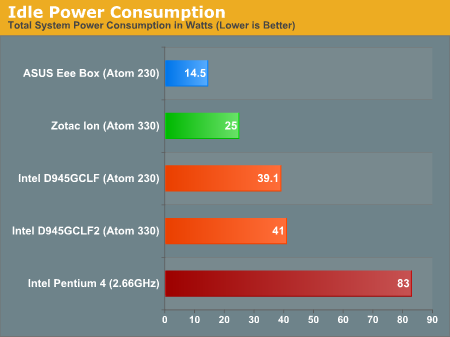 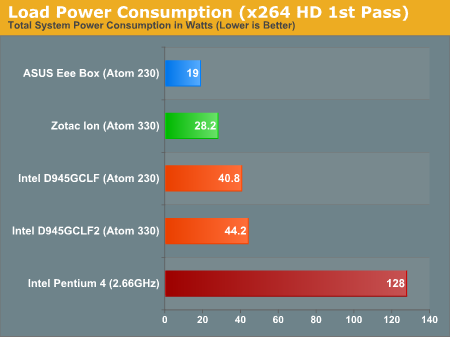 NVIDIA is forever arguing with me about how Atom and its Ion platform is a significant upgrade to PCs that are a few years old. My Pentium 4 results show that unfortunately, that’s not exactly the case. The Pentium 4 system I compared Zotac’s Ion to could never function as a modern-day HTPC and it won’t play Blu-ray discs. In those senses, Zotac’s Ion would be a tremendous upgrade. Even in multi-threaded CPU bound scenarios such as video encoding or 3D rendering, a dual-core Atom 330 is appreciably faster than the old Pentium 4 based Dell system. However, in normal web browsing and simply interacting with Windows, the Pentium 4 is significantly faster. The benchmarks show a nearly 2x performance advantage in single-threaded applications and I’d say they are accurately reflected in the usage experience.