Cranking GDDR5 All the Way Up

The first stop on our overclocking tour is in the memory subsystem. We will be increasing the memory clock frequency which reduces latency slightly and increases bandwidth significantly. The stock clock speed is 975MHz with 1ns devices (which means they are rated at 1GHz). AMD mentioned that signaling and interference (caused by the graphics hardware) are bigger problems with 1GHz GDDR5 than actually running the memory at that speed, which is why they went with the 25MHz lower clock speed.

Even with the 975MHz default clock speed, we already have a data rate of 3.9GHz. Which is pretty intense. We found in playing with ATI's built in overclocking tools (overdrive), we were able achieve stable performance at the maximum clock speed the driver allowed: 1200MHz. Doing the math gives us a massive 4.8GHz of data rate. This means, with a 256-bit wide bus, we're talking about almost 154 GB/s of bandwidth. This is more memory bandwidth than the NVIDIA GeForce GTX 280 and just a little less than the GTX 285 (which both use GDDR3 but on 512-bit busses).

So armed with 1.2GHz GDDR5, what can the 850MHz core of the Radeon HD 4890 accomplish now? Let's take a look at percent increase in performance per game when just increasing memory clock. 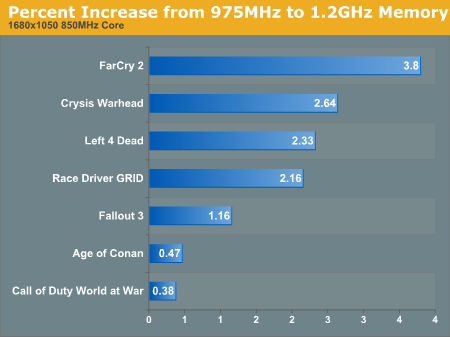 Because our tests are not 100% deterministic, there is some variability in our results. Generally, this is very low, though it does vary from game to game and benchmark to benchmark. We have a hard time calling anything less than a 3% difference significant, as it could be due to fluctuations in the tests. These numbers may indicate some positive change in performance, but not one that would matter. At 2560x1600, only Call of Duty showed a performance improvement that mattered. And this is from a 225MHz overclock (just about a 23.1% increase in clock speed), which is pretty large.

There really isn't a huge need to delve into the raw numbers here, as they are just not that different. We'll hold off on that until it matters. Next up, we're going to look at increasing only the core clock speed.