The oldest title in our test suite is still the most played. CoH has aged like fine wine and we still find it to be one of the best RTS games on the market. We look forward to the Tales of Valor standalone expansion in a couple of weeks. In the meantime, we crank all the options up to their highest settings, enable AA at 2x, and run the game under DX9. The DX10 patch offers some improved visuals but with a premium penalty in frame rates. We track a custom replay of Able Company’s assault at Omaha Beach with FRAPS and average three test runs for our results. 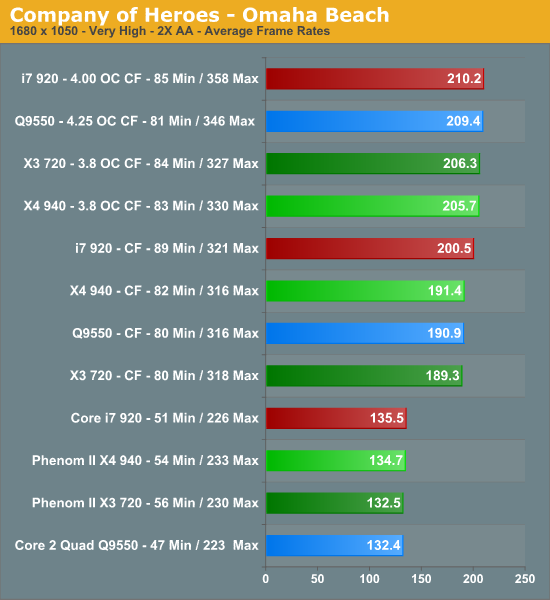 Single card scores at 1680x1050 are fairly close between each platform. In this particular game, the Phenom II X4 940 offers slight better performance than the X3 720BE in the single card and CrossFire results with a 1% advantage thanks to a higher clock speed. When overclocked the 720BE finishes ahead ever so slightly but within our margin of error on the benchmark.   Installing a second card for CrossFire operation improves average frame rates by 42% and minimum frame rates by 43% for the X3 720BE. Overclocking the 720BE resulted in a 9% improvement in average frame rates and 5% in minimum frame rates, indicating we are largely GPU limited at this point.

In our previous testing with the 8.12 drivers, the Intel systems would generate minimum frame rates in the 23~24fps range on a couple of runs and then jump to their current results or higher on the others. Guess what, we still noticed that problem with the 9.3 drivers. However, the hitch and pausing we encountered previously was mitigated somewhat in our new tests. It was only in intensive ground scenes with numerous units that we really noticed the problem and it was primarily with the Q9550 platform. Both Phenom II systems had extremely stable frame rates along with very fluid game play during the heavy action sequences. 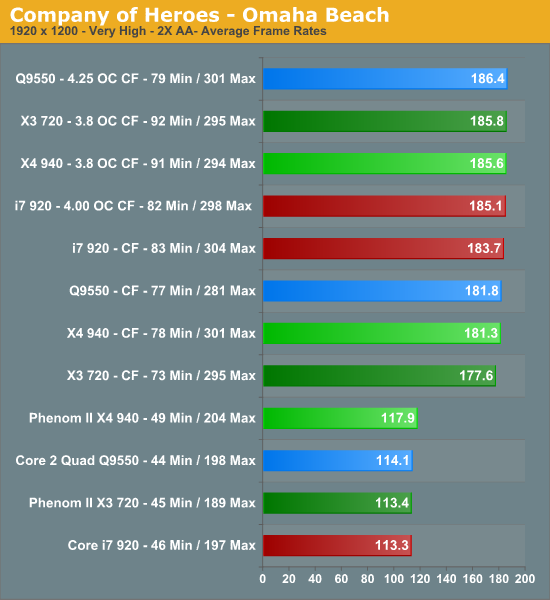 What about the game play experience? As we mentioned earlier, the Intel Q9550 platform had some problems with minimum frame rates throughout testing - not just in the benchmarks, but also during game play in various levels and online. The i7 platform would behave in the same manner at times, but the game play experience with it has certainly improved with the 9.3 driver set and BIOS upgrades. The problem is very likely driver related in some manner (as the man who helped to start DirectX once put it, "the drivers are always broken"), but nevertheless this continues to be a problem on the two Intel platforms.