Crysis Warhead is an update to the original game with a storyline that takes place on the other side of the Island during the same time-period as the first. The game features an enhanced and optimized version of the CryEngine 2 but is still a resource monster. We set the graphics options to Gamer, DX10, and 2xAA.  Our timedemo covers the Ambush level and we take an average score of three test runs. We have to admit at these settings that the game looks fantastic during action scenes and game play is very acceptable even though the frame rates are lower than our other games. 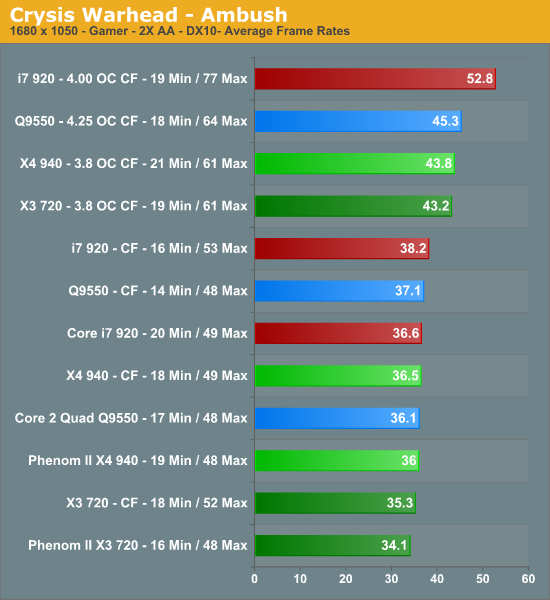 At 1680x1050, the 720BE slightly trails the other platforms in single card and CrossFire configurations. We also see why a single GPU card can be a better value than a dual GPU solution at this resolution. It is not until we overclock that we notice some separation between the platforms with the i7 taking a decent lead, but its minimum frame rates do not improve compared to a single card setup. However, our X4 940 setup offers the best minimum frame rates when overclocked and the 720BE ties the i7. 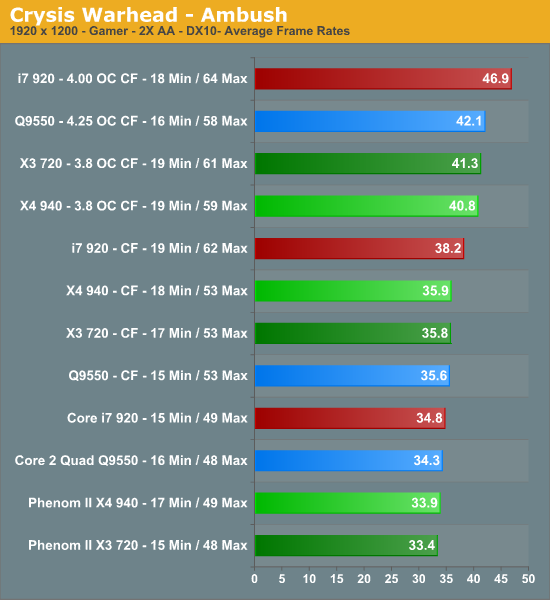 Our 1920x1200 test follows a similar performance pattern in single card and CrossFire testing.  Only this time the 720BE performs better as an additional load in placed on the GPU subsystem.  The 720BE trails the Q9550 by 3% in our overclock results although it is at a 12% clock speed disadvantage. We have noticed CryEngine 2 will respond to improved memory bandwidth and latencies as we clock up the processors, hence the performance of the i7 and to some degree the Phenom II. When overclocked, the two Phenom II CPUs hold the advantage in minimum frame rates, an important distinction in ensuring smooth game play in this title.

After playing through several levels on each platform, even with the improved performance of the Q9550 after switching to the 9.3 driver set, we thought the Phenom II 940/720BE offered a better overall gaming experience in this title.  Are we going to say those three words again?  Our therapist advised us not to hold our feelings in as they would eventually manifest and be channeled into a bad review for someone. So without further adieu, Smoother Game Play,  Smoother Game Play.

That feels better, but all joking aside, we simply experienced better player movement and weapon control during heavy action sequences with our Phenom II processors compared to the Q9550 platform. This was especially true if we were running background applications (IM, File Transfers, AntiVirus, etc.) and especially if CPU usage was over 90%, the Phenom II system never stuttered or gave us a slight pause between level transitions like the Q9550 (editor - Sounds like an SSD review).

It might not be noticeable to everyone and at first we thought it was a placebo effect, but doing a blind test with an A/B box always lead us to the Phenom II. The $64 question is if we had the same user experience with the i7 platform. The answer is yes. The i7 offered an improved game play experience over the Q9550 platform based on the same reasons we listed for the Phenom II. Simply put, integrated memory controller and CSI/HTT platform designs perform better than the previous front side bus platforms with these type of system loads.