Call of Duty: World at War

While not our favorite Call of Duty game, World at War certainly improves upon the graphics quality of previous versions. We play through the first few minutes of the Semper FI level by following a repeatable course and capture our performance results with FRAPS. We set the various graphics and texture options to their highest settings with AA at 2x and AF at 8x. 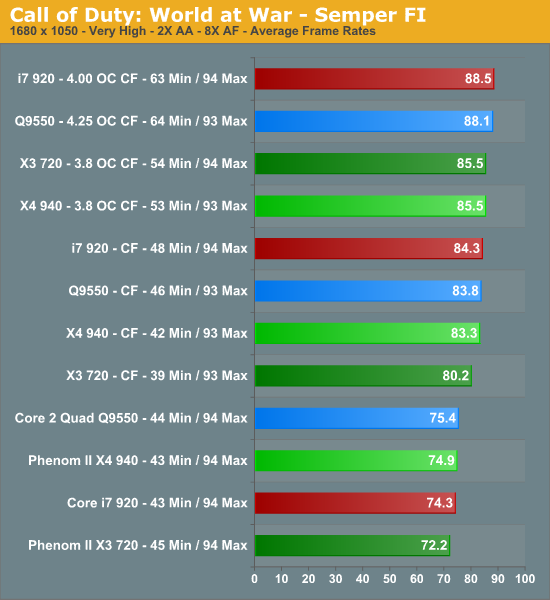 This game is not particularly hard on either the GPU or CPU, but we do hit a hard cap at 94fps. At 1680x1050 the Phenom II X3 720BE (henceforth, 720BE) is around 4% slower in average frame rates than the X4 940 in single card and CrossFire X mode due to a 200MHz clock speed advantage in this game. When overclocked, the 720BE equals the X4 940, although both trail the Intel platforms by 3% in average frame rates and 18% in minimum frame rates. 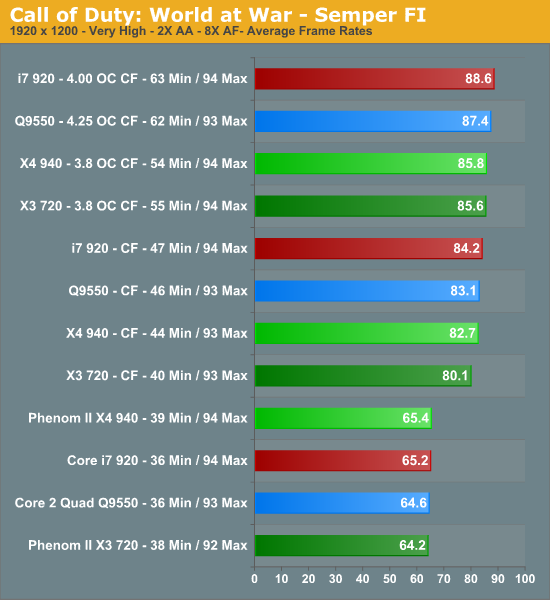 We have roughly the same performance results at 1920x1200 when comparing the platforms. The Phenom II X3 720BE is competitive with the Intel platforms and X4 940 in single card and CrossFire operation, though minimum frame rates in CrossFire mode trail the other solutions up to 17%. Once we overclock the CPUs, the minimum frame rate is about 15% lower on the Phenom II processors compared to the Intel products.

We did not notice any difference in game play quality at either resolution between the platforms after playing through several of the levels. Each platform offered a very smooth and fluid gaming experience. We thought the higher minimum frame rates on the Intel systems would be noticeable during the heavy action scenes in the jungle, but honestly, we could not tell the systems apart during testing.  The 720BE provided an equal gaming experience to the other processors with our settings.