Ryan said we’d lose some sequential write performance. The drive would no longer be capable of 230MB/s writes, perhaps only down to 80 or 90MB/s now. I told him it didn’t matter, that write latency needed to come down and if it were at the sacrifice of sequential throughput then it’d be fine. He asked me if I was sure, I said yes. I still didn’t think he could do it.

A couple days later and I got word that OCZ just got a new firmware revision back from Korea with the changes I’d asked for. They were going to do a quick test and if the results made me happy, they’d overnight a drive to me for Saturday delivery.

He sent me these iometer results:

The New Vertex was looking good, but was it too good to be true?

I couldn’t believe it. There was no way. “Sure”, I said, “send the drive over”. He asked if I’d be around on Saturday to receive it. I would be, I’m always around.

This was the drive I got: 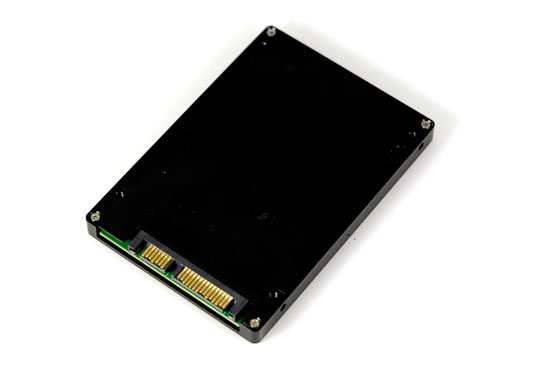 No markings, no label, no packaging - just a black box that supposedly fixed all of my problems. I ran the iometer test first...it passed. I ran PCMark. Performance improved. There’s no way this thing was fixed. I skipped all of the other tests and threw it in my machine, once again cloning my system drive. Not a single pause. Not a single stutter.

The drive felt slower than the Intel or Summit drives, but that was fine, it didn’t pause. My machine was usable. Slower is fine, invasive with regards to my user experience is not.

I took the Vertex back out and ran it through the full suite of tests. It worked. Look at the PCMark Vantage results to see just what re-focusing on small file random write latency did to the drive’s performance:

The Vertex went from performing like the OCZ Apex (dual JMicron JMF602B controllers) to performing more like an Intel X25-M or OCZ Summit. I’ll get to the full performance data later on in this article, but let’s just say that we finally have a more affordable SSD option. It’s not the fastest drive in the world, but it passes the test for giving you the benefits of a SSD without being worse in some way than a conventional hard drive.

As the Smoke Cleared, OCZ Won Me Over

Now let’s be very clear what happened here. OCZ took the feedback I gave them, and despite it resulting in a product with fewer marketable features implemented the changes. It’s a lot easier to say that your drive is capable of speeds of up to 230MB/s than it is to say it won’t stutter, the assumption is that it won’t stutter.

As far as I know, this is the one of the only reviews (if not the only) at the time of publication that’s using the new Vertex firmware. Everything else is based on the old firmware which did not make it to production. Keep that in mind if you’re looking to compare numbers or wondering why the drives behave differently across reviews. The old firmware never shipped thanks to OCZ's quick acting, so if you own one of these drives - you have a fixed version.

While I didn’t really see eye to eye with any of the SSD makers that got trashed in the X25-M review, OCZ was at least willing to listen. On top of that, OCZ was willing to take my feedback, go back to Indilinx and push for a different version of the firmware despite it resulting in a drive that may be harder to sell to the uninformed. The entire production of Vertex drives was held up until they ended up with a firmware revision that behaved as it should. It’s the sort of agility you can only have in a smaller company, but it’s a trait that OCZ chose to exercise.

They were the first to bring an Indilinx drive to the market, the first to produce a working drive based on Samsung’s latest controller, and the company that fixed the Indilinx firmware. I’ve upset companies in the past and while tempers flared after the X25-M review, OCZ at least made it clear this round that their desire is to produce the best drive they could. After the firmware was finalized, OCZ even admitted to me that they felt they had a much better drive; they weren’t just trying to please me, but they felt that their customers would be happier.

I should also point out that the firmware that OCZ pushed for will now be available to all other manufacturers building Indilinx based drives. It was a move that not only helped OCZ but could help every other manufacturer who ships a drive based on this controller.

None of this really matters when it comes to the drive itself, but I felt that the backstory was at least just as important as the benchmarks. Perhaps showing you all a different side of what goes on behind the scenes of one of these reviews.