That’s the amount that Intel is going to spend in the US alone on bringing up its 32nm manufacturing process in 2009 and 2010.

These are the fabs Intel is converting to 32nm: 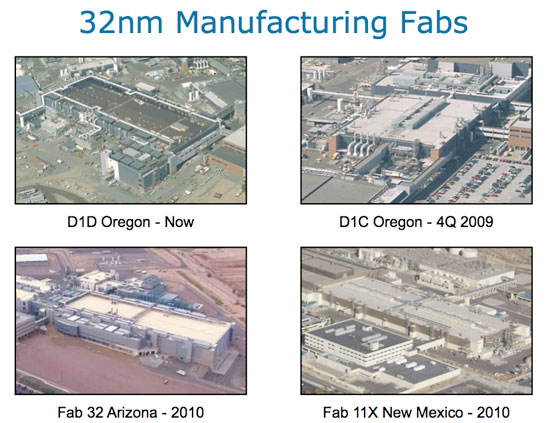 In Oregon Intel has the D1D fab which is already producing 32nm parts, and D1C which is scheduled to start 32nm production at the end of this year. Then two fabs in Arizona: Fab 32 and Fab 11X. Both of them come on line in 2010.

By the end of next year the total investment just to enable 32nm production in the US will be approximately eight billion dollars. In a time where all we hear about are bailouts, cutbacks and recession, this is welcome news.

If anything, Intel should have a renewed focus on competition given that its chief competitor finally woke up. That focus is there. The show must go on. 32nm will happen this year. Let’s talk about how.