Since all of the new AM3 parts are built off of the same Phenom II die as what we reviewed back in January, we'd expect similar overclocking results. While I worked on performance testing, Gary went to work on overclocking these new Socket-AM3 CPUs. What follows are his first experiences.

We are utilizing the ASUS M4A78T-E motherboard based on the AMD790FX/SB750 chipset for our overclocking tests, this is actually a Socket-AM3 motherboard. The Phenom II X4 810 and X3 720 BE processors are meant for the mid-range market and users are likely to pair them with the 790GX chipset or something similar. We will have additional overclocking results in the near future comparing various AM3 and AM2+ boards along with lower priced components. Our AM3 board selection currently includes the ASUS M4A79T Deluxe (790FX/SB750), ASUS M4A78T-E, and the ASRock M3A790GXH/128M,  which upholds their ability to provide high HTT rates for locked processors on the 790GX chipset. We expect additional AM3 boards from MSI, Gigabyte, and others shortly.

We put an emphasis on stability during our testing sessions so we test with real world applications ranging from a variety of games to digital imaging software to various audio/video creation programs, along with the normal OCCT and PCMark Vantage tests. We focus on the type of overclocks that support 24/7 operation with reasonable cooling and the ability to run a multitude of programs without a problem. We are not optimizing for SuperPI or 3DMark records; it's more like trying to keep our bank records safe from a crash (sadly, there's nothing we can do about actual banks crashing). 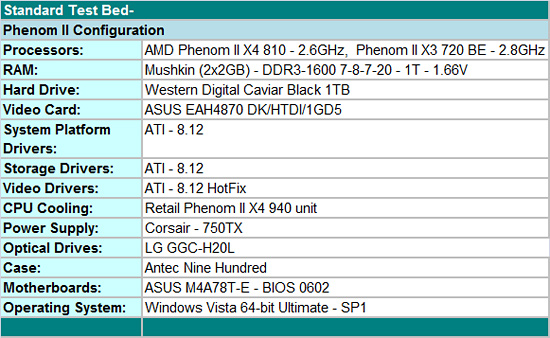 We selected the ASUS EAH4870 DK/HTDI/1GD5 video card for GPU duties. It is a non-reference design that offers improved thermals and acoustics over the standard HD4870 1GB cards in our board choices. The WD Caviar Black 1TB is the hard drive of choice for storage purposes. LG’s GGC-H20L Blu-ray drive fills in for optical duties. Our power supply is Corsair’s 750TX that we used in a couple of recent P45 and Phenom II CrossFire articles. The reason for this is to ensure similar power consumption numbers in our motherboard articles this year. However, in the IG centric motherboard tests we will show additional results with the Thermaltake TR2-430W power supply.

We selected Mushkin’s impressive DDR3-1600 kit to ensure our systems would not be limited by memory speed. We used 4GB in our standard benchmarks with memory set at DDR3-1600 with 7-8-7-18 timings at 1.66V. We will also test with some budget friendly DDR3-1333 from Patriot in the individual motherboard reviews. Our cooling choice is the retail unit from a Phenom II X4 940 as our engineering samples were not shipped with a heatsink/fan. Our clock speeds did not change with improved CPU air-cooling in today's test. However, temps did drop anywhere from 6C~9C at load with the Vigor Monsoon III LT we tested and would highly recommend utilizing an upgraded air cooler for the long term. We utilized Antec’s Nine Hundred case, yes, it is overkill for our uATX boards but we wanted to provide excellent cooling for our setups during overclocking for these particular tests. 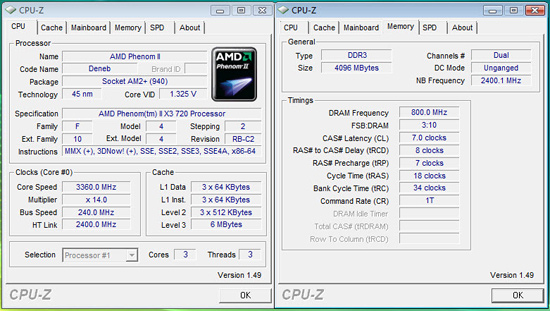 Our maximum overclock on stock Core VID with the X3 720 BE resulted in a 3.36GHz clock speed at a respectable 240HTT clock and Northbridge speed at 2400MHz. Memory speed is set to DDR3-1600 at 7-8-7-18 1T on 1.68V, slightly higher than our stock 1.66V for additional stability in Crysis Warhead. The primary voltages settings were left at auto in the BIOS with it determining a 1.3375V CPU/NB voltage. We tried a variety of CPU multipliers and HTT clock speed and still ended up around 3.3GHz as our maximum clock at the stock Core VID of 1.325V. 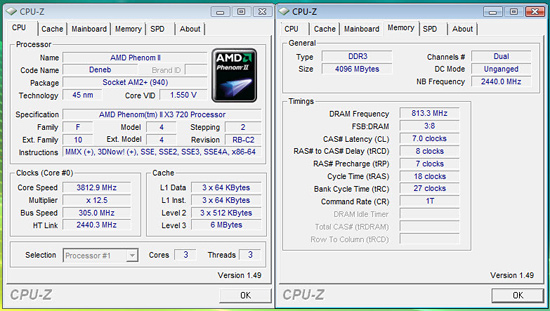 Our maximum overclock for both CPU and HTT speed ended up at a 12.5x305HTT setting. This resulted in a 3.812GHz processor clock speed with Northbridge speed at 2440MHz. We initially set our Northbridge speed to 2745MHz but could not hold stability in several of our benchmarks, regardless of voltage settings. We set Core VID to 1.55V, VDimm to 1.68V, CPU/NB Voltage to 1.4375V, and HT to 1.38V. Memory speed is set to DDR3-1627 at 7-8-7-18 1T. Our best performing and highest CPU/HTT setting was at 13x300 for a 3.90GHz core speed, but we could not hold stability in Crysis Warhead, Cyberlink Power Director 7, or the Movie/TV test in PCMark Vantage x64. 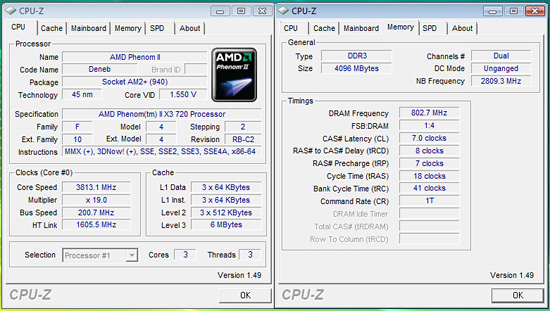 No surprises here based on our results above. Our maximum overclock for both CPU speed ended up at a 19x200HTT setting. This resulted in a 3.813GHz processor clock speed with Northbridge speed at 2809MHz. We set our Core VID to 1.55V, VDimm to 1.66V, CPU/NB Voltage to 1.4375V, and HT to 1.38V. on stock VCore with the X3 720 BE resulted in a 3.36GHz clock speed at a respectable 240HTT clock and Northbridge speed at 2400MHz. Memory speed is set to DDR3-1600 at 7-8-7-18 1T. We also tried the 19.5x200HTT setting for 3.90GHz, but could not hold stability in the applications mentioned above.  The system would post at 20x200 easily, but Vista 64 SP1 would always BSOD once entering the OS. It appears from all indications that the AM3 processors have the same 4GHz limitation in Vista 64 with normal cooling methods. We increased VCore to 1.60V and could POST at 4.2GHz but could never enter the OS regardless of other NB speed, HT speed, or voltage settings. 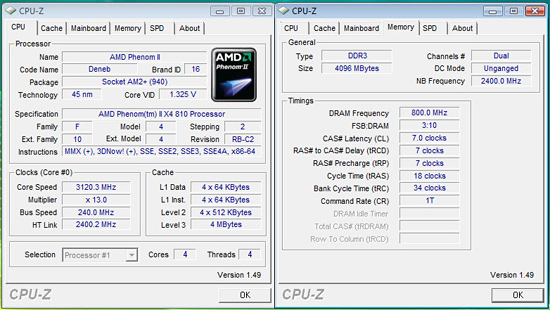 Our top overclock on stock VCore with the X4 810 resulted in a 3.12GHz clock speed at a healthy 240HTT clock and Northbridge speed at 2400MHz. Memory speed is set to DDR3-1600 at 7-7-7-18 1T on 1.66V. We left the primary voltages settings at auto in the BIOS with it determining a rather high 1.3750V CPU/NB voltage. We found through trial and error that a CPU/NB voltage of 1.3325 was stable at this clock speed. Since this CPU is locked, we could not increase the CPU multiplier but did try a variety of lower multipliers and higher HTT clock settings. However, on a stock Core VID and without greatly reducing memory speeds, our final 240HTT clock setting was the best we could accomplish. 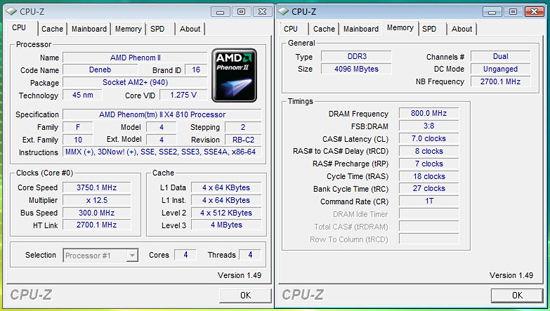 Our maximum overclock on the X4 810 ended with an offbeat 12.5x300HTT setting. This resulted in a 3.75GHz processor clock speed with Northbridge speed at 2700MHz. We tested a variety of combinations and this one resulted in our best CPU speed and overall system performance. We just could not go higher regardless of voltages or HT/Northbridge settings and keep the system stable. We almost had 13x295HTT stable at 3.83GHz but it would consistently fail most of our encoding benchmarks. We set Core VID to 1.55V, VDimm to 1.66V, CPU/NB Voltage to 1.4250V, and HT to 1.38V. One strange item we noticed is that our various reporting tools except TurboV from ASUS would show Core VID fluctuating wildly from 1.455V to 1.62V depending on the application. We checked with our DMM and voltage was at 1.571V on our 1.55V setting. Memory speed is set to DDR3-1600 at 7-8-7-18 1T. We also tossed in our new Corsair Dominator GT DDR3-2000 C7 kit for fun and had an easy time running 5-6-5-18 1T timings at DDR3-1600 with 1.62V on this board.