While PC/Consumer Electronics convergence has undeniably happened, CES is still a consumer electronics show. Our first press conference of the show was with ASUS talking about netbooks, but the next day was full of mostly TV makers discussing their 2009 lineups.

Generally the focus of most TV manufacturers at CES is to talk about how cool their TVs look and go rather light on the technology. This year, as we mentioned in our earlier coverage, we got more meat for our minute - we rarely heard about 100”+ TVs and instead got a real dose of technology. 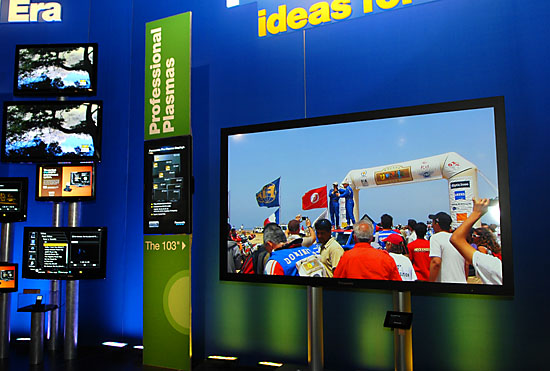 Large TVs were in Vegas this year, they just weren't the focus of the show. Photography by Laura Johnston.

So forgive me while I talk about a less PC, but very technology oriented element of this year’s CES: LCD TVs.

Wireless Inputs are In

I already mentioned that last year’s CES was very much a displays show. Nearly every manufacturer either had a focus on having the thinnest TVs or the largest screen size. As with most pissing contests, at the end of it you tend to feel a bit silly; so this year we saw less glam and more functional features.

Here’s the problem. LCD and Plasma TVs are dropping in prices. While that alone isn’t a problem, with more consumers purchasing them you have more people trying to wall mount their new flat screen TV. The issue with wall mounting is that most TVs are useless by themselves; you need an input source of some sort. Whether it’s a cable box, HTPC or Blu-ray player, getting your content to the TV usually means running cables from one or more boxes to your TV.

This tends to make wall mounting your brand new TV far messier. While the TV looks like a part of the room, the sources dangling from it don’t. Last year a couple of companies showed TVs with wireless inputs. There’s a separate box that communicates wirelessly to the TV, and you plug all of your sources into that box.

The standard is WirelessHD. Your inputs are connected wirelessly to the TV via a 60GHz signal, capable of transmitting full bandwidth 1080p60 at a distance of up to 30 feet. The transmission is lossless and is sent uncompressed. The same goes for audio, you can send up to 7.1 audio wirelessly between the box and the TV.

Samsung, Panasonic and LG all had TVs at the show with wireless inputs, all using the same WirelessHD standard.

Eventually I’d expect to see wireless outputs directly on CE devices and wireless inputs on TVs, cutting out the set top box middleman. I suspect that’ll be a while given how many legacy devices users will want to connect to their TVs.