When AMD and NVIDIA both started talking about GPU accelerated physics the holy grail was the following scenario:

You upgrade your graphics card but now instead of throwing your old one away, you simply use it for GPU accelerated physics. Back then NVIDIA didn't own AGEIA and this was the way of competing with AGEIA's PPU, why buy another card when you can simply upgrade your GPU and use your old one for pretty physics effects?

It was a great promise but something that was never enabled in a useable way by either company until today. Previous NVIDIA drivers with PhysX support required that you hook a monitor up to the card that was to accelerate PhysX and extend the windows desktop onto that monitor. With NVIDIA's 180.48 drivers you can now easily choose which NVIDIA graphics card you'd like to use for PhysX. Disabling PhysX, enabling it on same GPU as the display, or enabling it on a different GPU are now as easy as picking the right radio button option and selecting the card from a drop down menu. 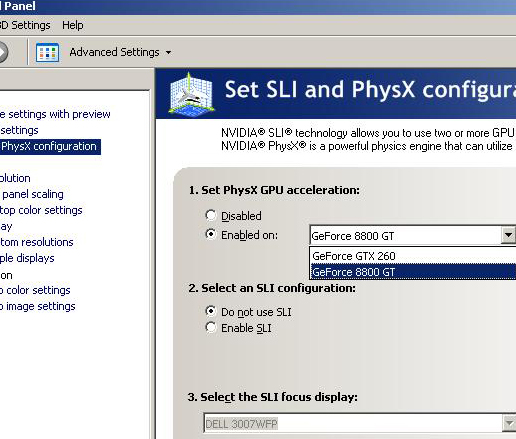 When we tested this, it worked. Which was nice. While it's not a fundamental change in what can be done, the driver has been refined to the point where it should have been in the first place. It is good to have an easy interface to enable and adjust the way PhysX runs on the system and to be able to pick whether PhysX runs on the display hardware (be it a single card or an SLI setup) or on a secondary card. But this really should have already been done.

There is another interesting side effect. When we enabled PhysX on our secondary card, we noticed that the desktop had been extended onto a non-existent monitor. 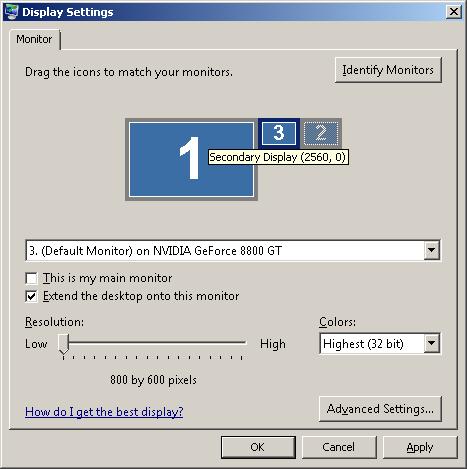 Windows has a limitation of not allowing GPUs to be used unless they are enabled as display devices, which was the cause of the cumbersome issues with enabling PhysX on a secondary card in the first place. Microsoft hasn't fixed anything from their end, but NVIDIA has made all the mucking around with windows transparent. It seems they simply tell windows a display is connected when it is actually not. It's a cool trick, but hopefully future versions of Windows will not require such things.

Mirror's Edge: The First Title to Impress us with GPU PhysX?

Around every single GPU release, whether from AMD or NVIDIA, we get a call from NVIDIA telling us to remember that only on NVIDIA hardware can you get PhysX acceleration (not physics, but PhysX). We've always responded by saying that none of the effects enabled by PhysX in the games that support it are compelling enough for us to recommend an underperforming NVIDIA GPU over a more competitive AMD one. Well, NVIDIA promises that Mirror's Edge, upon its release in January for the PC will satisfy our needs.

We don't have the game nor do we have a demo for anything other than consoles, but NVIDIA promises it'll be good and has given us a video that we can share. To under line the differences between the PhysX and non-PhysX version, here's what to look for: glass fragments are a particle system without PhysX and persistent objects with (meaning they stick around and can be interacted with). Glass fragments are also smaller and more abundant with PhysX. Cloth is non-interactive and can't be ripped torn or shot through without PhysX (it will either not there at all or it won't respond to interaction). Some of the things not shown really clearly are that smoke responds to and interacts with characters and leaves and trash will blow around to help portray wind and in response to helicopters.

Another aspect to consider is the fact that PhysX effects can be run without GPU acceleration at greatly reduced performance. This means that AMD users will be able to see what their missing. Or maybe an overclocked 8 core (16 thread) Nehalem will do the trick? Who knows... we really can't wait to get our hands on this one to find out.

We'll let you be the judge, is this enough to buy a NVIDIA GPU over an AMD one? What if the AMD one was a little cheaper or a little faster, would it still be enough?

We really want to see what the same sequence would have looked like with PhysX disabled. Unfortunately, we don't have a side by side video. But that could also significantly impact our recommendation. We are very interested in what Mirror's Edge has to offer, but it looks like getting the full picture means waiting for the game to hit the streets.