I tried an experiment while I was testing Nehalem, I recorded power consumption while running every single benchmark I ran for the review. I did the same for Intel's Core 2 Extreme QX9770 and compared the two. I published an abridged version of these results in the review, basically showing that the Core i7-965 offered much better power consumption, across the board, than the equivalently clocked QX9770 while the Core i7-920 was outshined by the Q9450 which drew less total system power. Both datapoints were valid but there were too many unanswered questions to draw any serious conclusions at that point. I met with Intel several times since the review went live, tested and retested processors and I believe I've come up with an understanding of what's going on from a power standpoint with Nehalem.

All three of Intel's Core i7 CPUs that will be available at launch this month are 130W TDP parts. At 3.2GHz that's expected, but at 2.66GHz that's a bit high compared to Intel's other quad-core 2.66GHz processors on the market. The Core 2 Quad Q9450, for example, has a 95W TDP and runs at 2.66GHz. The lower TDP is made possible by a lower core voltage, which is enabled by the fact that Intel has been building quad-core Penryns for a while and yields are high enough where driving core voltage down is possible. The same will eventually happen to the Core i7, but it's such a new design, such a radical departure from Intel's previous Core based CPUs and so early in the manufacturing process that there simply hasn't been time to get yields high enough to produce < 100W TDP 2.66GHz parts. 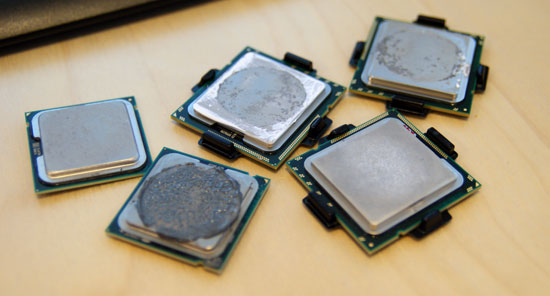 ...and plus lots of Nehalems are more fun

The Q9450 can operate at voltages down to 0.85V and as high as 1.3625V, while the Core i7-920 currently appears to be limited to a minimum of around 1.137V. Power consumption of a CPU at a fixed clock speed is proportional to the square of the voltage, so despite whatever power efficiencies Intel has included in Nehalem they will not outweigh a Penryn running at a lower core voltage. So we'd expect the Core 2 Quad Q9450 to have lower power consumption than the Core i7-920, at least today, until Intel can get a competitively low TDP 920 out on the market. But what about the i7-965?

The Core 2 Extreme QX9770 has a 136W TDP, slightly higher than the 130W TDP of the Core i7-965 and both running at the same 3.2GHz frequency. Now this comparison gave me some very interesting data, look at the power consumption numbers across all of the benchmarks (note that this is average system power, recorded over the entire benchmark run for each test):

When compared to the QX9770, the Core i7-965 draws at worst near to or slightly more than the same amount of power, but at best, you see a significant reduction in total system power consumption. There are only two cases where the QX9770 draws less power than the i7-965.

Note that the idle power on the i7-965 is very low, one thing that must be enabled to achieve this is the QPI power management option in the X58 BIOS which for whatever reason was disabled by default in our original review.

If you want to look at performance, here is the corresponding performance data to that power data:

I confirmed that I didn't have a particularly low power Core i7-965 by testing multiple chips, and Intel confirmed that my QX9770 fell within the middle of its distribution for power characteristics of all QX9770s. It looks extremely probably that at the same TDP level, Nehalem has the ability to be much more power efficient than even Penryn - all without so much as a die shrink, remember that both of these CPUs are built on the same 45nm process.