We've heard frequent complaints about "input lag" on various LCDs, so that's one area we look at in our LCD reviews. You might be wondering why we put input lag in quotation marks, and the reason is simple: while many people call it "input lag", the reality is that this lag occurs somewhere within the LCD panel circuitry, or perhaps even at the level of the liquid crystals. Where this lag occurs isn't the concern; instead, we just want to measure the duration of the lag. That's why we prefer to call it "processing lag" or simple "display lag".

To test, we run the Wings of Fury benchmark in 3DMark03, with the resolution set to the native LCD resolution -- in this case 1920x1080. Our test system is a quad-core Q6600 running a Radeon HD 3870 on a Gigabyte GA-X38-DQ6 motherboard -- we had to disable CrossFire support in order to output the content to both displays. We connect the test LCD and a reference LCD to two outputs from the Radeon 3870 and set the monitors to run in clone mode.

The reference Monitor is an HP LP3065, which we have found to be one of the best LCDs we currently possess in terms of not having display lag. (The lack of a built-in scaler probably has something to do with this.) Again, we know some of you would like us to compare performance to a CRT, but that's not something we have around our offices anymore. Instead, we are looking at relative performance, and it's possible that the HP LP3065 has 20ms of lag compared to a good CRT -- or maybe not. Either way, the relative lag is constant, so even if a CRT is faster at updating, we can at least see if an LCD is equal to or better than our reference display.

While the benchmark is looping, we snap a bunch of pictures of the two LCDs sitting side-by-side. 3DMark03 shows the runtime with a resolution of 10ms at the bottom of the display, and we can use this to estimate whether a particular LCD has more or less processing lag than our reference LCD. We sort through the images and discard any where the times shown on the LCDs are not clearly legible, until we are left with 10 images for each test LCD. We record the difference in time relative to the HP LP3065 and average the 10 results to come up with an estimated processing lag value.

It's important to note that this is merely an estimate -- whatever the reference monitor happens to be, there are some inherent limitations. For one, LCDs only refresh their display 60 times per second, so we cannot specifically measure anything less than approximately 17ms with 100% accuracy. Second, the two LCDs can have mismatched vertical synchronizations, so it's entirely possible to end up with a one frame difference on the time readout because of this. That's why we average the results of 10 images, and we are confident that our test procedure can at least show when there is a consistent lag/internal processing delay.

Despite what the manufacturers might advertise as their average pixel response time, we found most of the LCDs are basically equal in this area -- they all show roughly a one frame "lag", which equates to a response time of around 16ms. In our experience, processing lag is far more of a concern than pixel response times. Here is a summary of our results. Images for the E2200HD and E2400HD can be found on pages four and seven of this review; images for the remaining LCDs are available in our 24" LCD roundup. 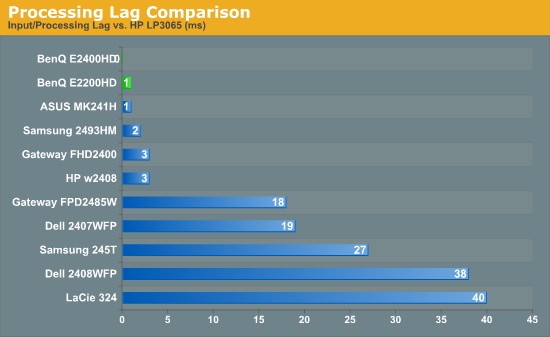 As mentioned previously, all of the S-PVA panels we have tested to date show a significant amount of input lag, ranging from 20ms up to 40ms. We will have a look at an MVA panel in the near future, which will hopefully show results similar to the TN and S-IPS panels, but for now we can only recommend avoiding S-PVA panels if you're concerned with input lag.