Guitar Hero World Tour: The Best, The Worst, and Everything in Between

The Instruments: The Guitar and Mic

So here it is: the thing we like best about GHWT. The new guitar is terrific. Hopefully in the next version of Guitar Hero we'll see them steal the auto calibration idea from Harmonix, but other than that this is a great controller. First let's compare it with the old Guitar Hero controller. 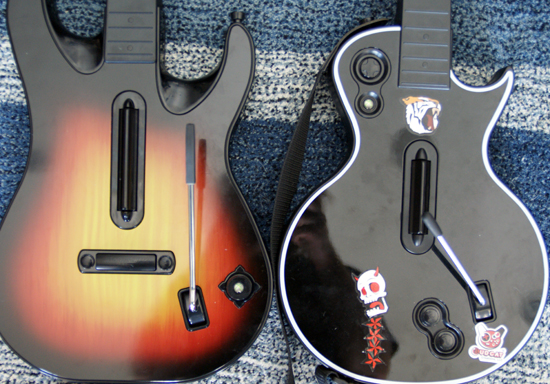 Aside from the neck slide, the changes are subtle. The strumbar is longer, which is awesome. It's solid and clicks when engaged and not sloppy like the RB2 strumbar (also awesome). There is an added star power button right next to the strumbar with two start buttons on either side. This is a great idea, but for the way I play (not sure about everyone else) I would prefer the star power button be a little lower than the strum bar, lets say about the width of my palm away. This little bone in the black circle causes my problems ...

Right now it's possible to hit the button, but I've really got to take my hand off the strumbar to do it (which defeats the purpose). When I try and press it, I just hit the start button (along side the star power button) with what I believe is my pisiform bone (or something else that protrudes from the volar surface of the proximal row of the carpus).

This both engages star power (if I'm lucky) and pauses the game. This is not optimal. 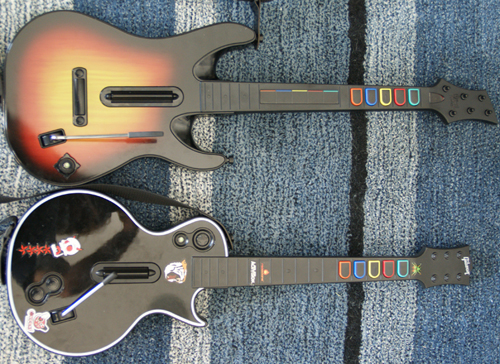 Probably the nicest thing is that the fret buttons are easier to push down. They feel the same, but just lightly tapping them activates them now, which is much nicer on strained hand muscles, especially after hours of playing. We still prefer the button style of the RB2 controller, but the major advantage (the decreased forced required to play) is now nullified. 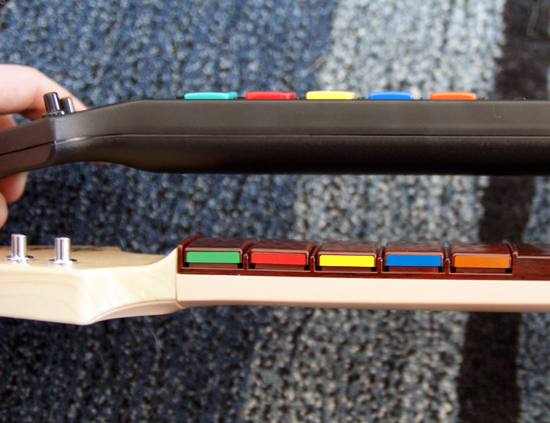 On top of this, the GHWT instruments now feature a connection for the XBox live headset. This is great for online play and is definitely something missing from the RB2 instruments. They also continue to include the RJ11 connector for attaching a pedal to activate star power. Which is a better way to do it than tilt or buttons, but requires the purchase of an add on (or some DIY hacking and an old phone).

So on to the new hardware: the touch sensitive neck slide. This is a pretty interesting feature, but we couldn't get much use out of it. When the "slider gems" pop up it's really difficult to switch between the fret buttons and the neck slide and back again. It's also tough to tap normal notes on the neck slide with the right timing and accuracy. We REALLY want to be able to use this like normal buttons: I want to hold my finger on the green pad and strum a note. Currently this can't be done, which really doesn't make any sense at all. It fells more like a real guitar, would allow easier sliding between notes than any buttons ever, and would really add to the experience. 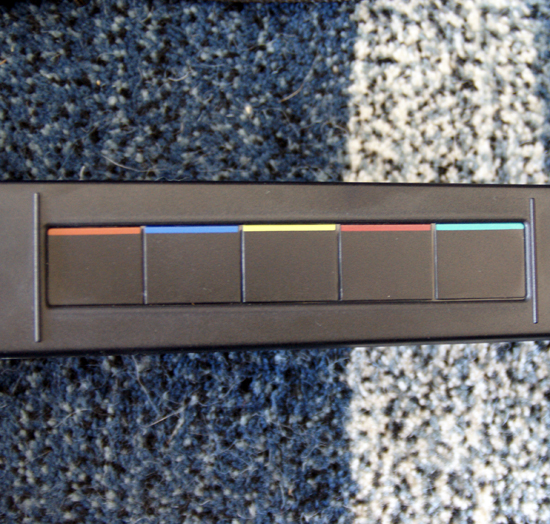 All in all, the neck slide is a cool idea that fell way too short with this first implementation. Hopefully next time around we'll see them get it right, but right now it's just taking up space on the controller. 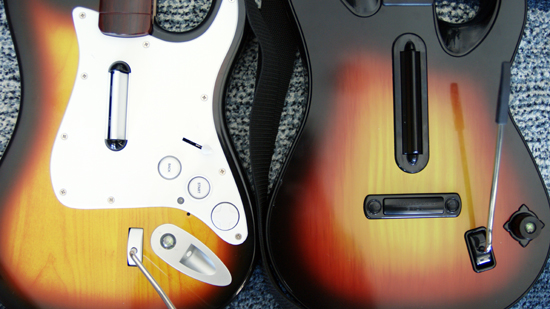 Overall, the Guitar Hero World Tour guitar controller is a good balance and easier for me to play than the RB2 controller. Keep in mind I prefer the RB style controller over the original GH controllers, so the subtle tweaks to the rest of the guitar really made a difference for me. Of course, your mileage may vary. Both controllers are good and it will likely come down to personal preference on which one you go with.

Beyond hardware, GHWT extends the functionality of the game a bit. They've added open notes (represented the same way a kick drum hit would be shown on the drums: a horizontal purple line across the highway). These notes are strummed with no buttons held down. It gets really cool with open note pull offs and makes for some more intricate gameplay. With Rock Band 2 I always found myself holding down the lowest note I needed and just playing the upper ones over top, but with the introduction of open notes you've got to be able to lift all the way off and come back. It's really just another subtle step towards better emulation of real guitar techniques. We're still a long long way off on that, but every step in that direction is a good one.

Another really neat feature is that sustained notes can be sustained /through/ other notes. For example, let's say you play a green sustained note. In some songs, you can hold this down and keep playing other colored notes on top of it. It's actually pretty cool and well done in the songs where we've seen it. This and the other tweaks to the guitar really do make it so that GHWT comes out ahead in terms of a guitar and bass for music games. That's not to say that Rock Band 2 is way off, as you can see if you search youtube for head to head videos. But simply playing the guitar and bass on GHWT is more fun with the extras. 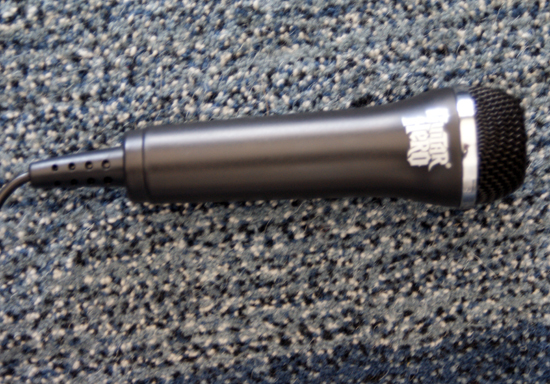 As for the mic, it's the same as the Rock Band mic. You have to tap it to activate star power, but this just does not work. It's way too difficult, and we've tried different types and styles of tapping and it's really hit or miss (pardon the pun). The better way to go is to hit any of the 4 main buttons on the XBox controller. This is even easier if you go with a 3rd party mic that doubles as a controller so you don't have to hold two things to sing.

The only other thing to mention about singing is that it is MUCH pickier about getting it right than Rock Band or Rock Band 2. Singing on hard is VERY hard. And that's not just cause I have a hard time with it. It's cause it's actually difficult. You've really got to nail the transitions between notes and words to get by in this game.

On to the drums.