Guitar Hero World Tour: The Best, The Worst, and Everything in Between

Our recent coverage of Rock Band 2 told a story of love, hate and uncertainty. Today, we cover that uncertainty with a review of Guitar Hero World Tour that fills in the gaps. That's not to say you have to go read the Rock Band 2 article if you haven't: no pop quizes, I promise. The point is that we now have the missing piece for a lot of people: the first music game that adds drums in the franchise that started the craze. Will it live up to the hype, or not? Or will it go a third direction. I'm going to bet on that last one. But that's a little unfair since I'm writing the review ;-)

Anyway, let's get the overview out of the way first. Guitar Hero was the first, and many music gamers cut their teeth on it. Guitar Hero World Tour (GHWT for short), takes it to the next level adding the same compliment of 4 player guitar, bass, drum and vocal action. GHWT is a different game than RB2, though. The approach is different, the implementation is different, and the end result is different in spite of the fact that the underlying concept is the same. 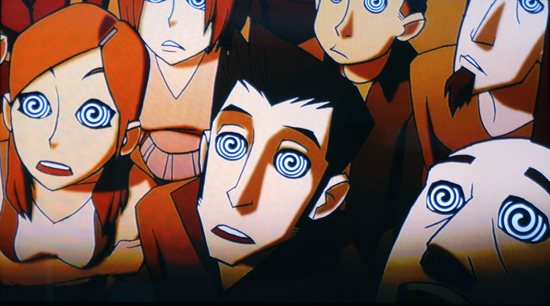 The first notable feature is the cartoonish interface. Rock Band and RB2 are a little more polished and clean looking, but different people will prefer different looks, so this isn't a huge thing. But the functionality of the interface is a bit clunky. We'll cover that more when talking about game modes, but navigating the game is less natural than RB2. Career mode is essentially broken up into 4 different solo careers and one band career, and the line up of songs you encounter is geared more toward the career for that instrument rather than a generalized tour like with RB2. This is good and bad. Actually, you'll probably see that phrase a lot in this article, so prepare yourself. 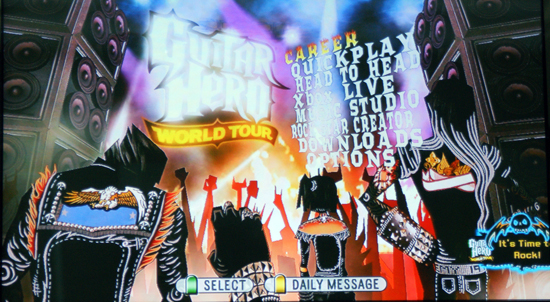 We would expect nothing less from a game called Guitar Hero than innovations in the guitar interface. GHWT also took an aggressive stab at RB2 with a more complex drum controller, but the special sauce is really in their guitar as far as we are concerned. The mic is the mic and it's just about the same as the RB2 mic. There are a couple neat differences in how some things work allowing a little more flexibility, but some of the "innovations" are more frustrating than fun.

The music studio is fairly full featured and allows for a little more creativity than the drum "freestyle" mode in RB2. There is also no way to freestyle with the guitar or bass in RB2, so GHWT adds that as well. But there are some really difficult issues that get in the way of this being a real solid feature.

GHWT online play is better in some ways and worse in others than RB2. Like I said, that'll happen a lot. Let's dispense with this preparatory overview nonsense and really dig in. First up, the guitar (and a sentence or two about the mic).