The Sony A700 uses the same 12.3MP sensor featured in the Nikon D300, but it was not as well received as the D300 when it was introduced. The main complaint was the poor quality of Sony's built-in JPEG processing and the fact that noise reduction (NR) could not be turned off in RAW mode. Sony has addressed the early criticisms with several firmware upgrades that have finally culminated in firmware Version 4 which was released at the same time as the A900. With firmware v4 the Sony JPEG processing is finally competitive with other top cameras, noise algorithms are more competitive, and you can finally adjust or turn off NR in both RAW and JPEG modes. Many consider output of the Sony A700 with v4 firmware finally to be competitive with the well-regarded Nikon D300. 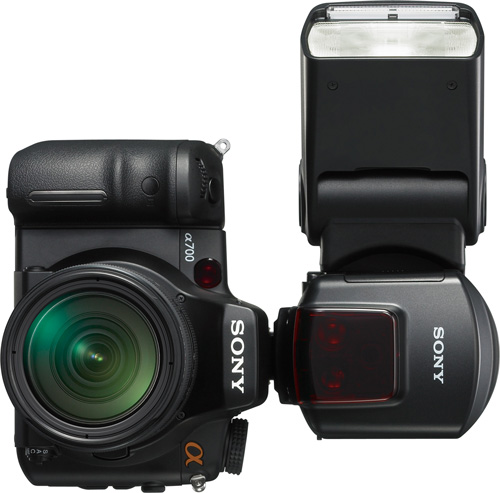 Since high ISO noise is now much better controlled in JPEG mode on the v4 A700, it should be interesting to compare noise over the range of ISO adjustments to the Sony A900 full-frame. Even though the A700 is an APS-C size sensor, resolution at 12.3MP is about the same as the Nikon D700 and the Canon 5D. The actual view of a 150x250 pixel crop will be about the same as the Nikon D700 or Canon 5D.

Once again, we compare the Sony A700 to both same pixel size crops, and 0.5x crops that represent the same area of the image in each capture. The same pixel crops are 150x250 actual pixels captured from both images. The 0.5x crops are TWICE the number of pixels in a 212x353 capture which has been adjusted from the standard 350dpi to 248dpi so the crop you are viewing is approximately the same size as the crop from the 12.3MP camera.

The resolution of the A900 sensor is astounding, but there is no escaping that it is also an inherently noisy sensor at high ISO. This is especially evident in comparing the A900 noise tests to the 12.3MP APS-C sensor used in the year old A700. This is the same sensor used in the Nikon D300 (and the new Nikon D90), and our A700 test shots were with a camera using the latest v4 firmware.

If we pixel peep the ISO 1600 output of the A900 is about as noisy as the ISO 6400 output of the A700, which came as quite a surprise. Since sensor density is a bit lower on the 24.6MP A900 than the 12.3 MP A700 this was not expected. If the comparison is made to 0.5x A900 crops the noise advantage for the A700 is still more than a stop. The only conclusion is that the A900 sensor is inherently noisier than the latest refinements of the A700, or that Sony can lower noise in the A900 further with firmware/software updates. It is also interesting that the Sony A900 tungsten color balance is much warmer than the tungsten balance of the A700.

Please do not misunderstand these conclusions in looking at pixel-level crops from JPEG test images. There could be other variables at play. However, Sony has trumpeted the v4 firmware for the A700 as incorporating all they learned in developing the A900. That leads to the assumption that processing should be very similar between these two Sony cameras. Provided that is the case the A900 sensor is noisier at high ISO values than the A700 sensor by at least one stop once the resolution differences are accounted for and two stops in pixel peeping.

If you look closely at the A900 images, there is also no escaping the incredible detail captured with the 24.6 MP sensor. Even with increased noise at higher ISO the captured detail is stunning.