Many of the first Blu-ray titles simply had their video encoded in MPEG-2, something that has been accelerated on GPUs for years. What made decoding these MPEG-2 based Blu-ray movies so processor intensive was the sheer amount of data that had to be decoded. While MPEG-2 DVDs ran from 3 - 9Mbps, MPEG-2 Blu-ray discs were in the 20 - 40Mbps range. Pushing more than 10x the bitrate of DVDs made decoding a much more difficult task, regardless of the relative simplicity of the MPEG-2 codec. Things got worse when discs started being authored with H.264 or VC1 for the video stream.

Let's make this very clear: the 1080p video decode quality between all GPUs should be the same. The hardware accelerated side of the decode is simply letting the GPU do the calculations required to reconstruct an individual frame rather than sending them to the CPU, the resulting frame should be the same regardless of what GPU you run it on. It's like how you can guarantee that calculating 2 + 4 on an AMD system will give you the same result as 2 + 4 on an Intel system. That being said, each vendor has its own video optimizations that will try to make the picture look "better", but thankfully most of these optimizations can be disabled.

We used to see differences in video decode quality with interlaced sources because the GPUs would handle the reconstruction of progressive frames differently, but with Blu-ray content stored progressively, de-interlacing is only an issue for watching certain broadcast sources. That being said, while video decode quality should be the same, video offload performance and features will help differentiate these GPUs.

In order to make sure our assumptions were correct we took a few screengrabs from Casino Royale on Blu-ray. Click on the links under the image to compare the outputs from the various chipsets: 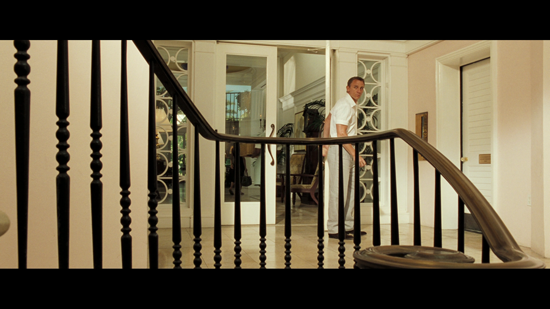 All of the drivers disable any of the features that oversaturate colors or perform any additional postprocessing on the decoded stream, which is preferable especially when your source content is a Blu-ray disc. Because of this, the video output looks nearly identical between all three platforms as expected. Of the three, NVIDIA offers the most control over post processing features in its driver.

Most movies are recorded at 24 frames per second, however most displays and graphics cards refresh the screen 60 times per second (60Hz). Enter the home theater space and you'll find a number of displays that can properly output a 24 fps signal, but with an HTPC you'll need a video card that can properly output a 24Hz signal. Support for 24 fps playback isn't necessary, but you'll find that without it wide panning shots won't be smooth as the camera moves from one point to the next. The reason is that it's impossible to evenly divide 24 frames into 60, so some frames end up being displayed more than others (the infamous 3:2 pulldown).

On one end of the spectrum we have Intel's G45 which absolutely does not support proper 24p playback. The G45 still does not have official support for it in the drivers and although 24 fps playback is possible in the hardware, we seriously doubt the software group will implement it (that's a dare).

The AMD 780G/790GX results were very choppy at times; even when they seemed smooth we experienced audio sync problems.

The only platform that can properly handle 24 fps output is NVIDIA's GeForce 8200/8300. It just works.

We've been talking about 8-channel LPCM for quite a while now, if you want to know what this is consult our article on the topic. Currently the Intel G35/G45 and NVIDIA GeForce 8200/8300 chipsets support 8-channel LPCM output via HDMI. AMD continues to trail with 2-channel LPCM output on their chipsets. However, they are offering 8-channel LPCM support on the HD 4xxx series of video cards. Of course that option comes with an additional cost and potential problems such as incompatibility with AVR receivers (i.e. those from Yamaha). NVIDIA removed the option for selecting 5.1 channel support in their HDMI drivers, instead offering only 7.1 for multi-channel setups, but this option returns in a soon to be released audio driver set.