AMD vs. Intel vs. NVIDIA: Fight

At the heart of AMD's 780G we have what AMD is calling a Radeon HD 3200 graphics core, providing the most powerful (on paper) integrated graphics on the market today. The table below should shed some light on the balance of power:

While Intel's G35, NVIDIA's GeForce 8200, and AMD's 780G all have 8 of what we're calling "SPs" or stream processors, their clock speeds and capabilities vary greatly from one to the next. Intel and NVIDIA are closest in this regard, as each SP has a peak throughput of a single instruction per clock. AMD's architecture is a bit more capable in the sense that each SP can have a maximum throughput of 5 instructions per clock. It gets a bit more complicated as NVIDIA has separate hardware for transcendental operations, which occupy one of the five "slots" in each AMD SP.

If you multiply it all out that gives Intel a throughput of 8 instructions per clock for G35, 10 for G45, 10 for NVIDIA's GeForce 8200 (where two are transcendental operations) and 40 for AMD. In terms of worst case throughput however, AMD falls down to 8 per clock (assuming the compiler can't feed the hardware 4 shader ops + 1 transcendental per SP) as does NVIDIA. This worst case rarely happens, but it is definitely worth noting.

Taking clock speeds into account, Intel really falls behind here. While G45 has a similar instruction throughput to NVIDIA's architecture, it runs its SPs at 800MHz while NVIDIA runs its at 1.4GHz giving NVIDIA a 75% raw performance advantage. AMD's core runs much slower at 500MHz, but the SPs are far more complex, so we end up with the following scenarios:

In the best case for AMD, the 780G is 43% more powerful than the GeForce 8200, but in the worst case NVIDIA's hardware is 1.8x faster than AMD's thanks to the clock speed advantage and AMD's dependency on ILP within an instruction stream. The integrated graphics race then becomes even more variable than how AMD/NVIDIA stack up with discrete GPUs; the swing from an AMD advantage to an NVIDIA advantage is much wilder than what we see with the GeForce GTX 260 vs. Radeon HD 4850.

Our Intel test bed today features the Q9300 quad-core processor and the AMD/NVIDIA platform features the Phenom X4 9950BE. Both of theses processor offers terrific performance with decent power consumption and thermals for the cost. Our Patriot DDR2-800 Viper 4GB memory kit has served us well for the past few months and we highly recommend it. We chose Corsair for our HX-520W power supply that has served us well in testing a variety of IGP solutions. Our favorite midrange HDD continues to be the Western Digital SE16 640GB that provides the near perfect balance of price, performance, and capacity.

Our motherboard selection represents a small cross section of IGP products based on the Intel G35/45, AMD 780G, and NVIDIA GeForce 8200/8300 products. While we tested over fourteen motherboards for this article, we're using the results from the best of the best for each chipset. 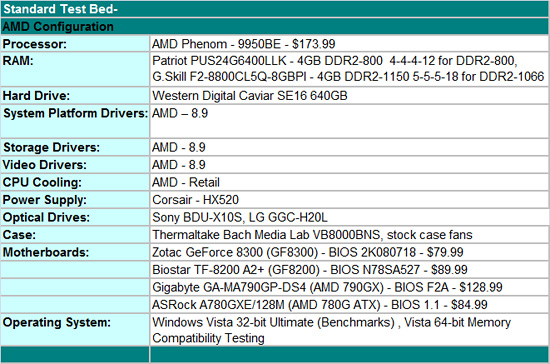 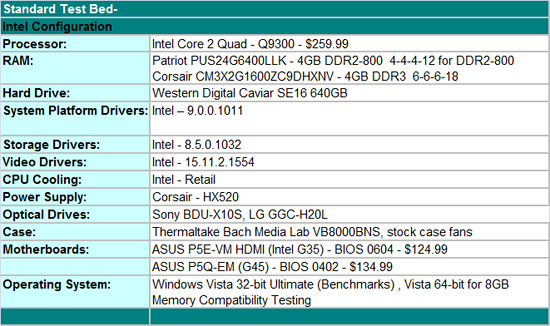