We have received numerous emails about the upcoming X58 motherboards concerning price, availability, and of course performance. Pricing has yet to be determined as we believe each of the manufacturers are waiting to hear what their competitors will charge for a board before committing to a price. What we do know is that the $185 price target mentioned for several X58 motherboards back at Computex has quickly turned into an exclusive $250 and up club from all indications.

Retail availability and launch date is another question that we cannot answer, we know the answer, it's just that our hands (and mouths) are tied by an NDA. All we can say it that it will be soon, but soon for some is tomorrow and for others it could be a month for now. Let's just say they will be out sometime this quarter.

Performance is another subject that we cannot discuss either. The reason is the same as above. Starting to see a pattern develop here? That's what an NDA will do for you. At least we can say this without having the legal eagles from the blue team sweep down upon us; the board we are showing today is the fastest one in the labs to date. It will also probably be the most expensive one, but hey, if you have to ask for the price then you probably can't afford it anyway.

That board is the ASUS Rampage II Extreme featuring the soon to be released X58 chipset supporting an i7 processor. Designed for a very niche market and with limited production numbers, this board will be ASUS' primary weapon in the ultra high-end market against some stiff competition from Gigabyte and perhaps others. The Rampage "2 the" Extreme board is the latest and greatest contribution from the Republic of Gamers (ROG) design group. 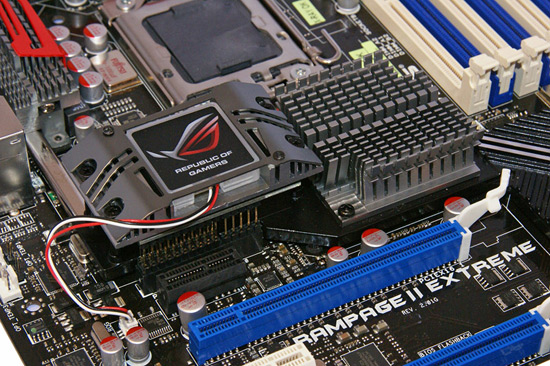 How fast? Imagine a cheetah sprinting for a gazelle after devouring a case of Red Bull. Actually, that has more to do with the 3.2GHz i7 overclocked to a healthy X.XGHz (Ed: Sorry, not yet!) with a few gigabytes of Qimonda's finest running at a leisurely 2200MHz. Yeah, we broke the 1.65V memory guideline, but there is a trick to it without causing permanent damage to the CPU, although our benchmark programs are crying foul right now. To be honest, this board does bring out the best in the new i7 in a very easy manner once you learn the tricks of the BIOS.

While we wanted to show the BIOS options today, ASUS is still discussing it internally. We will provide a gallery update once we get permission. For those of you weaned on overclocking the Core 2 series via the FSB design, get ready for the shock of your life. Those with experience overclocking the Athlon 64 and now Phenom processor series will feel right at home - just start substituting HT with QPI. It is a little more complicated than that actually, as a few of Intel's new features require some additional study. The other problem we have noticed is each of the motherboard suppliers like to name various BIOS options differently, resulting in a need to have five or six BIOS guides ready for the launch on 1X/XX/2008 (Ed: Not going to get away with it).

All that said, let's take a quick look at the ASUS Rampage II Extreme and see what makes this board tick.