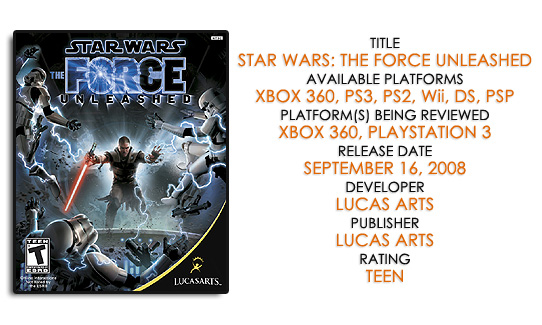 There's definitely something to be said for a franchise that's been alive for over thirty years. In 1977, Star Wars was born, a movie that would define the path of many film directors and fans alike. Even though the series' biggest fan base consists of thirty and forty-somethings, the younglings of the generations that followed were introduced to the popular films and followed suit. Today, with no more Star Wars movies to be made, their fandom continues to thrive with special edition film releases, memorabilia, toys, and of course, video games.

The Force Unleashed is the latest offering in the multitude of games sporting the Star Wars trademark. While gameplay is definitely among the utmost concerns in video games, Star Wars fans are equally concerned with storylines and how they tie into the movies. Players can surely expect such a tie-in with familiar faces along the way in a journey that took place a long time ago, in a galaxy far, far away.


The game's story takes place during the undiscovered time between episodes 3 and 4 of the film series. Those who sat through episode 3, the latest of the six films, know that Palpatine, portrayed as the Emperor in the original trilogy, had devised a plan to destroy the remainder of the Jedi order in an attempt to take over the galaxy. In The Force Unleashed, we see the execution of this plan by none other than Palpatine's own apprentice Anakin Skywalker, otherwise known as Darth Vader. [Cue deep breathing sounds….]