We wouldn't dream of letting an Intel launch go by without complete and thorough coverage. Can you imagine the Nehalem launch without reviews on launch day? Or even the release of Intel's first mainstream SSDs without an article going through the technical merits of the chip giant's design? Yet skip a product release was exactly what we did with the introduction of one of Intel's latest chipsets: the long awaited G45.

When I visited CeBIT in Germany earlier this year I noted that the stars of the show were the chipsets. We had 780G from AMD, GeForce 8200 from NVIDIA and G45 from Intel. Nearly every single motherboard had either a DVI or HDMI port on it, and full Blu-ray acceleration was supported across the board by all of the vendors. We were about to enter the golden era of chipsets with integrated graphics and CeBIT was the first indication of it, but what happened?

In fact, out of all three vendors, only AMD was able to deliver on their promises in a timely manner. Despite lacking in one key feature (8-channel LPCM support), the 780G chipset was honestly the most impressive chipset launch from AMD to-date. Gigabyte's 780G board was so good in fact that despite Intel's microprocessor superiority, the board was strong enough to be my choice in my own personal HTPC. While the G45 may have been the right chipset for me, the 780G was the chipset I could rely on right now and thus I turned to it.

NVIDIA shortly followed up with the GeForce 8200, however the first motherboards weren't anywhere near as polished as what was available with 780G and the integrated graphics performance was actually lower than AMD's. For a company that gave Intel such a hard time for delivering poor integrated graphics performance, NVIDIA was nothing but hypocritical. AMD's 780G put it to shame.

Time still went by and there was no G45; I was concerned. While both AMD and NVIDIA had tons of experience in building in support for full hardware H.264/VC1/MPEG-2 decode acceleration, this would be Intel's first attempt at such a feature. I'd seen demos of G45 running just fine and I was told that everything was ok, but I didn't have hardware. The first time I laid my hands on G45 was actually in mobile form during the mismanaged Centrino 2 launch, and it wasn't good. Blu-ray acceleration worked, but it wasn't usable at all. I chalked this up to the early Centrino 2 platform but once we got G45 boards in house, things weren't that much better.

The first boards (available for sale, mind you) and drivers had issues with Blu-ray playback in certain situations, HDCP problems and issues with HDMI repeaters (e.g. AV receivers). It was so bad that in AMD's suite during IDF one of the AMD demos was a 780G vs. G45 comparison, showcasing how broken the initial G45 release was. We struggled with G45 for much of the early weeks of its release, but the platform wasn't problem-free enough for a launch-day review.

As of late I get the impression that although Intel is quite successful and executing very well on multiple fronts, the strengths of Intel's less popular teams are no where near as great as their chip designers. We all saw this with the Centrino 2 launch I just mentioned - something we'd never see from the Nehalem guys. But Intel does far more these days than make desktop CPUs, there are chipsets, soon to be graphics cards, solid state drives, wireless adapters, notebook platforms, the list just goes on and on. The incredible revolution Intel was able to pull off in the desktop CPU space over the past 2+ years raises the bar for the rest of the company, and not all of the teams are able to perform quite as well.

What follows is the first part of a three part series on the current state of chipsets with integrated graphics. This first part looks closely at Intel's G45, presently the only LGA-775 chipset with full Blu-ray decode acceleration, as well as a quick comparison of the first G45 boards. Part two will widen our focus and compare G45 to competing Socket-AM2 chipsets with integrated graphics: mainly AMD's 780G and NVIDIA's GeForce 8200/8300. And finally we'll bring this whole series to a close in part 3 with a comparison of IGP gaming performance to the cheapest yet best performing available add-in PCIe graphics cards. After this series of articles we will dive into a AMD 790GX and NVIDIA 750a roundup to complete our look at the hybrid IG solutions.

A High Level Overview of G45

The G45 is very similar to the P45, with the addition of integrated graphics. These boards target essentially the same market, but G45 board will likely not be as targeted towards overclocking and may be a little cheaper. The major advantage of G45 will be for people who don't want any sort of 3D graphics on their desktop. While Intel continues to advance their graphics subsystem performance (as we'll see in the next article in the series), the performance still just isn't there for any but the simplest of 3D tasks. These boards should really go into systems that focus on 2D operations like office applications, internet, and general communication packages. That said, you can play certain types of games if they fall into the casual gaming category, you know, titles like Barbie Fashion Show up to Sims 2 will have acceptable performance at 1280x1024 resolutions.

With the intended target market being those who do not wish to overclock or game with the integrated graphics, we are looking at desktop computers targeted at business tasks and surfing the internet. The G45 provides support full Blu-ray acceleration and multi-channel LPCM audio output, so it will work as an HTPC platform. With a mainstream target, we expect these to end up in plenty of systems over the coming months, especially from the OEM sector. It isn't overkill for those who don't need a lot of features and overclockability, and it offers enough capability to get by in the home and in the workplace. 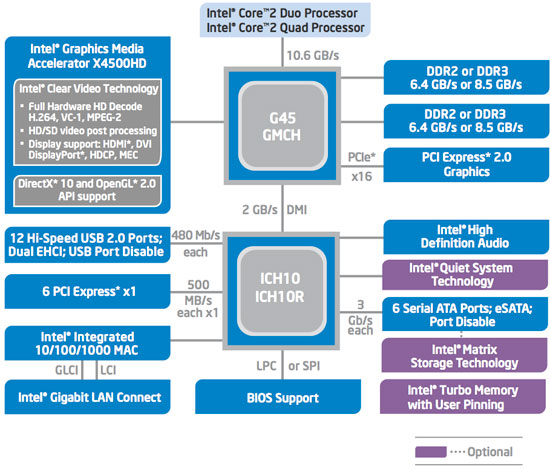 Before we look at the performance of the chipset, we will take a look at chipset features and capabilities and the southbridge. Understanding how this solution compares to the previous generation Intel integrated graphics chipset and how it compares to the other 65nm chipset offerings Intel has will help give us context for the performance comparisons to come.