What is Micro Four Thirds? 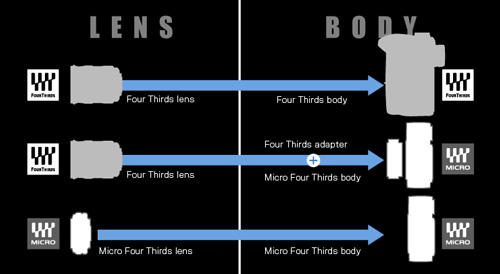 The Four Thirds standard is one of the smaller of the formats based on APS-C, but it is still about 75% of the area of the Canon XSi. However, compared to P&S sensors the Four Thirds sensor is huge.


If you have any doubt why the photo market has been moving to DSLR from P&S you have only to look at the last column detailing sensor density. At 12.1MP, the new Panasonic G1 will establish a new density high in the DSLR market at almost 5MP per cm2. However, the top-of-the-line Canon G9 P&S at 10MP has a tiny sensor by comparison and the density is 28 MP/cm2. The Olympus Super Zoom SP-570UZ is even worse at 36 MP/cm2.

The motivation for Micro Four Thirds should be crystal clear in this chart. Panasonic and Olympus are trying to extend their Four Thirds sensor technology to higher-end, higher-quality, but very small and pocketable interchangeable lens cameras. These new cameras will feature large hi-res LCD screens, full time Live View, and fast contrast-detect focusing. The top ones will also feature hi-res EVF, and video capabilities are mentioned in the Micro Four Thirds standard. It should be clear the idea is a new bridge technology that brings DSLR features, P&S features, and camcorder features together in a more compact and cheaper camera body.  In doing this they will create a new camera class, or chart directions for future interchangeable lens cameras, depending on market acceptance.