Full-Frame, 24.6MP, and SteadyShot Integrated IS

The A900 is the first Sony DSLR to feature a full-frame sensor. The sensor is approximately the size of a frame of 35mm film, which is 24x36mm. 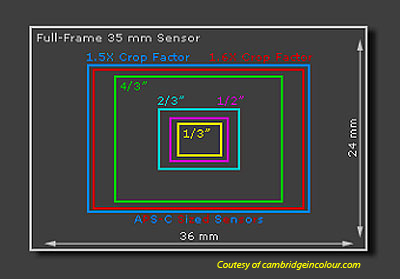 Most digital cameras today use a sensor closer to APS-C size.  As a result, lenses mounted on APS-C DSLRs behave as if they are 150% to 200% longer than the marked focal length. Other Sony DSLR cameras, like the A700, also feature a 23.5x15.6mm APS-C sensor.

In the computer world, increasingly smaller traces mean higher density, more transistors, and generally better and faster performance. However, the digital sensor is not a digital device; it is an analog device that gathers light and turns it into a digital signal. Sensors are the reverse of digital electronics in that larger is almost always better in sensors, with everything else equal. More details on how digital sensors actually work can be found in The Digital Sensor.

As you can see in this picture comparing the A900 and A700 sensors, the APS-C A700 is not even half the area of the A900.  This is true of all APS-C sensors with those from Canon, Sigma, Olympus, and Panasonic even smaller than the Sony/Nikon/Pentax APS-C sensors.

In the chart below,  APS-C sensors range from 28.1% to 42.9% the area of full-frame sensors.  Obviously there is a lot more information that can potentially be captured with a full-frame sensor with larger pixels.

The last column in the chart is the one that tells the story most accurately, however. Here the effective sensor resolution is divided by the sensor area to yield a sensor density. The lower the density, the larger the individual pixel size, and the more data that pixel can gather - all else being equal. There are a few surprises here, such as the Sony A350 being essentially the same density as the Canon XSi, and the new Canon 50D having the highest density of any current DSLR camera.

The last column does put into perspective the true potential of the full-frame sensor and shed some light on the true meaning of Sony's 24.6MP A900 sensor. At 2.9MP per cm2, the A900 still exhibits a lower density and theoretically better high ISO performance that any current APS-C DSLR. This is very much at odds with the ridiculous claims many on the web are making about Sony going too high in resolution on the A900. In fact, sensor density on the A900 is lower than the 10MP Canon 40D, which is 3.1.

The point is that any issues Sony may be found to have with noise are not the result of pixels being "too small". All else being equal the high ISO noise should be at least as good as an 8 to 10MP Canon sensor. Where the Sony does suffer is in comparison to sensor density of other full-frame sensors. In that metric the Sony has twice the pixels per cm2 of a Nikon D3/D700 and Canon 5D, and keeping up in high ISO performance with those cameras would be quite a feat. 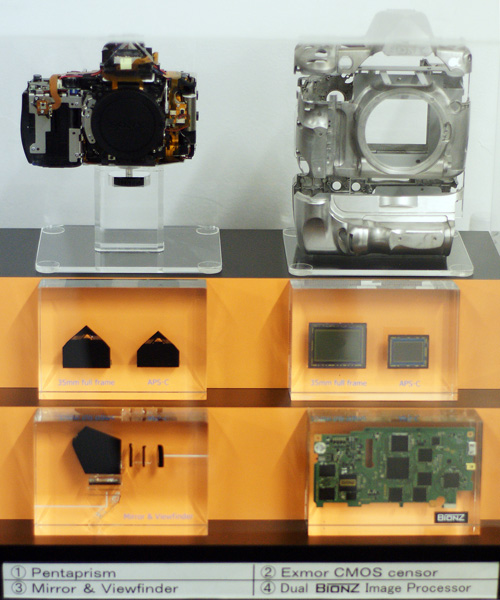 Moving a digital SLR camera to full-frame involves a lot more than just the sensor, however. Everything is bigger, heavier, and more difficult to accomplish. You can clearly see some of those challenges in this Sony case comparing sensors, pentaprisms, the microprocessor to move the huge increase in data (dual BIONZ), and the motors to control the in-camera image stabilization (IS). Rumors were rampant for months that Sony just could not get their signature SteadyShot IS to work in full-frame, which would have been a major failing had it turned out to be true. Now that we have used the A900 hands-on we can report that SteadyShot is definitely working as it should, and Sony still claims a 2.5 to 4.0 stop improvement in hand-holdability in the full-frame A900. 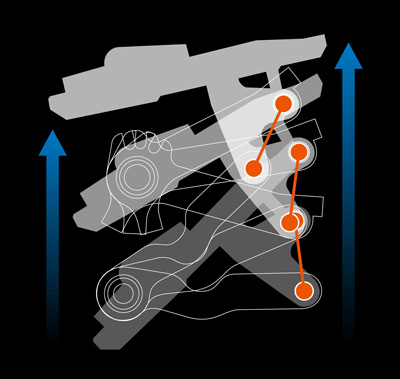 To accomplish this Sony employed a parallel-link to move instead of flip the mirror. This reduced vibration substantially to reduce the demands on SteadyShot. It also had the benefit of allowing a shorter front to back dimension while still utilizing a full-frame mirror.

The second innovation was the sensor motors themselves. Since SteadyShot is controlling heavier components in even greater motion than APS-C, the motors required a 50% increase in output. Amazingly, the motors were beefed up, twice as many pixels are being captured and processed with dual BIONSZ processors, and with the same NP-FM5000H battery used in the A700, A350, A300, and A200 they extended the expected battery life in the A900 to 850 shots. Even if you're predisposed to hate Sony because you are a loyal Canon fan, you have to admire the engineering that went into solving many of these challenges.