You know what I hate about rebooting my machine? Starting all of my applications back up as soon as it boots, the OS is always crunching away at my disk long after I've hit my desktop and it takes forever to launch my mail application, IM client and start a web browser. These aren't complex requests, but they take forever on a conventional hard disk.

I ran a quick test to illustrate the point. I took my test image and booted it, as soon as I got a cursor in Vista I launched Adobe Photoshop CS3, PCMark Vantage, Google Chrome and Norton AntiVirus 2008. I timed how long it took for all four applications to come up. Note that this is actually a best case scenario, since my testbed image is very clean with a minimal number of applications installed. As you fill up your disk with more applications and files the disparity grows. Remember that HDD performance decreases as your drive fills up, SSD performance doesn't.

The differences in time here aren't huge on paper, but they are tremendous when you're actually using the machine. The funny thing about an SSD is you don't always appreciate the benefit when you've got it, but go back to a mechanical disk and it'll feel like something is wrong with your machine. The difference is noticeable. 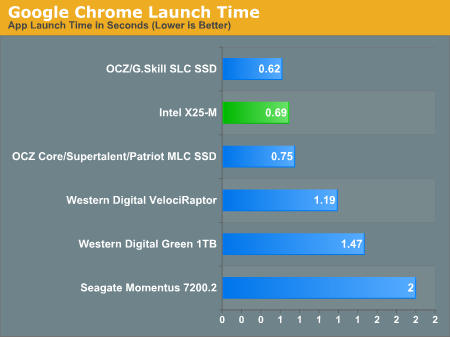 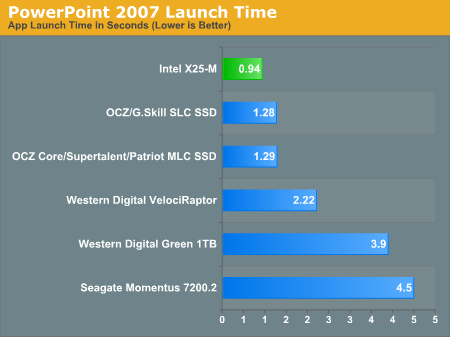 PowerPoint is similar to Chrome, but the application does take longer to load on mechanical disks. Again, the differences are noticeable - the X25-M will load PowerPoint in half the time of the VelociRaptor. You can argue that the price isn't worth it, but the point is that the load completes much faster...let's look at what happens when we're loading an application that does take a long time to start.

Photoshop takes its sweet time loading on a notebook drive, over 10 seconds on the Momentus 7200.2: 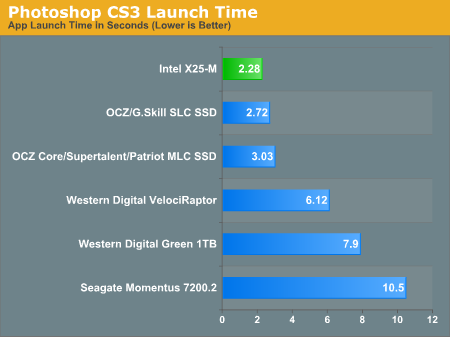 Even on the VelociRaptor it's a 6+ second ordeal. On the X25-M and all of the other SSDs, we're talking less than 3 seconds (the X25-M is naturally the fastest at 2.3 seconds).

My rule of thumb has always been that a good SSD will cut application launch times in half compared to a desktop hard drive, so if you have a particularly beefy application that takes a good while to load, expect that time to go down considerably. Remember, these are best case scenarios, in a little bit I'll start multitasking and then we'll separate the men from the boys.