Next up is PCMark Vantage, another system-wide performance suite. I chose to run the whole suite rather than just the HDD test to hopefully better characterize real world performance of these drives. 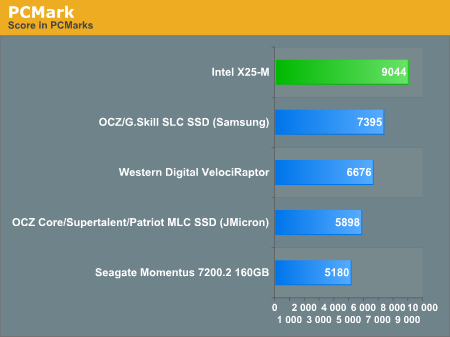 If we look at the individual test subsets of PCMark Vantage we can see the drive's strengths at work. 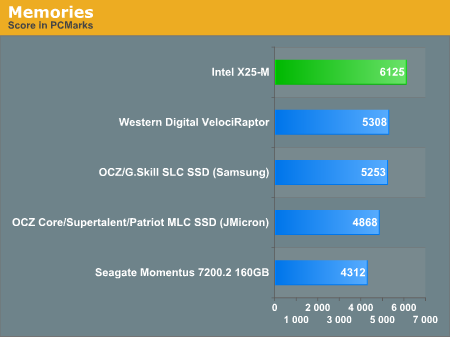 The memories suite for example includes a test involving importing pictures into Windows Photo Gallery and editing them, a fairly benign task that easily falls into the category of being very influenced by disk performance. The end result is a 15% performance advantage over the VelociRaptor, a 16.6% advantage over the Samsung SLC based SSDs and a 42% advantage over the 2.5" Seagate Momentus 7200.2 HDD - the X25-M is great for a desktop, but a miracle for a notebook. 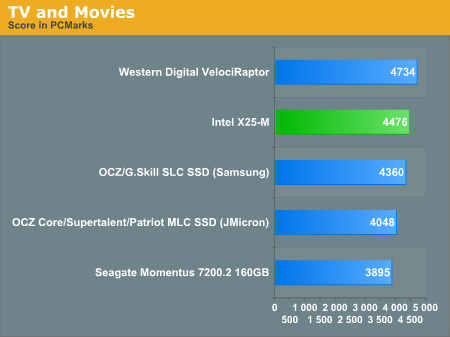 The TV and Movies suite shows that the X25-M won't always dominate. Here the tests are focused on video transcoding which is mostly CPU bound, but one of the tests involves Windows Media Center which tends to be disk bound. Despite the nature of the test, the X25-M competes at the top of the chart but is bested by the VelociRaptor. It's performance isn't bad, but not earth shattering. Again, compared to other notebook drives it is a dream come true. 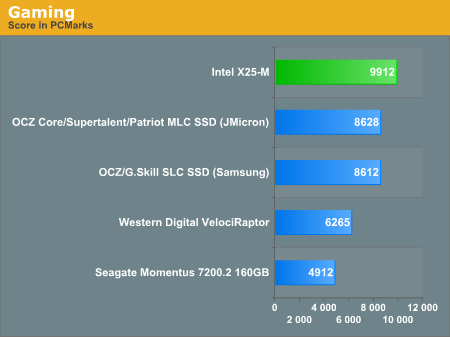 The gaming tests are very well suited to SSDs since they spend a good portion of their time focusing on reading textures and loading level data. All of the SSDs dominate here, but as you'll see later on in my gaming tests the benefits of an SSD really vary depend on the game. Take these results as a best case scenario of what can happen, not the norm. You can also see how tempting it is to opt for one of those JMicron based MLC SSDs, they perform quite well here - the test simply doesn't show the ugly side of living with them. 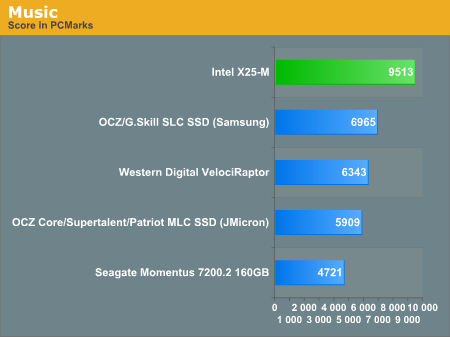 We're back to utter domination in the Vantage Music test. Here the main test is a multitasking scenario, which SSDs do quite well in: the test simulates surfing the web in IE7, transcoding an audio file and adding music to Windows Media Player (the most disk intensive portion of the test). The X25-M is nearly 60% faster than the VelociRaptor, around twice the speed of the Seagate Momentus 7200.2 and over 37% faster than the Samsung SLC based SSDs. When the X25-M is fast, it's very fast. 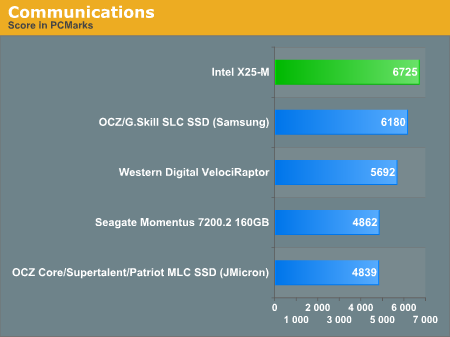 Despite the inclusion of Windows Defender, the X25-M's advantage over the VelociRaptor is only 18%. I would honestly expect more based on some of my other system scanning tests, but I believe the reason we're seeing general domination and not utter destruction is that the tasks being run alongside Windows Defender are quite light on the disk. Yes, I am nitpicking an 18% victory - this drive is that good. The SLC drives do well here but are no match for the X25-M. It's in tests like this that the X25-M really earns its keep, it delivers SLC performance at a much lower cost.

The Productivity test is awesome, let me explain: 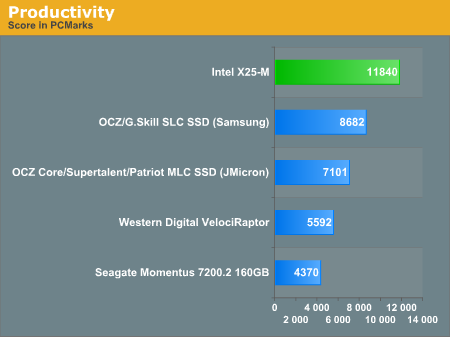 In this test there are four tasks going on at once, searching through Windows contacts, searching through Windows Mail, browsing multiple webpages in IE7 and loading applications. This is as real world of a scenario as you get and it happens to be representative of one of the most frustrating HDD usage models - trying to do multiple things at once. There's nothing more annoying than trying to launch a simple application while you're doing other things in the background and have the load take seemingly forever.

Note that the test itself isn't very write intensive, so even the JMF602 based MLC drives do well here. I can attest to this as one of the things that drove me to put a SSD in my desktop was that I wanted my applications to pop up instantaneously, regardless of what I was doing. The pausing doesn't get a chance to rear its head, so all of the SSDs rule the playing field here. The X25-M delivers 2x the performance of the VelociRaptor here and is faster than every other drive. Enough said.