Cooler Master already showed their new Silent Pro series at CES and CeBIT, and now we finally have the shipping product in our hands. However, so far only a few models are available, and with the lawsuit initiated by Ultra Products regarding modular power supply patents, Cooler Master unfortunately is not yet able to sell this series in the U.S. market. Rumors say that most of the affected companies have begun appeals against the patent, but they still await further court rulings on this case. Until that happens, folks over in Europe are the only ones that can enjoy this new product, which we will review today. (It's somewhat interesting to mention that before we could even publish this review, Cooler Master wanted to talk to their legal department first; luckily, we were able to talk them into letting us go forward.) 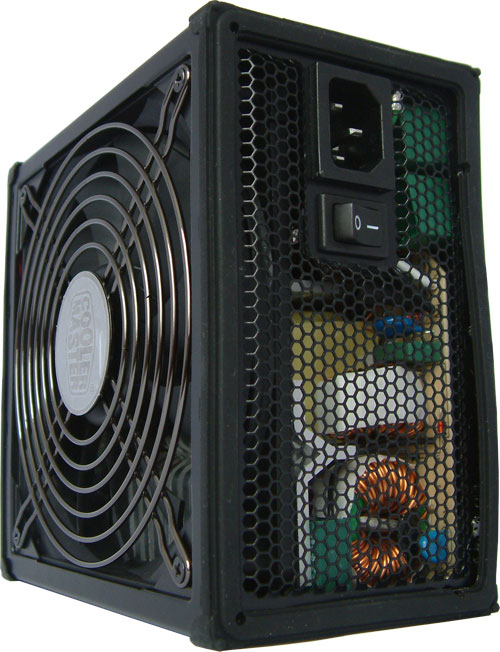 If you've followed our PSU reviews over the previous year, you can probably guess the ODM of the Silent Pro from this first image. Enhance has a deserved reputation of building high-end units, and they provide that service for quite a few companies. This time we are greeted by low to medium range 500W and 600W power supplies built by Enhance, and the performance has almost resulted in feelings of ecstasy during testing. The overall look is nice with rubber protection on the back and the front, and a large 140mm fan does the rest. We received both the 500W and 600W models, but we will focus primarily on the 500W unit for testing.

The label shows a single 12V rail with 34A and the 3.3V and 5V rails at 20A. This might seem a little low, but most systems don't need much power from the lower voltage rails anymore.