Innovation at the Keyboard Level

I’ve got the same problem with the Inspiron Mini that I had with the Eee PC, it’s simply too small to be ergonomic. With only an 8.9” display you end up looking down at the screen if you’re using it while sitting upright, much more than you would a normal notebook with a larger screen. This is hardly ideal as I find myself over tensioning my neck and upper back. While it’s a great way of getting a backrub from your favorite masseuse/friend it’s not exactly the most comfortable notebook to use.

All of these netbooks have an insufficient amount of space for a full keyboard, so sacrifices must be made. On the Eee PC ASUS attempted to preserve the standard keyboard layout and just made all of the keys very small. The benefit here is that you know where everything is, and switching between a normal keyboard and the Eee PC isn’t difficult, the downside being that you often fat-finger the keys. 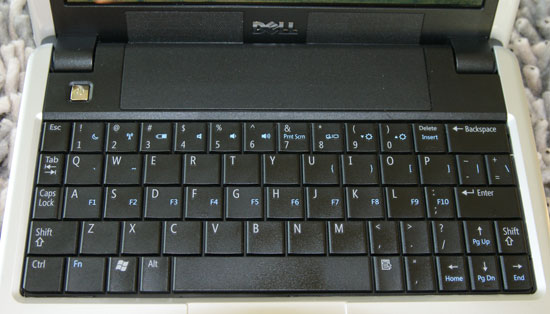 Dell chose a different route. It got rid of the row of function keys at the top and reorganized some of the punctuation keys, making the main letter keys significantly larger. On the Inspiron Mini 9 you’re far less likely to mistype a word, but throw in some punctuation (apostrophes, quotes, etc...) and your typing speed/accuracy goes down considerably.

The function keys moved to the home row on the keyboard, which means to close a window using the keyboard you have to hit ALT + Fn + F (which doubles as the F4 key when you hold down the Fn key). Thankfully it’s convoluted and different enough that you won’t get used to it and try to do it on a normal keyboard, and not annoying enough to really be a pain on the Mini. I’d say that’s quite possibly the most frequently used function key combination, the rest don’t really come up as much so I wasn’t too bothered.

The function keys on the Eee PC's keyboard

The function keys on the Mini's keyboard, note how they share the same keys as the home row

The keys that really bothered me the most were the hyphen, comma, colon and apostrophe keys. The colon/semicolon key is now directly to the left of the Enter, while the apostrophe/quote key is to the left of the left arrow key. If your big on leaving out apostrophes (see what I did there?) and don’t mind not quoting, ever, then the keyboard is livable. Otherwise, if you’re typing for accuracy, it’ll drive you insane - just in a different way from the Eee PC’s keyboard. 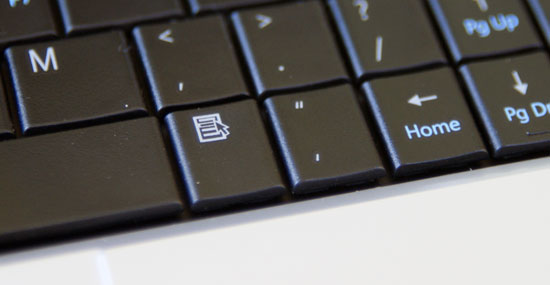 I'm sorry, what are you doing down there?

Dell makes the argument that after about 15 minutes you’ll get used to it. I agree. Except for the fact that in theory you’ll be going back to a normal keyboard at some point, and whichever you use the most will make the other one feel quite awkward. My money is on the fact that you’ll use a normal keyboard more than the Mini, in which case getting used to the funky comma positioning isn’t going to help anything.

That being said, I need to have some sort of a stance here so here it goes: if you’re just having casual IM conversation, facebooking or generally not doing any serious writing, I’d say the preference should be for the Dell keyboard - you can actually type words on it better than you can on the Eee. But for overall typing speed, the ASUS solution is better if you’re going to be switching between your netbook and other keyboards on a regular basis.

The table above should put things in perspective. On the MacBook Air, the dime is about the same size, if not smaller, than a single key. On the Eee PC the dime covers more than just a single key. The Inspiron Mini is closer to the Air than it is the Eee PC in its key sizes.

There's a tiny trackpad below the keyboard on the Mini, similar to the Eee PC. The Mini's trackpad supports scrolling, but only with a single finger along the right edge of the trackpad. ASUS' design is much better as you just use two fingers to scroll, with no stipulations on where you have to put them. I suspect that this is more of a cost issue as the Eee PC 901 is priced a good $200 over the Inspiron Mini 9.