Below you'll find live coverage, updated in real time, from the second and third keynotes at IDF. Refresh for the latest updates. All times are in EDT, the newest posts are at the top.

5:30PM - Time to go! 30 minutes until 3 hours of nothing but Nehalem, check back soon for more updates.

5:25PM - We're winding down here, Dadi just showed off some MIDs based on Menlow. Hopefully they're better than the early ones I played with back at CES.

5:22PM - ~1B IA processors shipping per year in the next decade. That makes much more sense. The plan is ~200M Atoms shipping per year by 2012. That's as many desktop CPUs as Intel is shipping today. Lofty goals Mr. Perlmutter, but we'd need a much better platform than what we have now - this is where Moorestown comes into play.

5:17PM - WiMAX demo: WiMAX video conference between John Sw, CTO of Clearwire Corporation, and all of us here in San Francisco. The video is smooth, but quality isn't all that great. 15Mbps WiMAX while driving 35mph. Nice.

5:16PM - WiMAX should be cheap, affordable and global. Ahem, no more per-SMS fees? I'd like to see the rest of the traditional cell phone providers jump ship to WiMAX...

5:14PM - Seven OEMs will be shipping notebooks with Intel WiMAX in Q4 '08. First WiMAX network in Baltimore, MD launching in the coming months.

5:13PM - Time to talk about wireless broadband. More WiMAX? Unfortunately, outside of IDF, WiMAX doesn't appear to be doing too well. Many of today's wireless demos were done using WiMAX at IDF.

5:11PM - A disable request is sent to the notebook wirelessly, since it has an integrated GPS the notebook can be tracked that way. You can also control the webcam remotely to get a look at who is using the notebook. Oh surprise, it's Pat Gelsinger. That sneaky Pat.

5:10PM - Anti-theft notebook demo; a ninja just stole Dadi's notebook with tons of secret roadmaps on it. Oh noes, what will he do?

5:07PM - Intel officially announced its SFF Centrino 2 chips. These are the smaller package CPUs and chipsets that were used in the MacBook Air, but now in Centrino 2 versions. I talked about them in our Centrino 2 launch article.

4:58PM - Calpella will be Nehalem for notebooks. This will happen next year with two and four cores.

4:57PM - What would a mobile demo be without also showing off the new SSDs we just talked about. Read our coverage from earlier today to find out more. 80GB MLC drives in September, 160GB drives in Q4. Intel is saying that these things are going to be fast.

4:55PM - They tried really hard to show off a good gaming experience on a notebook, but the gameplay of Assassin's Creed was choppy and horrible. They need a little work on picking apps for demos apparently.

4:54PM - Intel is also showing an HP notebook that can play a full 2 hour Blu-ray movie on one battery charge.

4:52PM - Intel just demonstrated switchable graphics on its Centrino 2 platform. By flipping a physical switch the demo system had its NVIDIA GPU turned off and switched to the integrated GM45 graphics. The actual switch took several seconds, much longer than the Hybrid Power tests I ran on the NVIDIA 780a chipset not too long ago. 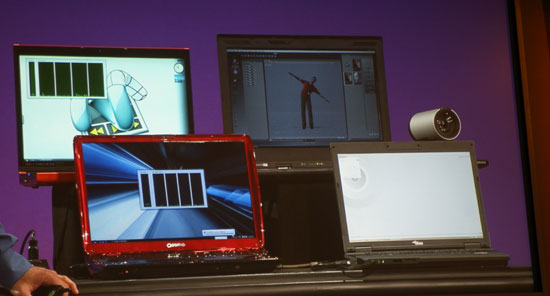 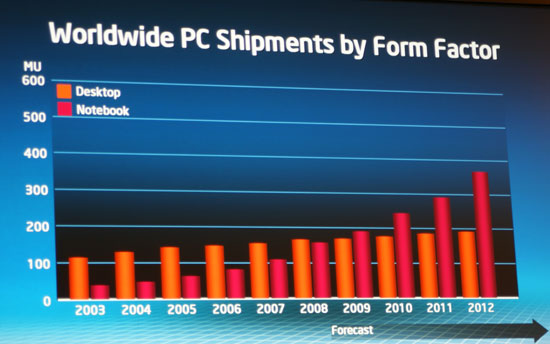 4:42PM - Dadi: "1 billion IA (Intel Architecture) devices targeted by the end of the decade"? No way. That's a ton of Atom processors sold.

4:40PM - Dadi Perlmutter is on stage now, time to talk about mobility. Wow, the Banias/Centrino project was first started 10 years ago. I feel old.

4:37PM - Larry adapted a line from the major general's song from The Pirates of Penzance for Larrabee. I'll spare you the horror that was the butchering of lyrics.

4:33PM - More about Larrabee. No need to sort for transparency demo. Sorry, that's as well as I can describe it. Look at the picture. 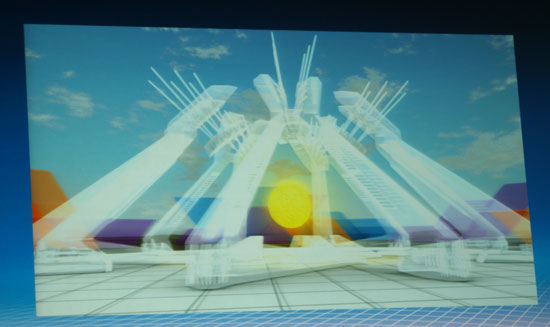 4:32PM - Dr. Larry Seiler is on stage now talking about Larrabee, he's going over some of the same stuff we've already seen in our Larrabee article.

4:30PM - Havendale motherboard pictured below. Also, Lost Planet performance of Nehalem is around 50% faster than Yorkfield at the same clock speed (a big hunk of this is due to Hyper Threading): 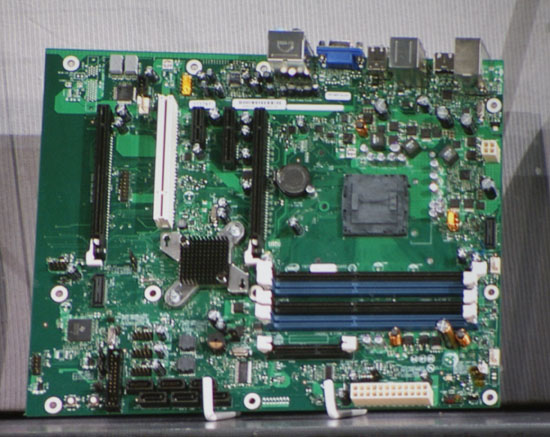 4:26PM - It's time for Lynnfield and Havendale - mainstream Nehalem.

4:22PM - Even though virtualization on the desktop hasn't taken off, it is still really important. Nehalem will refine Virtualization. An issue is in multiple high speed IO devices (like 10 GbE) end up incurring a lot of CPU overhead. Intel's VT-d (the d is for direct path) includes hardware resources for allowing virtualization software to share physical devices directly, reducing CPU overhead.

4:18PM - NASA is going to use petaflops of Nehalem processors to do cool things. Climate modeling and stuff.

4:15PM - Turbo mode will be available in i7. This will allow the CPU to actually increase single threaded performance by increasing frequency of cores dynamically. When not all cores are in use, there will be more headroom (meaning single threaded apps will see a benefit from having cores not in use). Note that this is a different turbo mode from what we've had in Penryn, Intel is actually promising a performance boost here.

4:13PM - Power management on Nehalem will be better than today. Integrated Power Gate technology will take voltage down to zero rather than just decreasing power. Actually building a perfect silicon "power switch" was tough and required some new fabrication technology. The tech is pretty cool, each core can be shut off independently without resorting to multiple power planes. Each core gets its own PLL like Phenom, but there is some clever stuff going on here to make the implementation a bit more elegant. 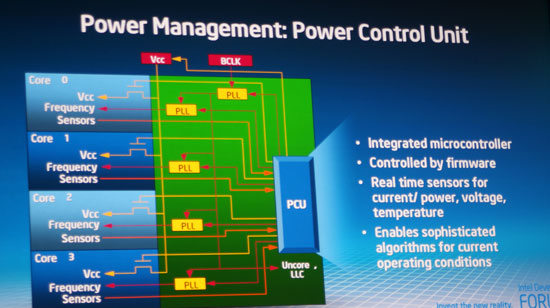 4:11PM - First showing of 8 core Nehalem ES wafer. This will be the server part.

4:10PM - Dunnington (45nm Xeon) will be the last Penryn based core delivered. After this ships (sometime soon) they'll be moving on to other things ... But the cool thing is that this one hits 1 million + on the TPC C benchmark. 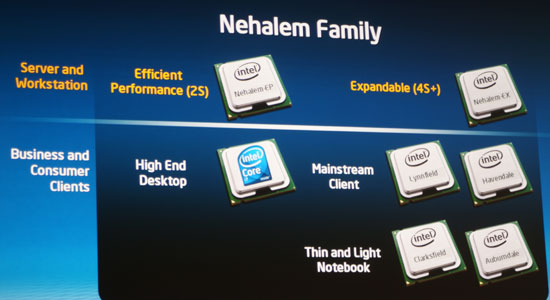 4:09PM - It's time to talk about Nehalem! But first a recap of Tukwila (new Itanium) and Dunnington (6-core workstation/server Penryn).

4:05PM - There's a BMW on stage and they're talking about in vehicle intertainment (or is it infotainment?) or IVI. Yes, this is a very lame naming idea. But combining more functionality into the car is cool. Imagine a digital tour guide talking about the things you're driving by.

4:04PM - Pat played a video of OpenPeak running Atom, basically an iPhone-like IP phone for your home. It looks pretty sweet, like a large iPhone with tons of applications but more home focused rather than mobile focused. 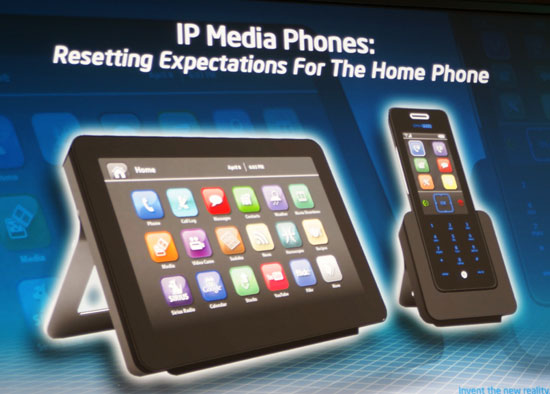 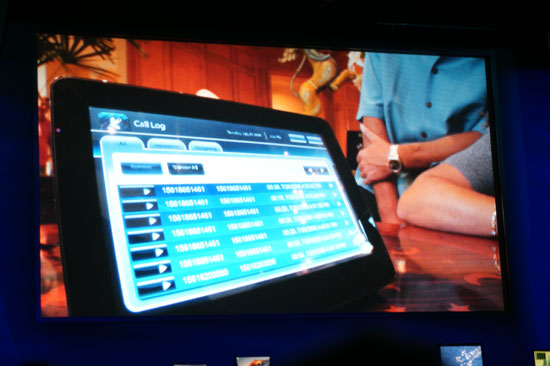 3:59PM - Looking at getting everything on the internet (15 billion devices by 2015) is going to take a lot. Embedded processing is going to be more and more and a mix of low end CPUs and targeted designs like Atom and SoCs. Intel thinks they have the solution

3:57PM - Talking about embedded applications. Over 700 designs based around Atom since its inception. Too bad none of these are smart phones; we'll have to wait for Menlow for that.

3:54PM - Pat is on stage, he promised to talk about Nehalem. Awesome.