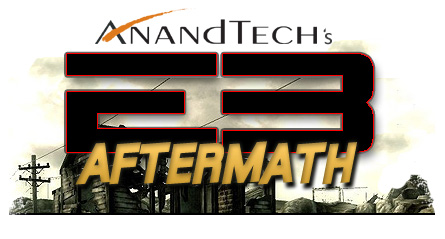 As the smoke clears in the wake of this year's Electronics Entertainment Expo (E3), we look back at some of the highlights from the conference. While games are certainly on the agenda, I'll keep our coverage limited to ones that were not already splattered all over the internet prior to the expo. For instance, I'll not be talking about any games whose titles include the word Gears. Yes, I'm looking forward to that one too, but I do ask that you humor me as we delve in to what's being brought to light for the fifth or sixth time instead of the eighteen hundredth. Can you dig it? I knew that you could!

We'll have quite a few videos courtesy of GameTrailers in our article, as still images don't convey nearly the same level of information as a movie. For those that want more details, there are plenty of web sites out there with additional content. [Hint: Google is your friend!] One option that you might not be aware of is content on your television. Comcast Video On Demand (and probably other VOD services) has quite a bit of interesting content from the show via the G4TV section, including videos not found elsewhere. You can find the same content on G4TV, but as an alternative a large HDTV can be fun for showing stuff to other people.

One topic that seems to come up more often than we'd like is the so-called death of PC gaming. Allow us to step up to our soapbox for a moment to dispel this insanity. While there are certainly many console and cross-platform titles, PC gaming remains alive and healthy. More to the point, there's no comparison in terms of computational power between a modern midrange gaming PC and a console; a $1000 PC can run circles around a console given the chance, and a higher-end setup is in a league of its own. Unfortunately, particularly with cross-platform games we often end up with a lowest-common-denominator approach, which means your DX10 setup may not get a chance to flex its muscles.

One of the reason so many like to sound the death-knell for PC gaming is the supposed slump in sales, supported by the NPD Group figures. The problem is that online sales and digital distribution are not tracked at all by NPD - including all MMOs with monthly subscriptions. Valve also refuses to disclose Steam sales figures to the public, which represents quite a few game sales. There are estimates that total yearly PC sales in the US are easily more than twice what NPD reports, and as evidenced by some of the upcoming 2008 and 2009 titles PC gaming remains alive and well. Console gaming may represent a large chunk of the video gaming market, but anyone claiming PC gaming is dead and/or dying is just crying for attention. Rest assured, we'll still be here in the coming years testing and benchmarking the latest and greatest PC gaming hardware. And with that out of the way, on to the show….

Let's start out with a bang, shall we? First up, we have a teaser trailer for an upcoming PC exclusive title by none other than id Software. Ladies and gentlemen, this... is Rage.

From the creators of Doom and Quake comes a brand new IP utilizing the power of id's newly implemented proprietary graphics engine named Tech 5. As you may have already guessed, Rage is a sci-fi first person shooter. What you may not have guessed is that the game carries an equal focus on vehicular combat and racing. So when you're not kicking butt on foot, you'll be behind the wheel of a Road Warrior-esque dune buggy in a race to the death. Players can expect some insane combat sequences along with the ability to purchase upgrades for their vehicles with their winnings. Rage has been announced as a DX9 game with no plans for DX10 support. Here's to hoping the developers have a change of heart. [Ed: Interesting to note is that Rage for the PC will apparently not use OpenGL as is standard for id Software; however, the Mac version will use OpenGL. Perhaps DirectX has reached the point where Carmack no longer feels it's a handicap, or maybe he's just throwing in the towel as one of the few remaining holdouts.]