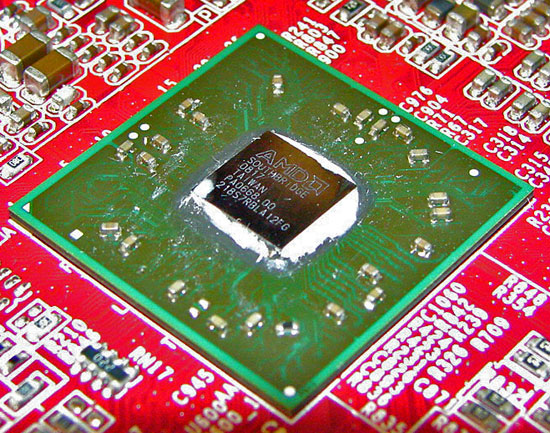 The SB750: I remember when South Bridges weren't built on flip-chip packages

While technically a new part, the SB750 appears to us to be a point upgrade to the SB700. However, it is a major improvement over the SB600 used on the current 790FX boards. Anyway, let’s get into what has changed and what has not.

The SB700/750 features six SATA 3.0Gb/s ports, up from four on the SB600, with the ability to reserve up to two of those ports for eSATA connectivity. Drives can be set up in RAID 0, 1, or 10 and RAID 5 now makes its appearance in the SB750. We just received a beta set of drivers for this new feature, but at first glance, it appears to work fine at this point.

Still missing in action is a native interface for networking support. AMD continues to use an external PHY and MAC for network operations. Although performance is similar to the NVIDIA and Intel solutions, this setup does incur a cost penalty for the motherboard suppliers.

The major improvement in the SB700/750 series over the SB600 is the increase in USB 2.0 performance and the number of ports available. The new dual-channel controller features 12 USB 2.0 capable ports and 2 specific 1.1 ports for compatibility reasons. USB 2.0 performance is now on par with the Intel and NVIDIA solutions.

A single PATA channel provides native IDE support for up to two drives. This channel supports PIO, multi-word DMA, and Ultra DMA 33/66/100/133. Six PCI lanes are still included although we doubt a board manufacturer is going to offer that many. AMD dropped HyperFlash support on the SB700 to make way for the new Advanced Clock Calibration interface.

The SB700/SB750 features four PCI Express lanes for the A-Link Express II interconnect, but like the current 790FX/780G series or upcoming product that we dare not mention, those four lanes are based on PCI Express 1.1 specifications. That means the interconnect bandwidth is capped at 2GB/s, half of what it would be in a PCI Express 2.0 configuration.

Finally, we have the High Definition Audio controller carried over from the SB700 that allows up to 16 channels of audio output per stream. The controller supports up to four codecs with sample rates reaching 192kHz at up to 32-bits per sample.

How it Works, um, Kinda

AMD was extremely vague in explaining to us exactly how the new SB750 South Bridge actually improved Phenom overclocking. At first all we were given was these two diagrams:

It makes it faster.

You see, the SB750...yeah, these pictures really meant nothing to us so we dug a little deeper with AMD.

Here's what we do know:

The SB750 now has a direct 6-pin interface to the AM2+ socket on the motherboard, there are now pins on the Phenom CPU that connect directly to the SB750. These pins were previously unused and are now used as a means of communication between the South Bridge and the CPU. The SB750, in combination with an updated BIOS, can now override some of the CPU's internal settings which can potentially increase the overclocking headroom of the chip.

AMD says that the settings tweak doesn't impact performance and doesn't change thermals or voltages, it simply can allow a Phenom processor to clock higher when overclocking. The BIOS exposes the parameter being changed, which AMD refers to as the Advanced Clock Calibration (ACC) value. Typically this value has a range of -2 to 0, on motherboards with the SB750 that support ACC the value can be set from -12 to +12. Higher numbers should allow for higher clock speeds, while lower values should allow for lower voltages/lower power operation.

Even after further pressuring, AMD wouldn't tell us what this value actually adjusts - simply stating that it makes it easier for the CPU to run at higher speeds. Based on AMD's careful choice of words, it would seem that adjusting the ACC somehow changes the acceptable margins of operation for the CPU cores (the value can be changed on a per-core basis in AOD or BIOS). By loosening these margins, however it is able to do so, the SB750 + ACC combo can enable many Phenom processors to operate outside of their normal overclocking margins. In fact, AMD is confident enough about the technology that they are willing to state that on average; a 100MHz to 300MHz increase in clock speeds is attainable by the user after some tweaking.

The SB750/ACC trick doesn't work on anything other than Phenom processors, and it works particularly well on the Black Edition processors. While AMD didn't rule out eventually enabling this on K8 based cores, it is a Phenom-only option for now. Reaching higher clock speeds is more of a top priority for Phenom, and it's unclear whether or not whatever AMD is doing here can even work on K8 if they tried. AMD also committed to enabling similar tweaks for upcoming 45nm based Phenom parts, implying that this was not a short-term solution to the clock speed problem.

At the same time, AMD implied that the tweaks that the SB750/ACC feature enables could be incorporated into the manufacturing chain and actually implemented in hardware. There's something strange going on here, but as you'll soon see - the tweak actually works.

Microprocessors are designed to operate in even the most extreme of conditions, AMD seemed to imply that its ability to adjust the ACC value somehow changes this. Curiously enough, AMD cited "competitive concerns" as a reason why it would not disclose exactly what's going on with this new overclocking feature. We can't help but wonder if it is because AMD is going a little too far in the sacrifices it's willing to make in the quest for higher clock speeds.