There's always a lot more room for companies in the high-end market, where profit margins are significantly higher. Of course, many times the only difference between competing products seems to be the price tag. In theory, the goal of a PSU is to deliver power to the system components, but they are also becoming something of a status symbol. "Hey - check out my 1200W PSU! It could power a small third-world country. (Yes that makes me awesome!)" None of this is really important if all you care about is delivering stable power to demanding components, but if you want a top-quality PSU design you will need to spend more money. Simply put, you're not going to get equivalent quality of components in a 330W PSU as in a 1200W PSU, because the former faces a lot of competition from inexpensive, marginal units. Put another way, if it costs $100 in materials just to make a top-quality design, you're pretty much forced to build 600W or higher PSUs.

One complaint that we have on many lower rated PSUs is that there aren't enough cables to run high-end computers. If you want 9800 GTX SLI, you will need a minimum of two 8-pin PEG connectors and two 6-pin PEG connectors - or three each if you want triple-SLI. We asked PC Power & Cooling at the beginning of the year if they could make us a power supply rated far below 1000W but with a maximum of connectors to show that it's possible to fire up a triple-SLI system and 15 hard-drives together. At CES PC Power founder Doug Dodson gave us our special version which performed extremely well in our later tests. (We have not been able to test this PSU with the latest 280 GTX cards, however, and given their insane power requirements it could very well be that 1200W PSUs have a place in running such setup.) 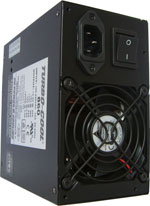 The Turbo Cool series was never intended to cater the mass market. The prices are high but PC Power & Cooling delivers a product worth every penny. The internals seem like they come from another planet, since they don't look even close to what we see with other manufacturers. On top of that, PC Power uses a DC-to-DC conversion for the lower voltage rails, which is similar to what we discussed in our last Silverstone review. The performance was excellent, with only 2.8mV ripple on the 12V rail. The efficiency at medium load was over 88% with 230VAC, which is one of the best results we have seen so far. We continue to see more and more power supplies with high efficiency scores, but they frequently top out around 85% or 86%; hopefully we'll see more competitors with equal results soon. Of course noise levels weren't that great on the Turbo Cool, with a minimum of 23dB(A), but PC Power likes to think first about the health of the power supply and low noise is typically a secondary concern. The price of a little more than $200 is well worth it if you're after quality, and the price in Europe is about the same in Euros (200€) and therefore much higher when the exchange rate is factored in. It would be great if prices in Europe were closer to the US equivalent. 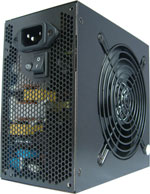 The EliteXStream series is for the hardcore enthusiast and we are surprised about the price, especially for the 800W version. At $155 it is clearly ahead of the competition even though it offers a few watts less in maximum output. Our tests showed this series was designed well, with average efficiency among the high-end units (86% 230VAC, but only 84% on 115VAC). The noise output ranks among the higher end of the options, similar to PC Power, which is good for the system health but not for the ears. For hotter climates, however, that may be just what you need; it has been designed to handle high temperatures and withstood our 50°C stress test without any problems.

We just tested this power supply that was supposed to be one of the quietest options in the market. We weren't disappointed, since the Decathlon 700W only generated 22dB(A) at the highest load possible. The efficiency wasn't best in class, but with up to 85% 230VAC Silverstone has to be ashamed of - a 10% difference in efficiency is meaningful; one or two percent not so much. The price of $174 is rather high unfortunately, and even though Silverstone felt it would drop over time we haven't seen much change to the price during the past month or two. However, while the OCZ may be less expensive and provide more power, $20 more to dramatically reduce noise output could be a useful investment. Also, we'd be cautious about running high loads on this power supply in hotter environments, as the noise levels directly correlate with higher temperatures. 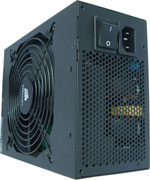 Corsair did well to take their time with this 1000W unit. They brought a very nice product to the market, using an older design from our friend CWT that continues to perform well. There are many cables included in the box for use with the cable management system, so users will be sure to have enough cables and connectors on this unit to fit any need. It was also the first 1000W power supply certified by NVIDIA for triple-SLI use. The output stability and quality is very good and didn't drop at all during operation. The efficiency is again "average" among our top-end units, coming in at up to 86% with 230VAC and 84% with 120VAC. Unfortunately, the fan turns reaches maximum RPMs at only 80% load, which makes for a noisier environment. Again, this is for the best in terms of power supply health, and it will be better for warm climates, but at more than 35dB(A) we would rate the acoustic output as falling on the high-end of noisy. The good news is that under low and normal loads, the noise will not be too high so users of less extreme systems won't have as much to complain about. The $226 price tag is a lot to pay for a power supply, and since availability is still not very good we have hopes that the price will drop in the near future, but for a good 1000W PSU the price is tolerable. 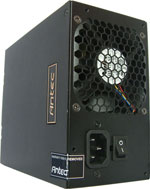 This PSU isn't even available and it's already recommended. From what we in our testing of this power supply, it is worth the high price. The price difference between the two versions isn't that large, so you'll have to decide whether you want to spend $200 for a 650W unit or $40 more for additional 200W. Our decision would be to go for the higher version if you're spending that much, since we never know what new parts will come out for PCs. In general, 650W should be enough for all but the most power-hungry setups, but here a 20% increase in price for an additional 30% power suggests the upgrade is worthwhile. Hopefully with better availability the prices will also drop, and perhaps the gap between the two versions will widen making the lower power 650W unit more viable. In terms of performance, the Antec Signature leaves an impression since it comes with many new features including the DC-to-DC conversion for lower voltage rails. Yes, we saw minor drops in voltage regulation but they are all well within specs. The efficiency is one notch above most other units, reaching up to 87% and 230VAC; more importantly, it stayed near 87% over a larger portion of the output curve. Another plus is that this power supply is very difficult to hear up to around 650W of power output, qualifying as a true silent unit. 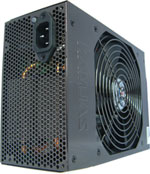 Zalman sent the 850W and 1000W units to our test lab and both perform very well. We liked the heatpipe cooling, and we were pleased to discover it really helped dissipate heat and is not only there for aesthetic reasons. The lower heatsink temperatures resulted in a very low noise level, which stayed low up to very high power outputs. We measured a maximum of 23dB(A) even with higher loads, which makes the 1000W model the quietest PSU above 800W. The efficiency of up to 87% with 230VAC is also one step above many competitors, and from 170W up to 750W of power draw the efficiency stayed above 85% which is great. We saw some voltage drops, but these were well within specs. The one caveat is that this power supply is very long and will have problems with many "normal size" cases. If you are interested in this PSU, make sure your case can support the length of 210mm (around 8 inches). With a price of $175 this unit is definitely worth a look; the 1000W model costs about $55 more, making the 850W model the preferred version for most users. 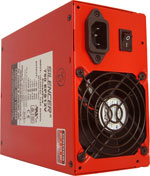 We have added our favorite power supply of 2007, since we saw a very nice price drop from $199 down to $140 during the last six months. This PC Power unit still has virtually everything a new model would bring and we can still recommend users to buy it. Its performance a year ago was very good, with very little in the way of voltage drops and efficiency reaching up to 87%. The noise levels are higher than some of the competition, but the maximum output of 750W keeps it lower than some of the other PC Power options, topping out at 30dB(A) under maximum load. The price of $140 is already a major selling point, but we're now seeing a few models coming in as low as $125 - and there's a $25 mail-in rebate on top of that! That makes this a high-end PSU with a moderate output price, and we recommend this product to anyone with the need for a good quality power supply (as long as prices and inventory stay where they're at). PC Power & Cooling also offers this model in blue, though we still prefer the bright red. 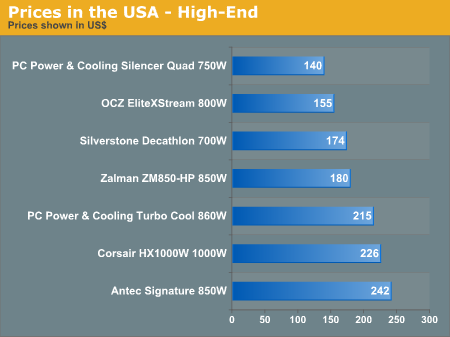 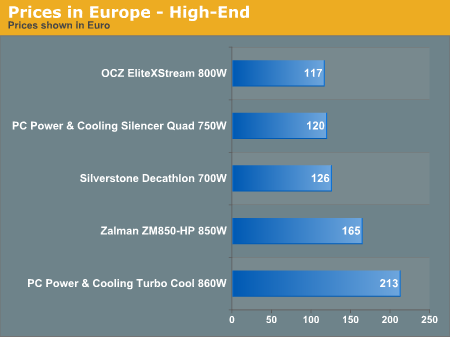