by Wesley Fink on July 8, 2008 5:00 PM EST
16 Comments | Add A Comment
16 Comments
When Canon launched the original Digital Rebel in 2003 the $1000 price point for a digital SLR was ground breaking. In the 3 generations since the original, Canon has added more and more features to their entry DSLR and the price has actually dropped. The current XSi(450D) is $799 for the body or $899 including the new Image Stabilized 18-55mm lens.
Competitors have been pushing the entry DSLR price down even further, however, to the point where the current XSi is now mid-level priced and more expensive that the entry Nikon D60, Olympus E502/420, Sony A200, and Pentax K200D. The Canon XSi competes very well in the mid-range or upper entry market segment, but there has been increasing pressure for Canon to introduce a new lower-priced entry Canon with stripped-down specs. 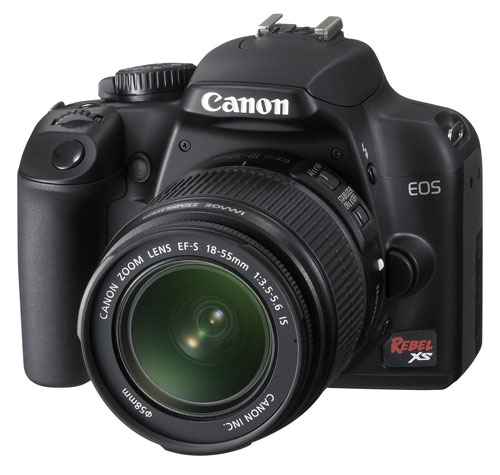 Canon’s answer is the Canon XS which was announced today in the US. With a shrinking world it was a bit of a surprise to see Canon introduce the European version, called the 1000D, almost a month ago on June 10th. Perhaps it is an indication of the increasing power of the Euro and the decline of the Dollar that Canon chose to launch this model first in Europe.

The new Canon XS draws heavily on the current XSi – more so than the previous XTi. It is not just a relabeling of the XTi, since it uses the same new battery as the XSi and stores images on SD cards instead of Compact Flash. The XS can also be fitted with the BG-E5 Battery Grip which was introduced with the XSi.

The table below compares just the items that differ among the XS, XSi, and XTi. If a specification is not listed you can assume it is the same among the entry models.

The Canon EOS XS is expected to ship in August at a selling price of $699 with an image-stabilized 18-55mm lens. This is about $200 less than the price of the XSi model. The XS will compete directly with the Nikon D60, Olympus E-520, and the Pentax K200D.
A Closer Look
Tweet
PRINT THIS ARTICLE
Comments Locked