Tucked away in our NVIDIA GT200 review was a bit of gold. Elemental Technologies has been developing, in CUDA, a GPU-accelerated H.264 video transcoder.

If you've ever tried ripping a Blu-ray movie you'll know that just a raw rip of just one audio and one video stream can easily be over 20 - 30GB. I've been doing a lot of this lately for my HTPC and even without 8-channel audio tracks, my ripped movies are still huge (Casino Royal was around 27GB for the 1080p video track and 5.1-channel english audio track). On a massive screen, you'll want to preserve every last bit of information, but on most displays you could actually stand to compress the video quite a bit.

Using the H.264 codec (or the open-source x264 version), it's very easy to preserve video quality but reduce file size down to the 8 - 15GB range - the problem is that it requires a great deal of processing power to do so. Transcoding from a H.264 encoded Blu-ray to a lower bitrate H.264/x264 can often take several hours, if not over a day for a very high quality re-encode on a fast dual or quad-core system.

Right now transcoding Blu-ray movies isn't exactly at the top of everyone's list, but using H.264/x264 you can significantly reduce file sizes on any video. x264 is the new DivX and its usefulness extends far beyond just ripping HD movies. Needless to say, its use isn't going to increase unless encoding using the codec gets faster.

Elemental Technologies has been working on a technology they called RapiHD, which is a GPU-accelerated H.264 video encoder and the consumer implementation of RapiHD is a software application called BadaBOOM (yes, that's what it's actually called, there's even a video).

Elemental allowed NVIDIA to use a very early beta of BadaBOOM in its GT200 launch, which meant we got access to the beta. We could only transcode up to 2 minutes of video and we weren't given access to any options, we could only choose a vague output format and run the encode.

BadaBOOM uses its own H.264 codec that Elemental developed, we were forced to compare it to the open-source x264 in our tests since Elemental's software won't run without GPU acceleration. We used AutoMKV and played with its presets to vary quality. Even with the awkward comparison, the advantage of GPU-accelerated H.264 encoding was obvious: 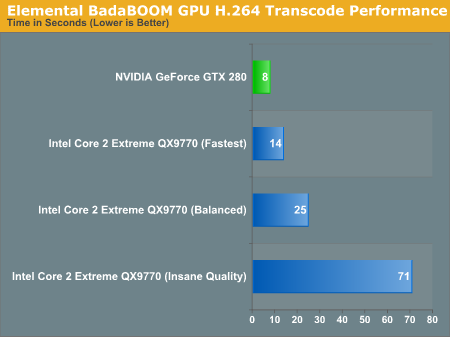 Those numbers are compared to an Intel Core 2 Extreme QX9770, the fastest quad-core CPU available today. In the worst case scenario, the GTX 280 is around 40% faster than encoding on Intel's fastest CPU alone. In the best case scenario however, the GTX 280 can complete the encoding task in 1/10th the time. We're not sure where a true apples-to-apples comparison would end up, but somewhere between those two extremes is probably a good guesstimate.

Given the level of performance we saw with the GeForce GTX 280, we scheduled a meeting with Elemental's CEO, Sam Blackman to learn more about BadaBOOM as his application has the ability to truly revolutionize video encoding performance for the masses.