NVIDIA's GT200 GPU has a significant increase in computational power thanks to its 240 streaming processors, up from 128 in the previous G80 design. As a result, NVIDIA's GT200 GPU showcases a tremendous increase in transistor count over its previous generation architecture (1.4 billion up from 686 million in G80).

The increase in compute power of GT200 is not mirrored however in the increase in texture processing power. On the previous page we outlined how the Texture/Processing Clusters went from two Shader Multiprocessors to three, and how there are now a total of ten TPCs in the chip up from 8 in the GeForce 8800 GTX.

In the original G80 core, used in the GeForce 8800 GTX NVIDIA's texture block looked like this: 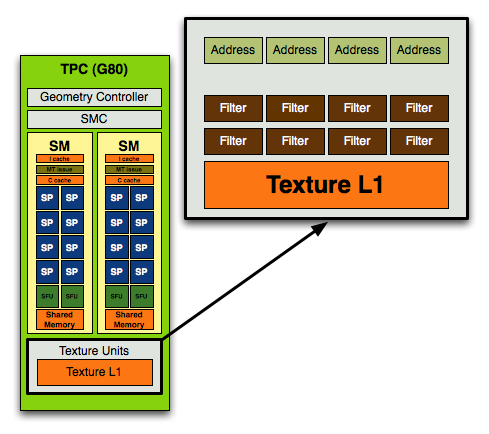 In each block you had 4 texture address units and 8 texture filtering units. 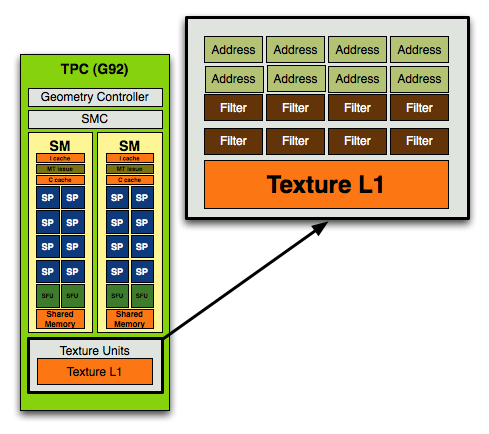 With GT200 in the GeForce GTX 280/260, NVIDIA kept the address-to-filtering ratio at 1:1 but increased the ratio of SPs to texture processors: 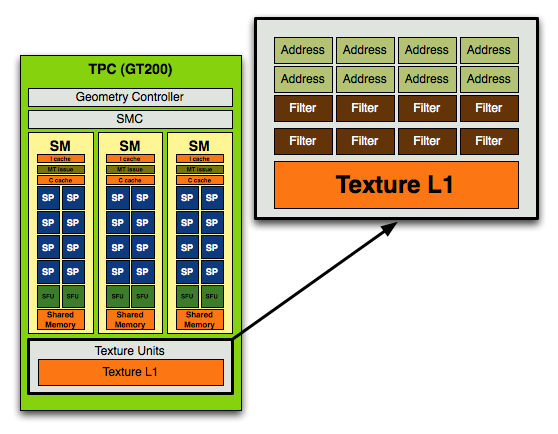 Here's how the specs stand up across the generations:

It also means that GT200's performance advantage over G80 or G92 based architectures (e.g. GeForce 9800 GTX) will be determined much by how computationally bound the games we're testing are.

The ratio of increase compute/texture power in the GT200 has been evident in NVIDIA architectures for years now, dating back to the ill-fated GeForce FX. NVIDIA sacrificed memory bandwidth on the GeForce FX, equipping it with a narrow 128-bit memory bus (compared to ATI's 256-bit interface on the Radeon 9700 Pro) and instead focused on building a much more powerful compute engine. Unfortunately, the bet was the wrong one to make at the time and the GeForce FX was hardly competitive (for more reasons than just a lack of memory bandwidth), but today we're dealing in a very different world. Complex shader programs run on each pixel on the screen and there's a definite need for more compute power in today's GPUs.

An Increase in Rasterization Throughput

In addition to the 25% increase in texture processing capabilities of the GT200, NVIDIA added two more ROP partitions to the GPU. While the GeForce 8800 GTX had six ROP partitions, each capable of outputting a maximum of 4 pixels per clock, the GT200 adds two more partitions.

The end result is a non-linear performance improvement in everything from anti-aliasing and fire effects to shadows on GT200. It's an evolutionary change, but that really does sum up many of the enhancements of GT200 over G80/G92.