Some people determine the caliber of a Mario Kart title by how seamless the item use is. With Mario Kart Wii, one can expect more of the same in regards to weapons of racing, with a few exceptions. Red, green, and blue shells have the same function, but when you get a three pack, they can circle around the base of the kart (a nice return to the older Kart design; the Double Dash triple shell tossing was an annoying aberration) and even be thrown backwards. I found it disheartening that the massive banana peel and Bowser shell from the GameCube Kart have been removed, but I'm also still reeling from the loss of Super Mario Kart's feather. Some seemingly new items are actually carried over from certain older episodes, such as the squid ink from Mario Kart DS (this squirts black goop that blocks the view of all players in front of you temporarily -- not so difficult for humans but a real interference for computer AI for some reason). The Pow-Block is quite possibly the most infuriating new item, it's tricky to find the timing to wave the remote like a madman and avoid getting wiped out. Why couldn't they leave that out and favor the ghost instead? 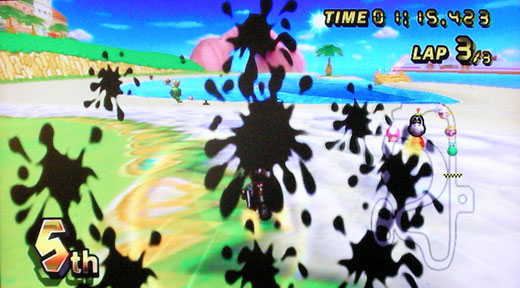 The battle mode of Mario Kart Wii comes up a bit short compared to predecessors. There are two options, balloon battle and coin collecting, but that's where the choices end. If you want to play battle mode with only two people, too bad. Want to play with four? Too bad! Your only option is to be on one of two teams and play with twelve players; other spots are filled with computer or online competitors. Also, the coin-collection battle is one of the more laborious elements of the game. The outcome is almost entirely random and based only on how good the computer AI on your team happens to decide to be for any given match.

Along the same lines, if for some reason you wanted to sign up for a whole Grand Prix cup with another in-house player, you'll have to pull out an old manifestation because this one doesn't offer such antics. Instead, you have to pick each course from whichever cup one at a time until four races are finished, then the total tells you who the winner is… including computer players rounding things off to a crowded twelve. 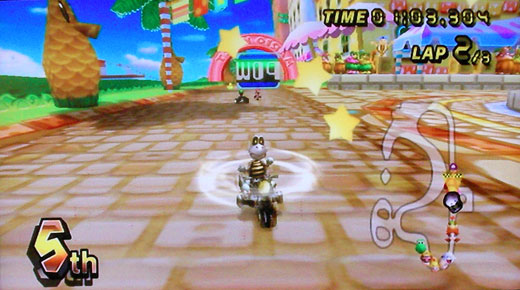 Wiping out with the pow block

Likely the most anticipated element of the new Kart is the online play. The ability to race friends and strangers around the world is a continuation of the Mario Kart DS concept, but it's a little cleaner now. Logging on and getting into a match only takes a few minutes (most of the time) and gives you a window into the rest of the world's racing abilities and how they stack up against yours. You can even enjoy battle mode, though I use the word "enjoy" facetiously. Perhaps I simply haven't been on the right mind-altering substance for that setting to be enjoyable thus far. Online tournaments have already started, humbling me with my apparently pathetic skills. I'm not sure what winners receive, but the bragging rights could be epic.

There is some flexibility for online play to allow for play with only two (or any number) of players when playing in rooms, but this means for those who really want one on one racing you need two Wii systems and two televisions. Gamers can join their friends who are already playing in normal online matches either worldwide or in their region. The pitfall here is that you can't tell if your friends are online while you are playing -- in fact you can't know if they've joined you unless you pay attention to the names of the racers every round.

Additionally, communicating is incredibly clunky and not intuitive when trying to play with friends. There are a couple dozen pages of prewritten messages (you can't type your own messages as we must think of the children), and it was only by accident that we discovered that you need to click on your friend's Miis in order to actually do something like race.

Supposedly when playing online Nintendo will match people up based on skill level, but we see a huge spread of points in races leading to some frustrating results. We often end up in races with many players who have half the points we do. Winning easily garners us single digit points per race while slipping up or getting hammered with items and losing will set us back hundreds. 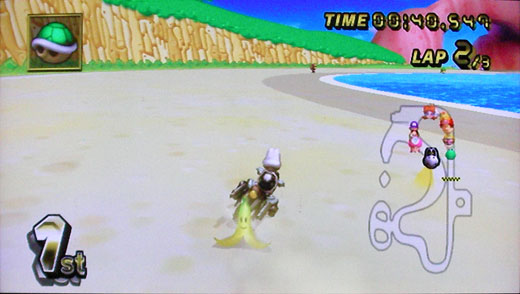 I like that the banana peel can be held behind the player again as insurance against red shells. However, the claw grip required to do this is sometimes uncomfortable.

The last complaint is a large one - race type and course selection is unnecessarily and ridiculously limited for no reason. In online matches we can select random courses but not in local multiplayer races. In online matches we cannot actually select the race type (engine type 50cc, 100cc, 150cc, or mirrored races). As if this weren't bad enough, the game doesn't just remove the option but changes type randomly with no way for the gamer to choose.

While we see a trend of Nintendo making sacrifices that favor the casual gamer over the traditional long time gamer, some of these issues make the game less fun for everyone. It can be difficult for some new gamers who want to play online to race with 150cc karts or in mirrored races. I know at a minimum I'd love to see the ability to exclude mirrored courses as some beginners may really dislike randomly ending up playing different types of races.